On PBS tonight, the show American Experience is showing an amazing documentary called Freedom Riders. I've seen several clips and have read a lot about it and I'd say that it's a do-not-miss. The courage and determination of the Freedom Riders is nothing less than amazing and so admirable.

I'll openly admit that as a Southerner in the U.S., this is a part of the past that I shudder to see footage of. I wasn't there but am still embarrassed and saddened that my home state and region took part in the segregation and violence. I think it's important that we all see this film not only so that we won't forget how far we've come but how far we've still got to go. It's quite uplifting to see the lengths that the Freedom Riders went to stand up for equality. They were subjected to horrible violence and sentenced to jail terms but more and more of them just kept making their way down South until their goal was met. Many of them still work for equality today.

The documentary shows a wealth of incredible footage as well as interviews with many of the people who took part. Truly an amazing story. Watch it if you can: 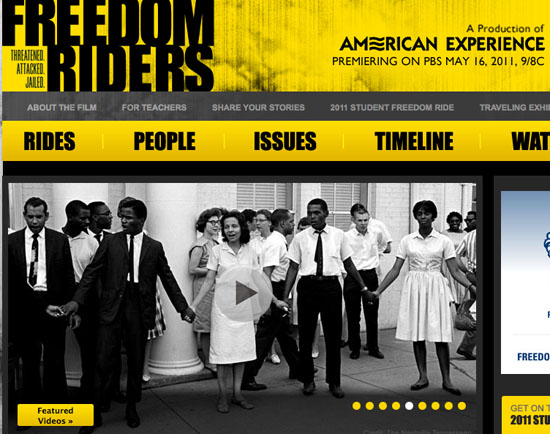 Freedom Riders
Posted by Eartha Kitsch at 10:26 AM

The violence we heap on each other in the name of race is so sad. These people sacrificed a lot, some their lives, so people could be equal. It's sad we still haven't come very far.

I agree wholeheartedly. I just don't get the reasoning behind it at all.

Dr. Arsenault was a professor of mine, and every summer he took students on a re-creation of the Freedom Ride, where we got to not only visit the places things happened, but ride along with the people who were there the first time around. It was one of the most amazing experiences of my life and I am so excited that his research is getting out there... more people need to know this story!

PS. I LOVE your blog. LOVE.

Oh wow...I would love to be able to go on that recreation. You are so blessed to have been able to do that. I know that you'll never forget it. And I agree that everyone should know every single detail. It's imperative.

And thank you so much! You made my night. :)