I love to collect other peoples' memories. Their painted portraits and photographs. Their slides and films. Their carefully penned letters and their scribbles on the fronts of cookbooks. I don't know why but I'm able to completely engross myself in their worlds even if I've never met them. I've always been really interested in people and their stories. Even if I can only get mere clues to those stories from the visual snippets that I find.

Recently, the Mister and I were walking around a really bad flea market and were not only near the end of the aisles but also the end of our ropes from the frustration of looking at horribly boring merchandise. It was then that I saw them - a large pile of 8mm films. 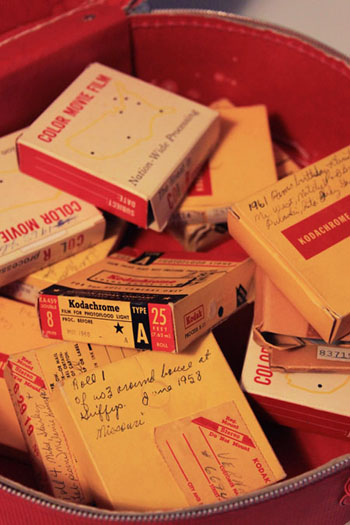 I went over to them and started reading the handwritten notes on the outside:

There were thirteen films in all and they ranged from the mid-nineteen fifties to the mid-nineteen sixties. I was absolutely dying to see what was on those films. It felt like I was meant to find them and they had this incredible magnetic pull. Which was strange because I didn't even own an 8mm projector. And I'd seen 8mm films for sale before and had never taken them home. Before I knew it, I'd bought several of them and the weekend ended with yes, the purchase of an old film projector. Before long, Pam and her family's memories were playing on our living room wall: 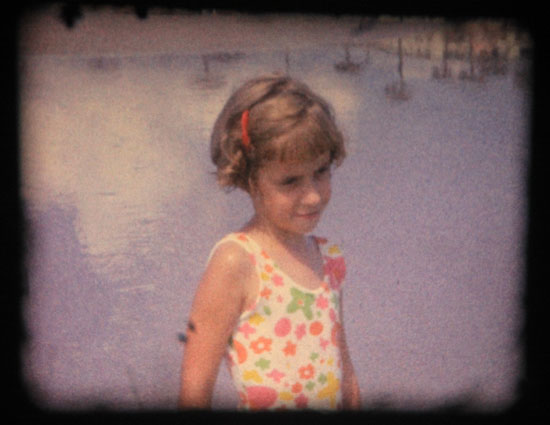 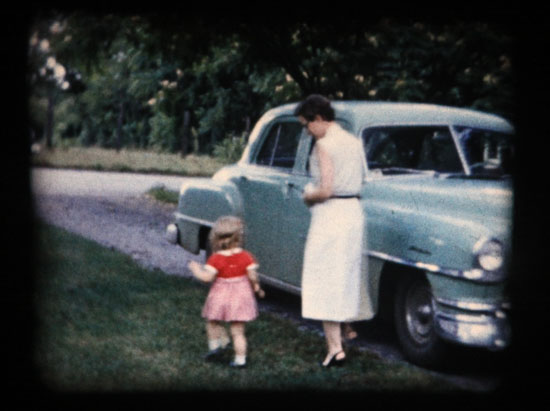 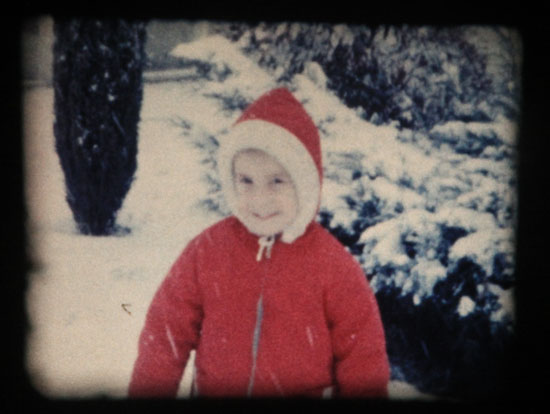 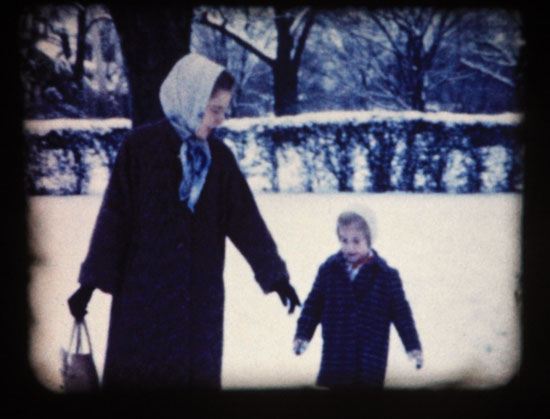 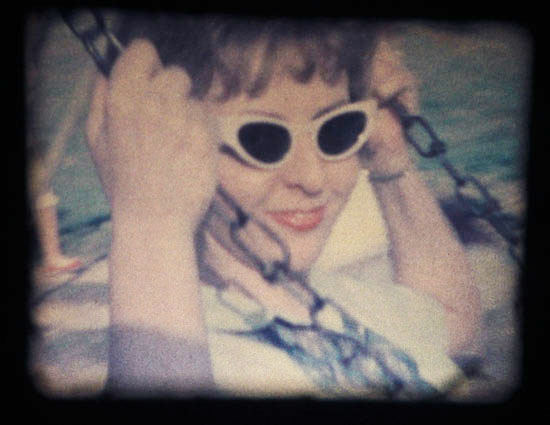 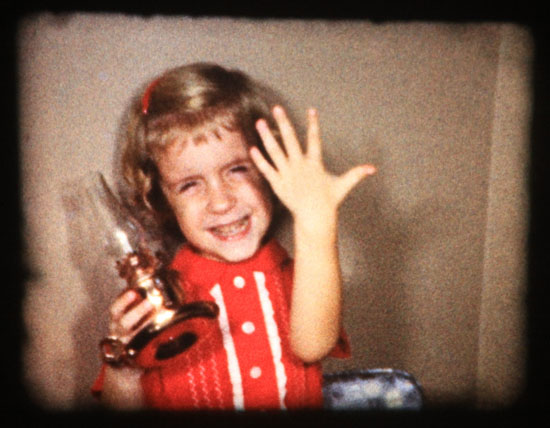 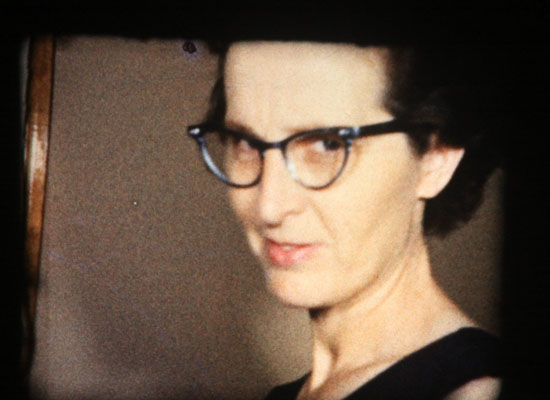 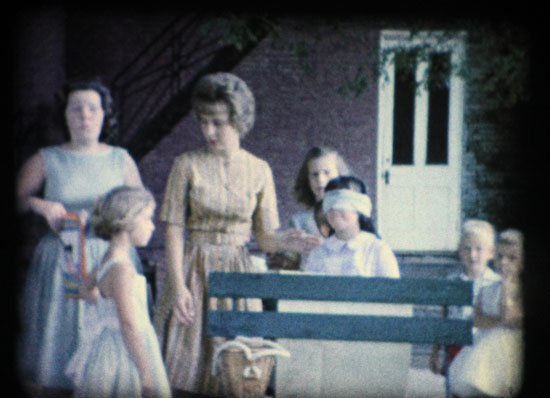 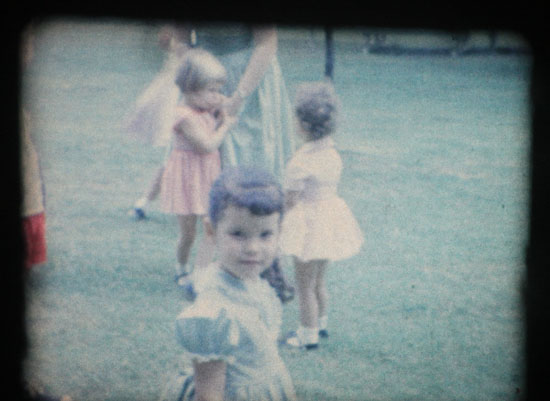 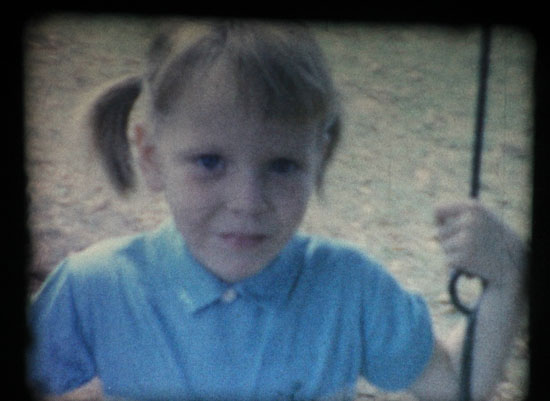 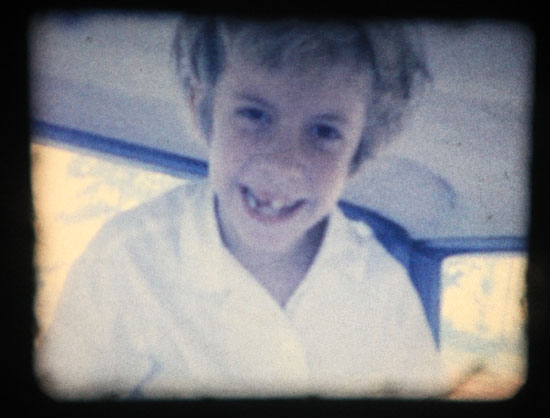 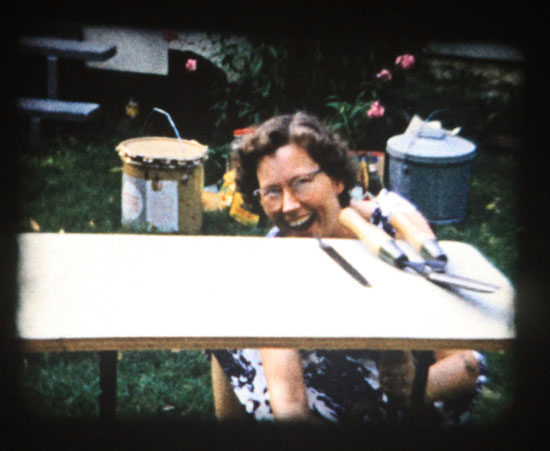 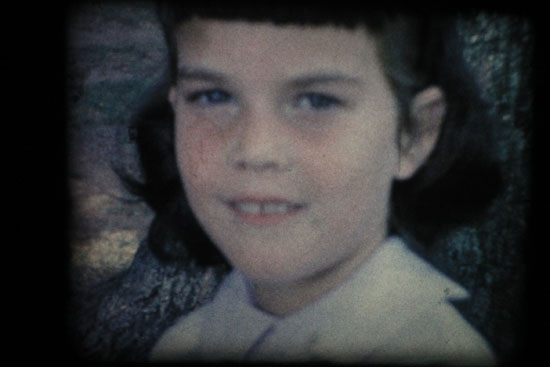 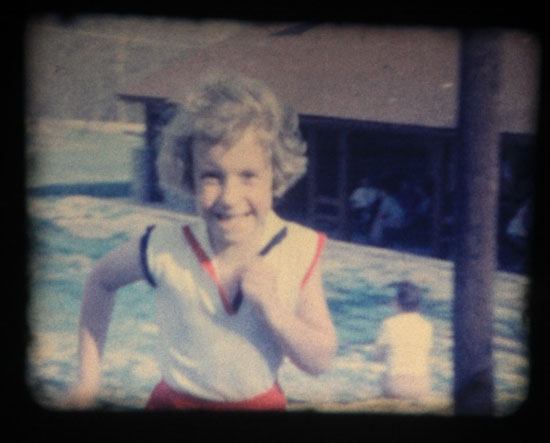 Bit by bit, I went back and got the rest of those films. I've learned since that Pam, the sweet little girl on the films has passed away and that the items from her home were cast off.

Knowing of her early death, it's sad to look at her and her family in the happy times in these films. I feel like I know what's going to happen to her and I want so badly to leap inside of the movie's flickering reels and tell her to enjoy life to it's fullest - to soak it up and then when she thinks that she's had her fill, to soak it up even more. I can't help but wonder why her family didn't keep the films. Maybe it was too sad for them to see her there too.

I'll treasure her movies - her memories - and take good care of them and one day, her collection will merge into mine and be found by someone else - and to them, it will seem like she and I are family. Maybe that's why I found the films that day. In a flea market that I don't usually go to - on that last aisle, on the last shelf. 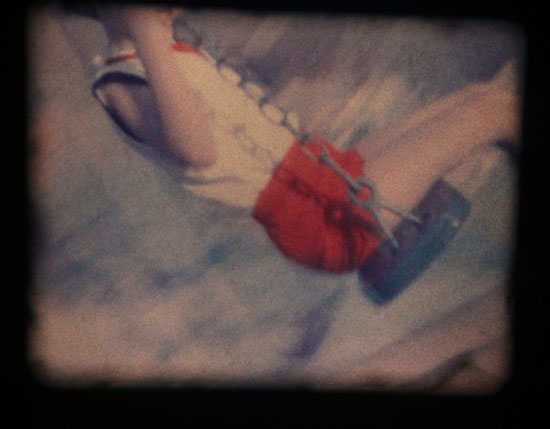 What greater thing is there for human souls than to feel that they are joined for life - to be with each other in silent unspeakable memories. ~George Eliot
Posted by Eartha Kitsch at 10:43 PM

And your writing, as always takes my breath away.

Love you tons, and consider this blog post to be the "making up for" you were talking about. What a gift that made me teary and snuffle a bit. Thank you.

These photos are so touching to me as our ages must be about the same. Pam looks like she had a happy childhood. And I am glad that you are the keeper of Pam's memories.
Candis-mojavegirl

What sweet memories. It makes me sad that her family discarded these memories.

Pam has found a thoughtful steward for her hopes, dreams, and tiny discoveries in you, Eartha. It was a lucky break for you two girls to make your way to one another, or perhaps Pam sent out a wish to be found by an understanding soul, so your meeting up was a bit of destiny.

thanks for the good cry, sweet girl. what a lovely tribute to a happy spirit. i'm so glad she and her memories were captured here -- they're so dreamlike and blissful and what a wonderful childhood she had! -- and you are honoring her. bless you.

Wow. The grainy faded images are so haunting -- and knowing Pam died young makes them tragic, too. I especially love the shot of the woman in the white cat's eye sunglasses on the swing. Amazing.

i heart pam! she must have meant for you to find these!!

This is amazing. You are amazing. Thank you for sharing Pam's memories - they are lovely.

You had me at "Pam and I decorating a tree" Oh PLEASE figure a way to upload that to Youtube!! I can just imagine the vintage decor...sigh

So beautiful and so sad. The pictures you posted have such a magical quality to them, I wish I could jump inside too. I am happy you are the keeper of Pam's memories. I like thinking that someday, far down the road, your collections will merge and you will become family. I hope that happens with me too.....................

oh wow! my husband is greaking out right now because we bought an 8mm projector at the goodwill outlet a few months ago but haven't come across any films to buy yet. what a great find. i love all the stills you've posted.

I find it sad that these things end up at markets and trash cans like the person never existed. No one in my family, save me, cares about this stuff.

Thank God for people like you, to keep the memory alive.

i am the exact same way! i have a huge box of other people's photos that i can't bear to part with. nice score!

You are the sweetest thing ever.
Perhaps someday, one of her family members will come across this post and get goosebumps... and be very thankful that the movies aren't lost after all; that you've been keeping Pam's memories safe in your gentle care.

What a great find. It just so happens that I scored a 8mm projector & a case full of movies 2 weeks ago. Hopefully, I'll have time to post them on my blog soon.

Oh now, you've touched a nerve. yes, peoples lives get disposed of. Most go straight to the trash. I'd be too lucky to have someone like you, care about any of my things after I'm gone.

Somehow I'd feel better if her family had discreetly discarded the reels instead of selling them at a flea market as some sort of curiosity.

Of all the people who could have found them, I'm glad it was you, because you've treated Pam's memory with respect.

I am reminded again why you are my dear friend, and why I treasure you so much. We are all so alike! I would have snapped these up too, and become enchanted with them. I cried when you said that Pam died. Thank goodness that you are the treasure keeper, my sweet friend. Maybe you could put these on youtube also?! THANK YOU FOR SUCH A BEAUTIFUL POST!

These stills are so magical. I too have a big collection of other people's memories but your home movies are so beyond. Thank you for saving them and thank you for sharing!!!

eartha kitsch, you are a gem.

this is just the greatest thing ever.

Oh, hon, what a beautiful post-- you brought tears to my eyes. I'm so happy that Pam's movies found you-- I can't imagine anyone else who would care for them as well.

Great balls of fire, Eartha. What a treasure. They really are. Thank God there are people like you out there, rescuing little pieces of our history! What a beautiful post, and what a beautiful, marvellous person you are.

This is perfection. You are the keeper of Pan's memories. Let it be the joy you keep though, let others carry the sadness. So glad you found & shared.
Cheers, Tracey@Paperdollsforboys

honey,
i cried reading this post- both from the beautiful way you wrote about pam and the photos you chose to accompany your words. then i cried because you totally captured the transitory nature of our existence. every time i think you can't top yourself, you do. this column needs to go to a magazine. you are my amazing sistagurl friend and i am so lucky to be able to call you that.

I love old home movies! Years ago I had a friend who used to do a show called "Other People's movies" where folks could come out and give him their home movies and he would spin records while he played the films on his movie projector. I still have all my family's old home movies (my parents were moving and didnt want them! so I rescued them). I would love to get my hands on a projector one of these days!

What an incredible find. I'm so glad that you, Miss Eartha, will be the keeper of Pam's memories.

What a sweet and brilliant story. You were meant to have those films. No one could have appreciated them more. Thanks for sharing them with us (and wow! those fantastically captured film stills!). Now we can be a part of the story too.
Lovely.

Aah everyone else has already said it before me as I missed this first time round, but great post. You write so touchingly about Pam, she'll live on, even though none of us ever knew her. Looking forward to finding out more. It's also reminded me to make my husband use the video camera he insisted on buying.

You are a soul-sister! Thank you for buying and writing about these treasures. It does my heart good. :)

THis story of you and Pam has touched me deeply.
I just came across this quote the other day from a friend on flickr. Reminds me of you and Pam..

“There are no random acts...We are all connected...You can no more separate one life from another than you can separate a breeze from the wind...” ~Mitch Albom

WOW. How did you get them digitized?