Since there was such a positive response (ha!) to my post the other day about Gloria, the giant beanbag lady, I thought that I would bring you some more fantastic craft ideas from the same book, The Family Creative Workshop: Volume 14 so that I can put it back on the shelf for good bury it in the ground.

And before you start to whimper and whine, let me tell you that the subtext to that book title is "Quilling to Rope Knotting" so hey, consider yourself lucky that I chose neither. Instead.. 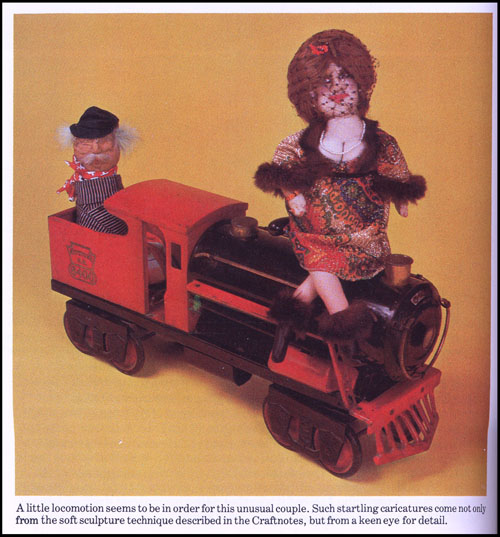 A Little Locomotion seems to be in order for this unusual couple.

And man alive, if those two don't put the "loco" in locomotion, I don't know what does! And yes, they are indeed pantyhose craft. Which you may know gives me the ugly shivers.

How about some close-ups? 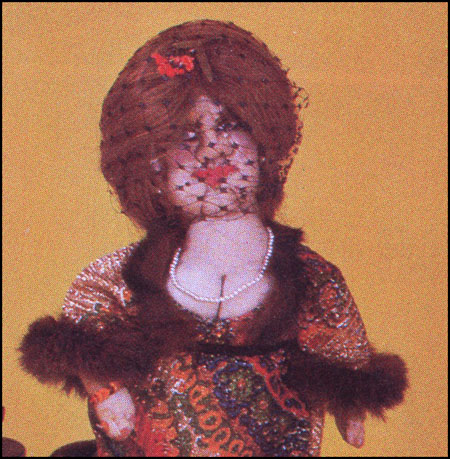 Ohmyheck, that face!
And how creepy is pantyhose cleavage, huh?

Four things come to mind when I look at her:

1. That song with the lyrics, "Ruby...don't take your love to town".
2. That other song about the girl named "Fancy" who turned prostitute to save her family.
3. Belle Watling as done by a man with five o'clock shadow.
4. I should start using anti-aging cream.

And what about the conductor of this little crazy train? 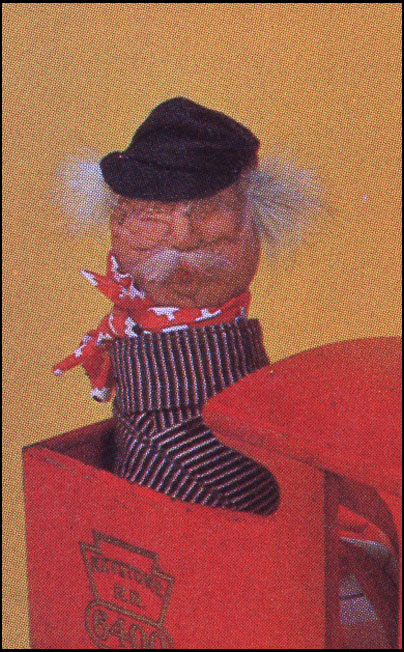 I know what you're thinking: "It's a shame that we can't see him better." 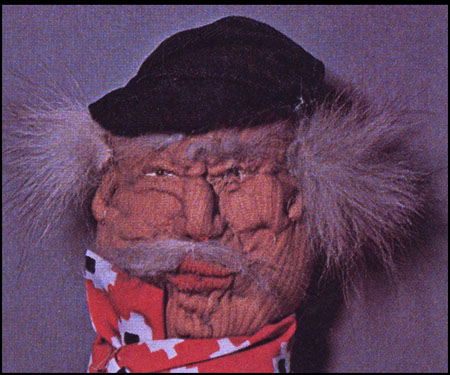 Maybe the text from this chapter of the book can assist:

"Such sculpted heads can be stitched onto realistic bodies, like that on the lady on the locomotive, or on bodies that are merely suggested, like that of the engineer....Or if you prefer, you can make the head pillow-size and leave it at that."

Can you just imagine? 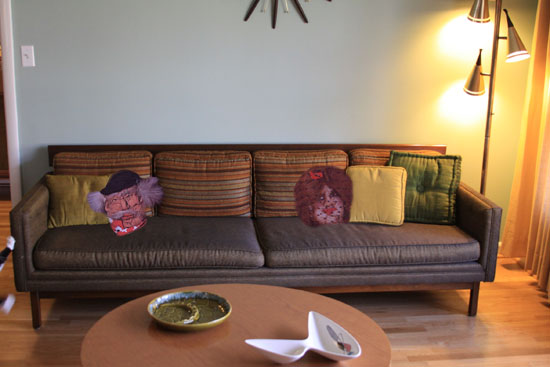 Don't worry. Even in this imaginary scenario, Pip is coming to destroy them.

That's some nasty..nasty business, isn't it? Pantyhose crafting, people. I know that my name is Eartha Kitsch but I can't condone it. I mock it to make sense of it. That's my only explanation.

Okay, now one more for you from the same book: 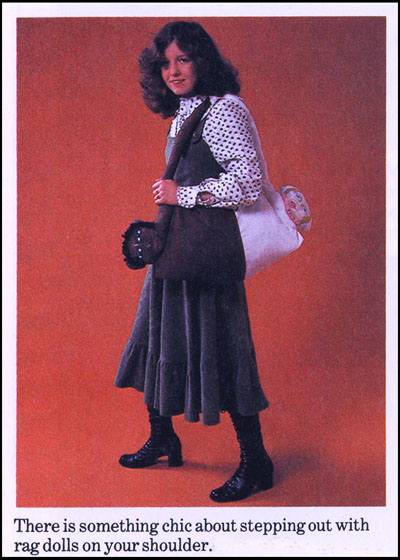 Not that I don't love you but you're on your own with this one.

Posted by Eartha Kitsch at 1:40 PM

Holy god.... What... Idon'teven... And whatever is going on with that bag/purse does not look consensual...

the chic-est thing i have ever seen!

Looks like Pat Sajak isn't the only one who drank on the job! Those are scary. Now I am so glad no one wear panty hose anymore so no one makes these.

that book is pure magic. magic.

oh damn,not just the rag doll purse(which I think might be racist? I'm not sure!)but the girl! her weird stance and 70's hair,love And worm-in-a-sock is clearly Grampa from Hee Haw!

HA! Those pillows on your couch! That purse. I'm going to pee my pants!

Are these better or worse than the pantyhose doll at the thrift with the seam down her face?!? I almost couldn't say...... :D

Let's just say that she's safe with that purse. No respectable robber would take it.

Jeez, I grew up in this decade (70s), and this stuff is frightening to a seasoned veteran!

Eartha - GIVE ME YOUR COUCH NOW!!

Great balls of fire...I'm not going to be able to sleep tonight! TAKE ME TO THE KITTIES!

OK, first of all ... VOLUME 14?! Meaning there are 13 more of them out there somewhere? Dear Lord, how many things can one DO with pantyhose? Surely not enough to fill 14 volumes! Secondly ... who was this pantyhose crafty person? Maybe someone in a mental institution (which they had in the 70s before Reagan closed them all) who didn't like bead work? Or someone not in an institution but who had a whole bunch of pantyhose?
So many questions. I hope I can sleep tonight.

I need this. Never mind all those style books about owning 3 black skirts and a silk scarf, clearly what I was lacking was multi-racial conjoined twins made from tights. For that 'Angelina robbing an orphanage' look.

Pantyhose cleavage is so weird!!! Why on earth would someone spend time on creating such a monstrosity is beyond me! Crafts are supposed to be cute and fun...that is just weird and disturbing!

"Something chic"???
No...Something so freakin' wonderful that I WANT that book!!