A Girl Named Peanut and Rivers of Roaches

From a 1971 edition of Woman's Day magazine, I bring to you the story of Peanut, her marriage of convenience and the cheap rocking chair that drove her to weight loss stardom - and some strange business with her Daddy and brother that I still can't make out. (Ad text below photo) 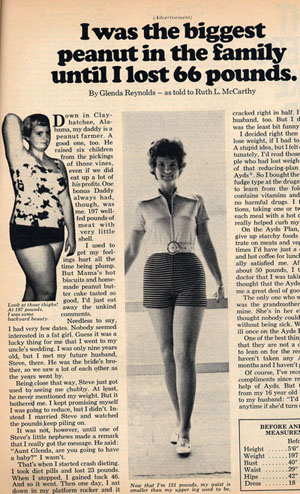 Down in Clayhatchee, Alabama, my daddy is a peanut farmer. A good one, too. He raised six children from the pickings on those vines, even if we did eat up a lot of his profits. One bonus Daddy always had though, was me. 197 well-fed pounds of meat with very little shell.

(Okay, that end part kind of makes me feel funny inside but let's carry on, shall we?)

I used to get my feelings hurt all the time being plump. But Mama's hot biscuits and homemade peanut butter cake tasted so good, I'd just eat away the unkind comments. Needless to say, I had very few dates. Nobody seemed interested in a fat girl. Guess that it was a lucky thing for me that I went to my Uncle's wedding. I was only nine years old, but I met my future husband, Steve, there. He was the bride's brother, so we saw a lot of each other as the years went by.

Being close that way, Steve just got used to me being chubby. At least he never mentioned my weight. But it kept bothering me. I kept promising myself that I was going to reduce, but I didn't. Instead, I married Steve and watched the piles keep piling on. It was not, however, until one of Steve's nephews made the remark that I really got the message. He said: "Aunt Glenda, are you going to have a baby?" I wasn't. That's when I started crash dieting. I took diet pills and lost 23 pounds. When I stopped, I gained back 46. And so it went. Then one day, I sat down in my platform rocker and it cracked right in half.....

(I'll spare you the middle part about the diet plan..and go straight to the end...)

Of course, I've received all kinds of compliments since reducing...But the nicest came from my 16 year old brother. He said to my husband, " I'd marry a fat girl anytime if she'd turn out like Glenda!"

Um, yikes on all levels. YIKES. 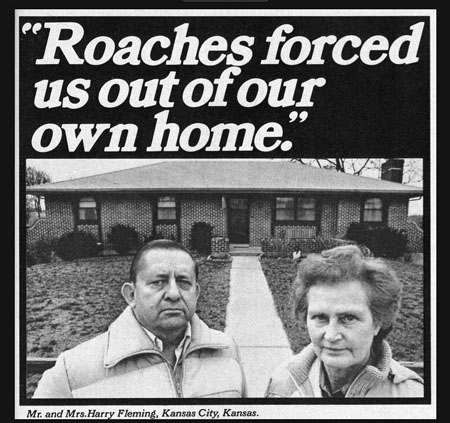 We all just want to be famous for something.

I don't think I ever want to be famous, and if I did I sure would not want it to be for getting run out of my house by roaches!!!!

i wonder if the two stories are related somehow?! haha.

The scariest thing is that peanut's 'before' waist measurement was 29". That's not even close to obese these days!

I'm imagining the roaches 6 foot tall with boxing gloves and a bat yelling 'and stay out' as they boot em out!!

And as for Glenda...hmmm. Also, I hope the bride had a big family. Because she was 9...and I'm picturing your usual 20-something-flirt-with-the-bridesmaids as the future husband. Creepy strike 3!

i'm loving the mental picture of her rocking chair cracking right in half. just lovely.

thank you for sharing! what a couple of gems from the past.

Maybe "Roaches" was the name for the local hoodlums!

Wow, that ad copy must have been written by Freddie from Mad Men, not Peggy!

I cannot BELIEVE I missed Peanut's story until now! I almost expected she's kick ol' Steve to the curb once she was skinny.