This and That and Stuff

Mister Kitsch has been on vacation this past week and we seriously partied it up. Which for us means diner food, junking and court.

First up: Court. The Mister had to go testify against this guy who robbed him and I asked if I could go. Being fascinated with all aspects of the court system and quite a fan of the crime shows, I couldn't even sleep the night before because I was so excited. In the end, it wasn't as great as I thought it would be. The docket was overflowing that day so we had to sit out in a hall for five hours straight with hundreds of other people. We kept getting ordered around by bailiffs who apparently act under the impression that every single person coming to court (even witnesses) are there to knife somebody. I wish that I'd taken the pen that my friend who works in a jail sent me that says on the side It's a pen. Not a shank.

The Mister spent a good deal of time sitting next to a creepy guy who was there for choking out his girlfriend and I practiced my supreme lip reading skills while deciphering what lawyers were whispering to their clients. I'd softly whisper the play-by-play to the Mister so he wouldn't miss the action. We were both fascinated with the courtroom fashions. While I'd never imagine wearing lucite stripper heels or pajama pants (or the two together) to court, I was in the minority. And while we're at it - hello, people...jeggings. What the? Jeggings are the closest that one will ever come to seeing a complete stranger naked. I couldn't believe that just that morning, I had given the Mister grief for attempting to wear a flannel shirt to court. Basically, waiting for court means checking people out - while pretending that you're not checking them out. And playing the Are They Wearing Underwear? game.

In the end, we got to go into court for about an hour and I had a blast. Each time that another inmate was brought out in shackles, I thought, "Yeah!" There were smirking teenage shoplifters and lots of burglars on board. And one guy who kidnapped and beat up some poor lady and straight-faced referred to what they had as "a relationship". The Mister's robber ended up striking a plea deal so unfortunately, we never got to see him or yell profanities at him. And even though he'd merely stolen a projector, I think I had the Mister convinced that he should fake cry and shriek at the burglar, "You ruined my life!!" before falling out of the witness chair and collapsing onto the floor. So I was even more bummed that the case didn't get called up.

The rest of the vacation was spent on yellow food: 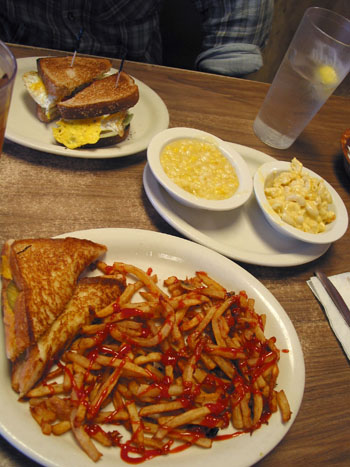 I think that we went to every diner in town last week and I had grilled cheeses every day. 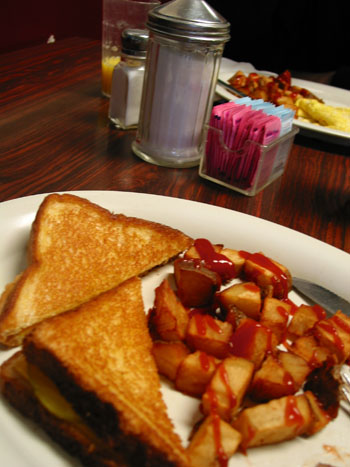 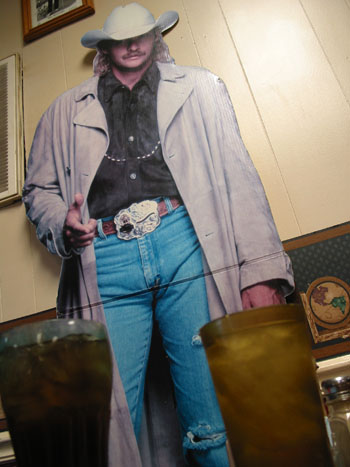 I also applied for my first passport ever. This was one of my prospective passport photos: 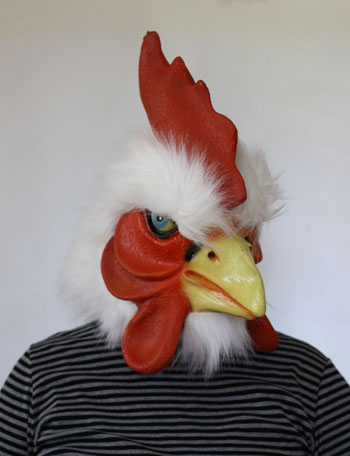 But apparently, the government does not have a sense of humor.
Cock-a-doodle-meh.

We went to a lot of junk stores and thrifts. Where we did not buy this: 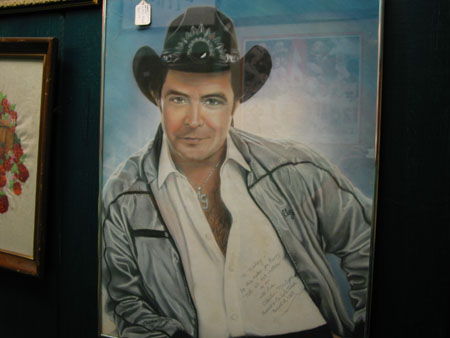 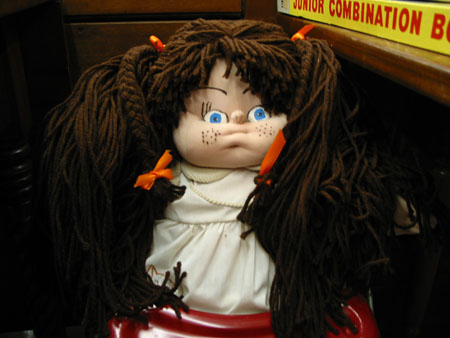 But we did buy this: 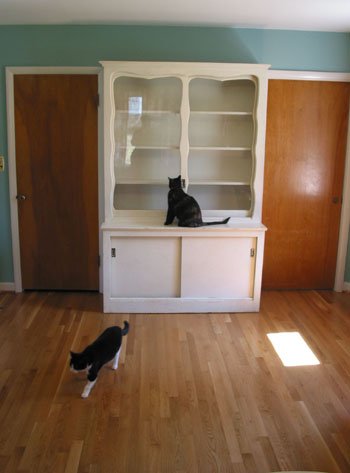 A ridiculously enormous and heavy glass-front cabinet. It intimidates me with it's display potential. So far, I just clean it and stare at it. And warring factions of cats do battle on and inside of it.

The vacation week ended this morning with my having this crazy dream where Robbie from knitxcore and I (even though we've never actually met in real life) were working on an undercover case, trying to expose the American Eagle Outfitters clothing company for getting free pets off of Craiglist and using them to make fur collars for denim shirts. Yes, my dreams are morose.

Apparently, they had contracted Robbie to knit collars for them but at the last minute, turned to pet fur and boy, were we angry. We were totally going to bust them too! The action and adventure ended when the Mister woke me up to let me know that he was taking one of our cats in for a nail trim. Thus our usual mundane life of work days and chores resumed. Sigh.

I hope that all of y'all have been doing good!

Until next time,
x's and o's,
Eartha
Posted by Eartha Kitsch at 1:32 PM

Mmm...grilled cheese, mac n' cheese, the ultimate comfort foods...I'm thinking of having that for dinner tonight! Yum! Yellow food is the best food!

Courthouse characters and yellow food - it's a vacationland of rapture not even the most skilled travel agent could deliver. Loved your court story and am so sad the mister didn't get to display his dramatical skills (or anything ELSE if he was wearing jeggings!) on the stand. I love your magical kitty condo of kitsch, btw.

OMG!!! Robbed!!! Uggghhhhh, that is horrible. I would have loved it if you could have played your scene out in court, just like an episode of Perry Mason!

I have to admit, I STILL do not have a passport. I'm not sure what I am holding out for. Maybe one of these days I'll break down.

I am super excited to see what you do with that cabinet, it's gorgeous!

Sounds like a helluva week!
Hope you both had fun!

oh man, we need to have a lunch date so we can eat grilled cheese and talk about crime shows and kiddie pageants. i have always wanted to get jury duty so i can see what goes on in court! i friend of mine got to be on the jury of a drug dealer! so exciting!
that hutch is great! i'm on the lookout for one for our living room, but i can never seem to commit.

LOL, I've had those same eye-opening revelations with courtroom fashion when I've been in court before. It's amazing that people don't know what to wear - or more like they don't have the proper clothes.

If I *ever* go to court, please come with me. I'll pay you in as many grilled cheeses as you WANT. (Very sorry to hear The Mister was robbed, though. Ugh! And that you had to see anyone in "jeggings".)

The cabinet is *beautiful*! Love it! Especially the scalloped edges.

And I thought my dream of being best friends with Leslie Knope and getting lost on our way to a concert was sad. At least no pets were being killed!

What do you think the robber wanted the projector for? Do you think he found a lot of home movies he needed to watch? He needed it for a class he was teaching? (Like: How to Rob People.)Maybe he thought it was something else, then when he got it home realized, oh, man, it's a PROJECTOR.

Or maybe I'm way out of the loop and projectors are hot items?
Kate H

I'm a big fan of the Yellow Food Group myself - and usually don't realize it 'til I snap a photo of my meal and Retro Roadhusband chimes in, "My, that's beige!" - NOM however!

Sounds like a fun week, and glad you could make court entertaining!

That Alan Jackson cut out is GETTIN' IT, OMG. We found a wood-laquered, limited edition Billy Ray Cyrus (!!) wall clock/plaque at the Rivergate Goodwill a couple months ago... I actually couldn't believe I was holding it in my hands. You had me cracking up about the court, too... on the drive downtown every morning, we always wonder at the mix of lawyers/court employees in suits and business attire ("presenting" in court) and people in sky-high stiletto boots, red jeans, and tweety bird shirts type combinations ("apppearing" in court) in front of the courthouse. It's a beautiful kind of real life Where's Waldo. So surreal!

You do make me laugh. Not that your mister being robbed is funny or anything, but every cloud and all that. Here the best fashions are seen when taking one's children to school. Pyjamas are apparently ok to wear in the playground. And leggings which are so thin they've become tights and show every inch of cellulite. I just do my bit for embarrassing my kids by wearing my heart shaped sunnies and sometimes forgetting to brush my hair.

I'm fascinated by the court system as well. I tell people - proudly I might add - that I've sat on County, Federal (in which I was the foreman), and even testified!

I usually tell them in this order to see the look of shock as if I was busted for ratting on a mob boss or something. I was also robbed once and it was to stand up and point a finger at the hoodlum in the orange jumper to identify him. A lot to do about nothing really since I actually almost fainted in the courtroom, and I think my voice broke once.

I love all the food adventures you and Mister went on and am kind of bummed the little Cabbage Patch girl with freckles for eyes didn't come home with you. I've been on the verge many times of purchasing something like that too just for "effect," but I guess that's what cameras were made for!

That cabinet is fabulous!

I'd be afraid my bulldogs would do the same thing, though, too.