Today I want to tell y'all about one of the coolest ladies that I know - and her equally cool car. I met Theresa Thompson on Flickr and she has some of the best photography technique that I've ever seen. She's not just skilled but also crazy creative with her photo ideas, many of which have a perfect retro twist. I always get excited when I see a new photo pop up in her photostream. And on top of that, she is such a sweet person. You might be asking yourself how she could get any cooler. 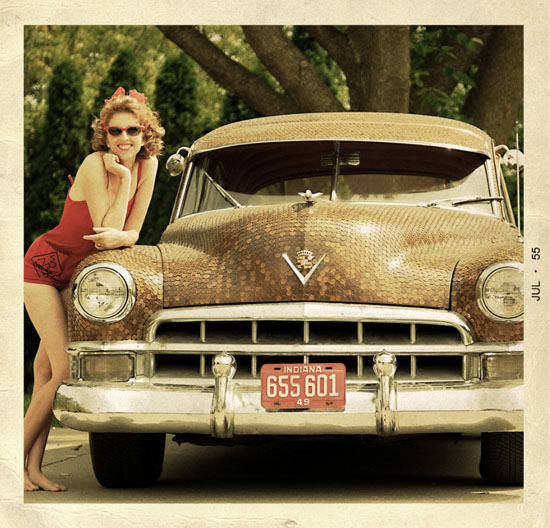 Yes, folks. She's a stunner and she owns a 1949 Cadillac covered in pennies.


Theresa was kind enough to give us a little chat about her car which is aptly named "Penny".

Penny is a incredible! Did you and your hubby Larry own her before you got the idea to have a penny covered car?

We actually shopped for the perfect car to cover in pennies and were ready to purchase a Lincoln (figuring that to be the perfect penny car) but decided to go look at one more car. When we got there, she was the color of a penny and we decided that she was the one.

How was the idea for a car completely covered in pennies born? Did you hesitate at all or were you at the bank getting buckets of pennies the very next day?

I remember waking up one morning and telling my hubby, "I think we should get a car and glue pennies all over it." and all he said was, "ok."  We started shopping for the car that day.

I was so excited about transforming her when we first brought her home, but after she sat in the garage for a month, I felt myself loosing my nerve... I knew it was right then, or never so I started gluing pennies on the visor first, figuring if it looked terrible I wouldn't have ruined the car, I could always remove the visor and no one would be the wiser.

I love that you just woke up with the idea! Were any other embellishment ideas thrown around before deciding on pennies?

It was always going to be pennies. We have since talked about transforming my VW Beetle and thrown out different ideas. The key is if you're going to glue something on it, you have to use something that won't be too heavy (the pennies added a little over 200 lbs to the car!) something that won't fade or break too easily, and nothing that anyone would steal. 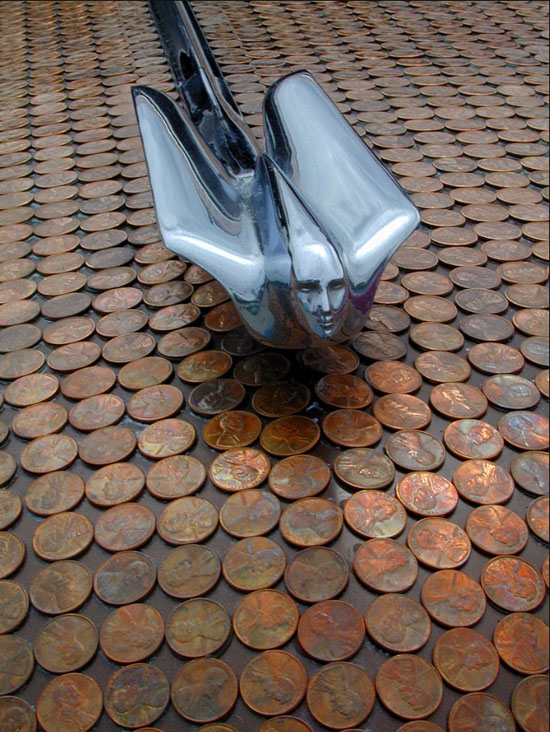 How much time did it take to install them all? Did you and Larry put all of the pennies on by yourselves?

Larry, my two boys and I glued on the majority of the pennies, but neighbor kids, nieces, and nephews... We had lots of helpers. We ran into our neighbors after we'd finished the car and they confessed that one evening after their son came home late for dinner, he was grounded for lieing after stating that he had to stay and glue money to our car. They were surprised to see us driving a car with pennies glued all over it.

That poor neighbor kid! I bet his parents believed him from then on! How many pennies are on Penny?

There are 38,295 pennies (I'm so glad that we had the forsight to count them as we were putting them on. Everyone wants to know how many and it would be impossible to count them after.) The pennies are all American pennies and all heads up (with the exception of four tail side up. Each family member glued one penny on tail side up, it's kind of a "Where's Waldo")

It looks like you take Penny to classic car shows. I know that a lot of times, the last thing that car owners want visitors to do at car shows is to touch the cars. I love that Penny has a sign encouraging people to touch her. How do people generally respond to her?

We get asked to show her once or twice a year, so we usually do. We're not really car show people. I would much rather just take her out for a drive, but Penny is definately the belle of the ball. Kids love her and they always ask, "Are you rich?"

Penny is the first "art car" we've ever owned, but I doubt if she'll be the last. I would recommend transforming a vehicle to anyone. It's like being in a parade where ever you go. 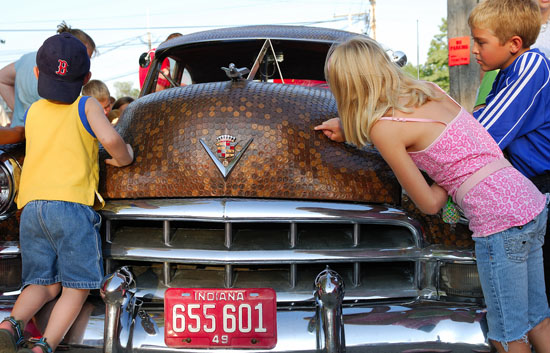 I love that little kids think that you're rich! Do you polish all of those pennies or do all of the folks rubbing them for good luck keep them bright and shiny?


For several years we would polish her a few times over the summer, but we eventually put a clear coat over the pennies to keep them from tarnishing. Before we coated them she would always get two real shiny spots just above her headlights from people touching her. 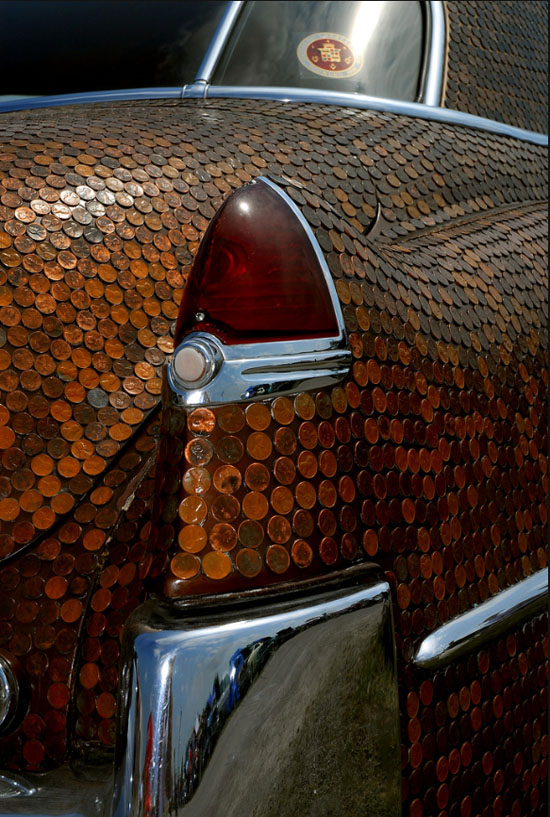 Tell us anything that you'd like us to know about Penny. A Penny for your thoughts!

It took us six weeks and lots of silicone caulk in 1999 to adhere the pennies one at a time. I like to think that we were just fulfilling her destiny- She was born to be a penny car. I can't imagine ever parting with her, but if we were to ever sell her, the advertisement would read "1949 cadillac in mint condition." 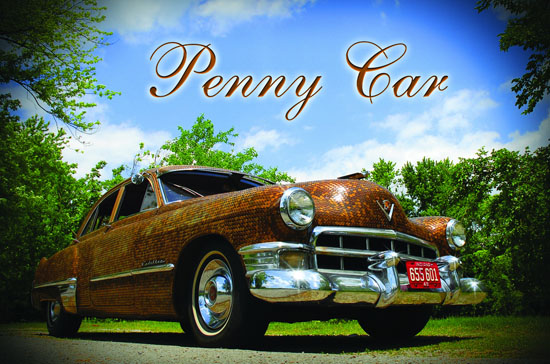 Thanks so much to Theresa for sharing her lovely Penny with us!  I hope that I get to see it in person one day! All photos here were taken by Theresa. Stop on by her Flickr photostream to see more snapshots of Penny - and all of her other awesome photos.  I promise that she'll often make you laugh and more often that that, will inspire you. And take a look at this fun video about her process and inspirations that the local Fort Wayne, Indiana news station did:


That girl is a delight, isn't she?

Buckaroos, what do you think of Penny? What would you embellish your own car with if you could?

That's amazing; I didn't think I would like the car, but after seeing it, I love it. I would never have thought to do something like that to a classic car, but it is really cool.

Wow! I would never think to do that, and if I did, I'm sure I wouldn't ever go through with it. Thanks for sharing. Really cool stuff.

Wow! What a cool chick AND a cool car! They deserve each other. : ) I think that my car would be covered in marbles ( the cool old glass kind....if I could afford that many).

wow! i was wondering what kind of car you could possibly post, i knew it wouldn't be just any vintage car! i love that they did it so quick after just waking up with the idea!
i would love to cover a car cool old bottle caps! they have some of the best graphics!

What a great car and person! You surely have a cool friend and I love her look - her personal look in the photo!

Wow what a beauty! It really is lovely all the variations in color. The whole time I was reading I kept waiting for her to spill on what kind of adhesive she used. I'm glad to know that silicone caulking is the perfect medium...just in case I decide to make a "change" with my car!

It's! So! Beautiful! I really almost can't believe how beautifully it turned out AND they did it themselves. I do feel sorry for that kid who got grounded for lying about "helping to glue pennies to his neighbor's car"-- doesn't that just SOUND like something a kid would make up?

Well for heavens sake ! :) Thx for sharing this one whaaat fun !! E

Thanks so much! I feel honored to be blogged about by the amazing Eartha Kitsch.

Oh wow! That car is amazing! Such a fun idea!

Who would have ever thought covering a car with pennies would look so good? And I love her photography! She really has found her niche.

That is absolutely gorgeous! I'm an impatient crafter, I cannot imagine the dedication it took to create that masterpiece. Thanks for sharing, gotta check out her work!

Wow, that car is so, so cool! And she DOES make the perfect June Cleaver.....so cute!!!

What an inspiration! The car is gorgeous and Theresa's fun-loving approach to creativity and life is wonderful. Thanks for posting this!

This post made me smile ear to ear. But actually you have a way of doing that with your wonderful writing quite a bit!

What fun and dedication to an awesome idea. Thanks for sharing
Diane
Honey Stop The Car