George Will Be Missed

I just learned that good ole George Jones passed away this morning. The news gives me such a heavy heart. Talk about a legend - he was one of THE legends -  not only in Country music but also in this town. 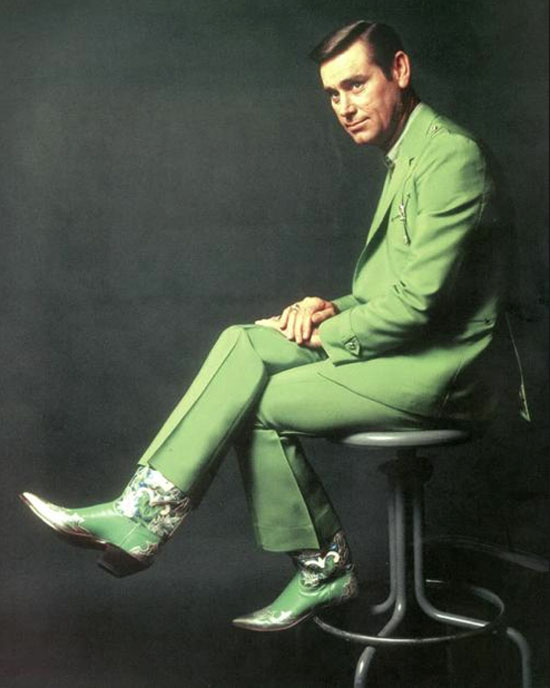 It really feels odd knowing that he's not here anymore, kind of like a family member has gone away. It was a good feeling just to know that he was kicking around the same town that I was in. Unfortunately I never ran into him but probably could have if I'd really tried. The loss of George definitely feels like the end of an era as I've heard his songs my entire life. My great uncle Glen has pretty much worshiped George for decades and I'll never forget the glee in my Grandfather's voice when I told him that I passed by George's house on a regular basis when I lived in a more rural part of Tennessee. Since George had infamously been arrested for driving his riding lawnmower down a county road with a bit of a buzz on, every time that I talked to my Grandfather after that, he'd ask me if I'd seen George riding his lawnmower down my street. He'd never really understood why I moved far away to Nashville before that...but after I told him about George, he actually seemed tickled that I was here.

George was also known as quite the rebel. He was notoriously late to appearances and he missed some altogether. He battled alcohol and drug addiction off and on throughout his life. He definitely lived the lyrics from some of the most hard-scrabble classic country songs but through it all, he was known as a good guy. I read a note online today from a soldier who said that George picked him up while he was hitchhiking back in 1966 just North of Knoxville, Tennessee. He said that George had sung country songs with him along their route. That soldier was on his way to Vietnam and said that it meant the world to him. I'm sure that it did.

Oh George...he will definitely be missed. You can read more about his life here.


In true George Jones form, he might be a bit late getting to Heaven but when he gets there and gets settled in, I hope that he'll ride past my Grandfather's eternal mansion and give him a big ole wave from the seat of his heavenly lawnmower.

i'm so sorry to hear this. when i think of george jones i think of going by his house to see the christmas lights every year.

I'm very sad about this, too. His music was a big part of my childhood. Any time I even THINK about "He Stopped Loving Her Today" (let alone hear it), I get chills.

What a bummer. He was one of THE BEST song interpreters in country music, period. Like Elvis, he could take the most mushy, goofy song and make it sound like something special. I just finished "Tammy Wynette: Tragic Country Queen" by Jimmy McDonough and along with the rabble-rousing and hell-raising and general craziness of the Possum, there were lots of instances like the one you mentioned of him showing kindness or generosity to a complete stranger. Isn't it weird living in Nashville and considering some of these old time celebrities like your family? My mom sent a card to Johnny Cash when June passed away... who doesn't care anything for celebrities at all! Something about how accessible they were, through their songs and their appearances, makes you feel like you knew them personally.

Old school country singers always make me miss my Grandma--those were the songs I grew up with, too. That suit with those boots: You just don't see that today, and it's a shame.

such a sweet tribute! I loved George Jones like my parents did and there was nothing like a duet with him and Tammy. I can still hear him sing "He stopped loving her today" and "Coat from the Cold" from my dad's old 8-track in his truck as we drove along rural Oklahoma. Dad loved George and I loved dad........I'm very sad. I'm glad I found out from my cyber friend Eartha instead those idiots on the news! KK

He was Country & Western royalty. At the end of the day, he will be remembered for his beautiful voice. Who would have predicted George Jones would outlive Tammy?

I cried. And cried. And cried. I'm still a bit teary two days later. That voice has been in the background all my life. My grandfather was a HUGE fan, as was his best friend...who could do a spot on George impression! It really is like losing a family member. He was a pistol and he'll be missed. He asked, "Who's Gonna Fill Their Shoes?" No one will ever be able to fill his.

He's been there, as a musician and a character, as long as I can remember. My Grandaddy liked him and so did my high school boyfriend. He had his own special and well-earned gravitas. I was at Goodwill for quite some time yesterday and there was this lady that kept asking people if they liked George Jones and did they know he had died. No matter what their response was she would say, "Why he was a livin" legend in his own time!" Bless it :)

Such sad news! He was definitely one of the last of the Old School Country music performers.

I remember my parents hanging around in the taverns and "He Stopped Loving Her Today" would come on the jukebox. Just thinking of that song makes me cry.

He Stopped Loving Her Today is one of the greatest country songs EVER written.

I wanna be in a bar right now putting my money in the box to hear it.