The Therapeutic Nuances of Granny Crafts and Baking

How have you all been? Great, I'm hoping! It seems like forever and a day since I've been able to sit down at Ranch Dressing. I've missed it. Life has been bazonkers and I've had one hell of a week. Yesterday, I woke up on top of my bed covers,  in my street clothes after pulling a near-all-nighter (animal rescue...not doing beer bongs, I assure you) and soon found myself in the kitchen, eating straight out of the breadbox while saying out loud to nobody at all "I love ciabatta bread...desperately."

It's when you're romantically talking to a hunk of bread torn straight from the loaf while standing in yesterday's rumpled clothes and smeared makeup that a person realizes that it's time for a little "me time".  I had seriously burned out....simply crashed and exploded. Thankfully, Mister Kitsch took me out for a little kindness that included tomato soup and a fat grilled cheese and then the great suggestion that we stop at a church rummage and bake sale. I'm usually up for anything that goes down near grannies but I was so tired that I resisted a little at first. It was soooo worth pushing through the exhaustion though. The yard sale wasn't much but as we were walking away, a woman said to us, "There are little ladies selling large pies downstairs."

The next thing I knew, we were in the basement of the church, completely flanked by senior citizens.  A whole recreation hall full of them. Hello, Heaven. We bought a ginormous homemade apple pie and then stepped over to the craft table. At first, I thought that maybe the children of the church had made the items which would have made them precious enough - but then I learned that the senior lady manning the booth had made them herself. A woman after my own heart! She had pinecone turkeys with pipe cleaner gobblers and googly eyes as well as yo-yos made out of painted balloons filled with water. Bookmarks made out of felt and rick-rack and several other similar old-school crafts filled her table, each one more precious than the next - and each a buck apiece. Even puffy paint was represented. Who remembers puffy paint? Sigh. She had it in spades.

It took me a few minutes to choose but I decided upon a clucking chicken made out of a Solo cup with a felt beak and pom-pom rooster comb on top. The lady had affixed a string and a moist square of sponge onto the cup and she delighted us by making the cup cluck. I was all in. "Give me a hundred and fifty of them!" I wanted to shout. Instead, I left with one. He's now on display in the glass craft cabinet, beside the little googly eyed owl that my friend Rosy made for me from a toilet paper tube. They will be fast friends, no doubt and perhaps may find that they have relatives in common.

We bypassed the door prize registration booth as we reasoned that it was only a clever ruse to get our phone number and that deacons would call us every week to invite us to church. Not that it would be a bad thing, but having grown up Southern Baptist in a church where they guilt-called everyone like crazy on a Monday for missing a single Sunday, I don't want to go back there. I'm not handing out my phone number - even for the promise of winning a free hand-detailed car wash and wax. Even if that church is bringing Solo cup chickens and apple pie. Even if a large percentage of the ladies in the congregation smell nostalgically like lavender powder and Final Net hairspray.

As we were leaving the sale, Mister Kitsch noticed an old faux woodgrain answering machine on the edge of the yard sale section (so heavy that it took two hands to pick it up - "a bludgeoner" I'd call it) and once he saw that it had the cassette tapes still in it, he decided to buy it for two bucks just on the oft chance that there were still messages recorded on them.  That's the kind of thing that we live for -  snippets of anonymous folks' lives. We hit pay-dirt too. There were several messages on the machine.

The first was from a debt collection company (saaaaad) but the next several in a row were from a little old lady who sounded increasingly nervous that her calls were being left unanswered.  I told Mr. Kitsch that we should plug the machine in and play it every time that we come home so that we'll feel like our grandmothers are still around, just clamoring to talk to us. I can remember getting messages like those back during the good ole answering machine days. Those were the pre-cellphone decades so callers didn't expect a person to answer instantaneously.  I don't know if you all remember but back then, we left our phones at home when we left the house. I know! Crazy, right? I wish that I'd kept the old tapes with my grandparents' messages on them. Those would be soooo sweet to have.

I'll leave you with a video of Mr. Solo Cup Chicken. I know that you're probably totally riveted.


I hope that the rest of your weekend goes great! "The Walking Dead" starts back tonight! Eeeeee!

Deck's Glassware Got A Feature!

You may remember that I did a couple of posts a while back about our epic visit to Deck's Glassware in Chattanooga. Sometimes I still have fevered dreams about that place where I am sorting through stack after stack of dishes, searching for treasures.

Well, the local online newspaper Nooga.com decided to do a story on Deck's (yay!) and used my photos.

I'm so glad that Deck's and Chester are getting some attention. That gives me a smile a good mile wide. And gosh, I think I'd better get back there quick. That place is going to be swamped before long!

Click here to see the article. You can go here and here for my previous posts about Deck's. 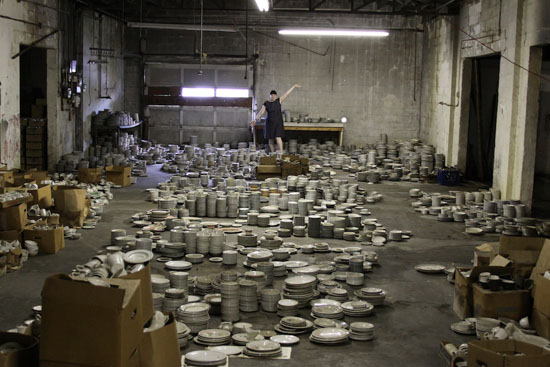 Have a great weekend y'all!