The Mister and I spent yesterday watching and digitizing Pam's films. I figured I'd dream about her last night and I surely did. Though in my dreams, she was an adult. It may have been because I told the Mister during the archiving that I hoped that Pam was watching along with us in the next life and smoothly guiding the films through the projector's creaky old unpredictable mechanisms.


There are thirteen films that show tiny portions of six years of her life. In total, a mere fifty minutes of her story. There were so many times that I wanted to shriek out with glee over certain scenes but had to clasp my hands over my mouth so that I wouldn't be recorded along with the audio. 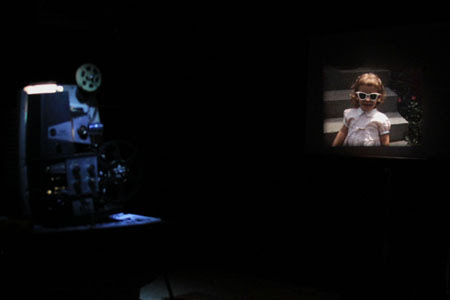 Since most of the scenes show her at family gatherings, I'm going to post one each Sunday. I remember Sundays as when my family always gathered together for food and laughter, watching the young kids play until dirty and limp while the relatives told the same stories over and over. Then we'd all pile into cars for home with our empty casserole dishes, exhausted but happy.

Without fail, the adults would yell out, "Y'all come go with us..." to those staying behind. Or an abbreviated "Y'all come! ". Then to complete the call-and-response, the answer would come back, "Nah...I guess we'd better stay here..". As a kid, I always wondered if anyone ever did jump in the car and come with - as I'd scoot sideways on the seat a little to make room for any possible stowaways. But as an adult, I realize that what made these visits special was not only the hellos.. but also the goodbyes.


Though I feel sad to have watched the last of Pam's films, I look forward to sharing them with you all. Y'all come...

This is going to be SO special, I cannot wait to see these films! Thanks for sharing them with us Eartha.

I love that you did this for her. I can't wait to see them.

Wow -- even just five second snatch like that is so evocative and haunting! Can't wait to see more.

I dreamed about Vincent Price last night. Nothing unusual. I love that you guys got busy and got the Pam Series digitized already. I'd still be sitting here a year from now thinking I ought to get that done sometime. Believe me, it's the sort of project I've thought about doing. I even have a projector, but no films. I think I'm afraid of accidentally running across snuff films or something equally awful. Meanwhile, I'm looking forward to seeing the Pam installments. This is awesome.