I think that it's a blast to learn about things that I never knew about. Especially things from my childhood. Even though I considered myself pretty up on all of the trends as a kid, some escaped my radar. Like Kooky Spooks.

One day, I was browsing my friend, Bryan's Flickr page and came across this photo: 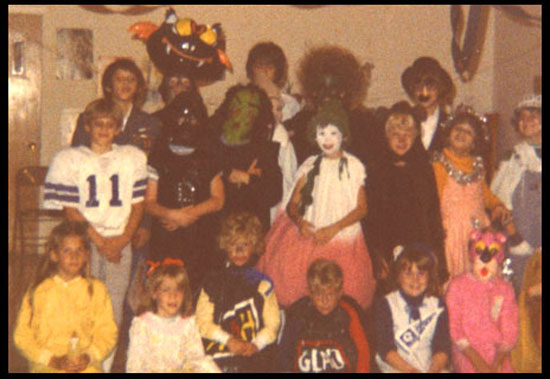 SO many costumes to look at and talk about in this photo but my eyes were instantly drawn to the kid in the back row with the inflatable costume on his head. 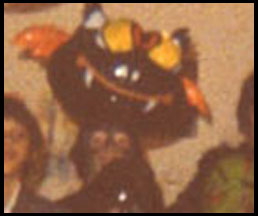 Ha! That kid was Bryan! And he was wearing Kooky Spooks - not only a great tongue-twister but also a pretty great costume idea.

He gave me the scoop on Kooky Spooks and I became so intrigued. Off I went to do some research. I learned that Kooky Spooks costumes were in stores from 1979 through 1981 and that they reappeared in 1985-1991 in limited release. How I missed them, I'll never know! I know that I would have begged my parents to get one. They were made by the same company, Spearhead Industries that brought us the Dudley Easter egg kits (both designed by the late Bob Williams). I bet you'll remember those!: 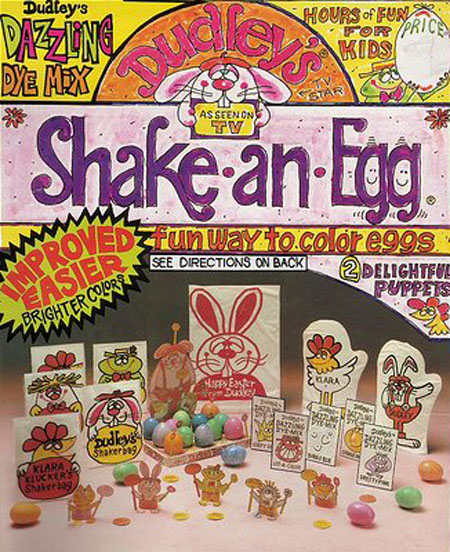 
Now back to Kooky Spooks! Some of the characters were: Ishy Bat, Scardy Cat, Wonder Witch, Woblin Goblin, Wunkin Punkin, Spacey Casey, Bone Head, and Howly Owl. They came with the poncho, an inflatable head portion, makeup and reflective tape.

Here is a shot of some of the whole costume packages owned by Andrew Williams:

The graphics on the packages are so cool and I can see how they would have appealed to kids. I found some other folks online who also had their very own Kooky Spooks experiences as children and they were nice enough to let me share with you all.

First up, this shot from Grayfamilia: 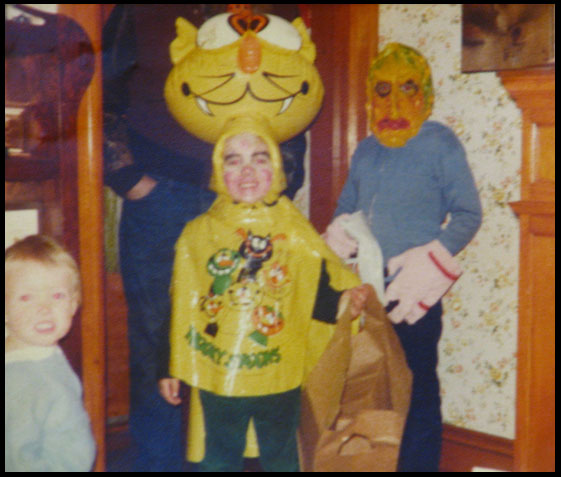 Here is one from Belle Dee at Doo Wacka Doodles: 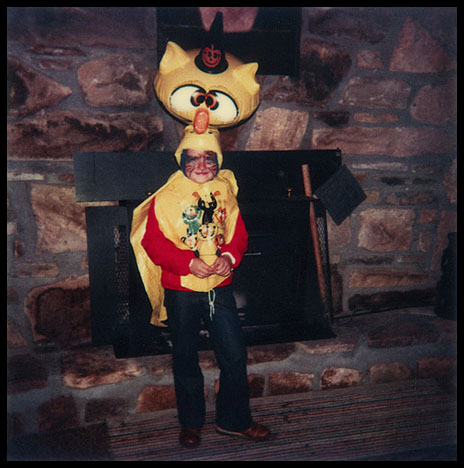 Here is one from Rotin: 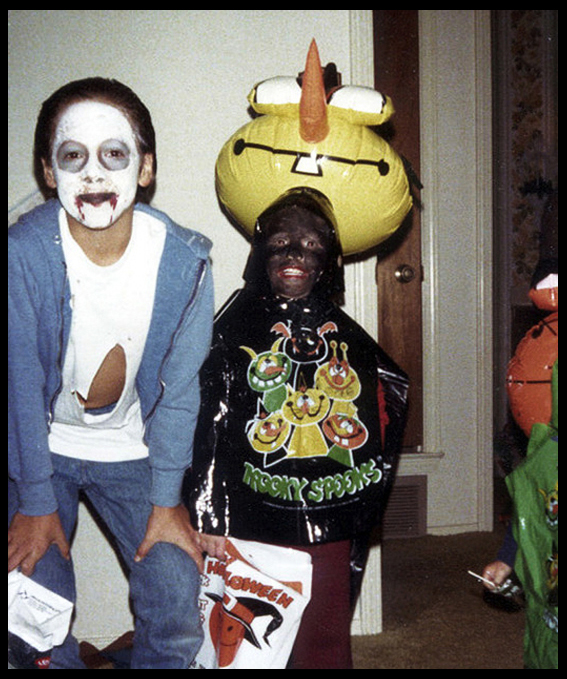 Here is one from C. Biscuit: 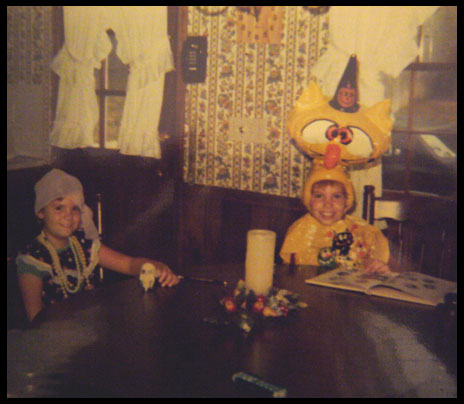 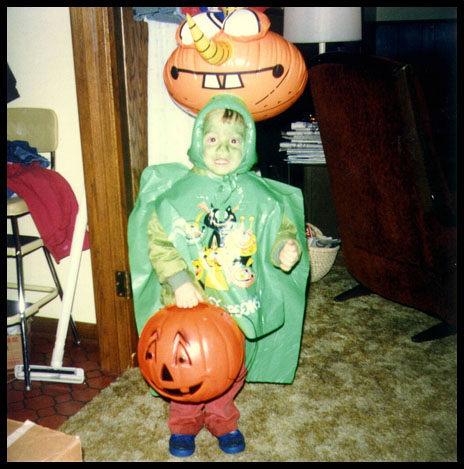 And here is one from nightowlghoul:

That's him as the little guy there, running from his cousin! I don't think that he was very appreciative of the Kooky Spooks yet.


Every single photo made me shriek with delight. I even watched an eBay auction for one but didn't pull the trigger to bid. Maybe next Halloween!

Do any of you guys and girls remember Kooky Spooks? I looked in vain to find a copy of the old commercial but didn't find it. I'd love to hear your memories - both Kooky Spooks and general Halloween related.

Thanks to everyone who let me share your pictures and memories. It was a lot of fun seeing them.

I wish all of you a great Halloween!

Until next time (don't forget your bicycle pumps if you're Kooky Spookin')
x's and o's,
Eartha
Posted by Eartha Kitsch at 1:53 PM

wow, if i came across a kookyspook, i'd have to get out of the house tonight and go trick or treatin'. and i feel much too lazy. but those are awesome. you have such a good eye for spotting the details.

Holy guacamole! I can't believe I've never seen these before -- especially because they were made in the prime of my Halloweening. Boy oh boy, I truly missed out!

Although my Halloweening ended in the mid seventies, I have never, ever heard of them. That would actually be a costume I would wear!

Ummmmm, I like so want that black cat costume - in the worst way!

wow,look at all those great Kooky Spook kids!! Awesome job!

It's 5;30 PM right now,the sun is setting,I got all the stuff lit up and turned on sensor mode. Bring it on! This is the night I get my annual glutes and calf workout from running to the door

Have a great night everyone!!!

Holy cow! The fact that I never knew about these as a kid sort of takes all the color out of my childhood memories... sniff. Kooky Spooks, I didn't even know ye!

I've never heard of these, but I grew up under a rock that also did not include YooHoo or scooter pies so it's really not surprising. -an

I totally remember these and had forgotten all about them! You are bringing my whole childhood back, one messed up '70s memory at a time!

Hope you had an inflatedly happy Halloween!!!!

I HAD ONE OF THESE!!! It was my favorite costume ever!! Oh I wish I still had it! Thanks for the memories!!

I do not remember "Kooky Spooks" but I think I was a teenager then, out of Trick or Trick mode. To be honest, they kinda a-scare me.

Oh man, I'd completely forgotten about these! I never had one, but I do remember some of my friends sporting them as we went trick-or-treating together. Hah!

How funny! I don't remember these although I would've been about the right age...we were "forced" to make our costumes each year- mom didn't believe in buying them, lol. I do remember easter eggs dye with dudley rabbit though! You know what childhood toy I also remember having a christmas version of? Shrinky Dinks! Those things you colored then baked in the oven to shrink em up. The 80's are odd.

Not only did my sister and I each have our own Kooky Spook costume the Halloween of 1979, but I still have mine. I have the bat, and it still inflates and holds its air.

Thank you SO much! I was trying to explain the bat head costume that I had to some friends and couldn't find a picture anywhere.

Wow, this brought back memories! I had the yellow KS costume and wore it in third or fourth grade, I think. I was the only kid to have one and I felt so speshal. :)

There is one right now on ebay for a heafty price. He claims its mint and unopenned though. Love the kooky spooks . Halloween madness!