Lisa and I went to an estate sale in our neck of the woods several weeks ago that promised to be chock-full of old Western and square dance items. The ad for the sale showed vintage dresses, crinolines,  string ties and all sorts of goodies that were going to be right up our alley. Of course, since we didn't get there before the doors opened, by the time that we did arrive an hour later, most everything had been sweeped clean. We enjoyed looking at the house and it wasn't a total wash as I found an album and Lisa picked up some pretty ties and a camera. We also saw this guy: 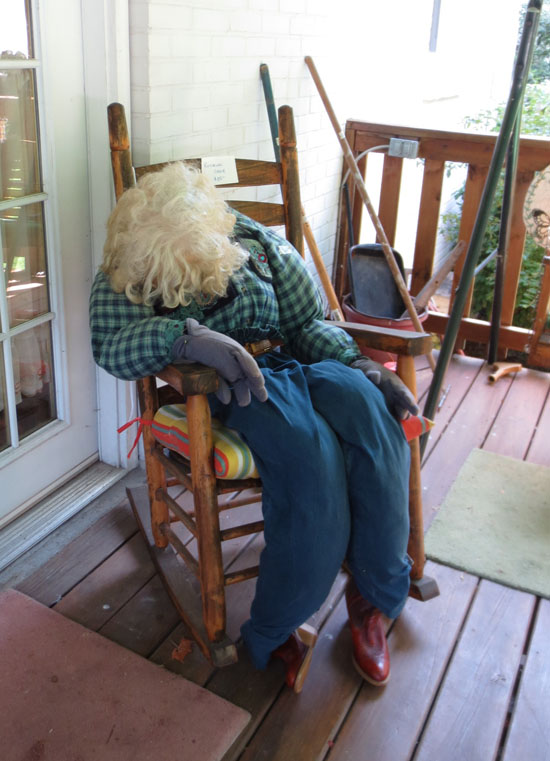 We didn't stop to offer him assistance so in retrospect I hope that he was fake and not under some kind of duress. I don't know about Lisa but I obviously was never a girl scout. I had my eyes on some unseen prize and was willing to forego the humanitarian mantra of "no man left behind".  Besides, I've learned from my true crime shows that once they're bloated like that, they've done gone home to be with Jesus. Once they bloat, that's all she wrote.

We were only there about ten minutes but before leaving, we went down to check out two small sheds on the property. In one shed, there seemed to be a lot of competition over a lawn mower and weed eater. Thankfully, that's not our bag. What is our bag? 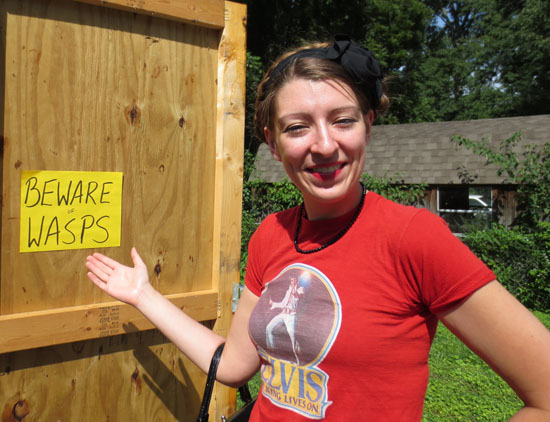 Now Lisa looks as safe as a swaddled lamb in this photo but right after I snapped it, a big honkin' wasp landed right on her forehead. Swarms of wasps continued to buzz around us as we investigated this shed with piles of unopened cardboard boxes and plastic Christmas garlands strewn inside.

We knew that at any second, we could be knocked down by the wasps and become the stuff of whispered tales of warning between estate sale goers for decades to come. Did that stop us? Heck to the no. Lisa was digging on some old curtains and I love anything hidden in a filthy cardboard box that hasn't seen the light of day for decades. This was that kind of shed. It had been handed over to the wasp gods years ago. And probably quite a few spider gods. No woman should tread there but yet...we soldiered on.

When Lisa suddenly pointed out an enormous box of magazines and I saw what was in there, well I almost stroked out like the guy in the rocking chair. I bring you... 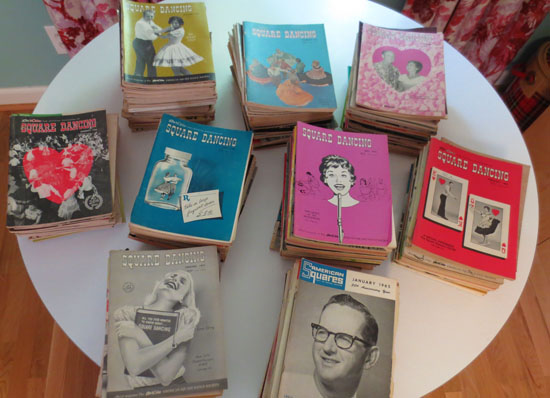 Over three hundred square dance magazines from the 60's and 70's!   I was a bit worried that I'd never be able to afford them as a single magazine of the same kind was marked fifty cents inside of the house. Even though I suck at math, the numbers that rang up in my head had this score going way up towards the $150 range. I was worried but after showing the cashier the boxes in the shed (where she didn't want to step foot into), I got an "oh god, just get those nasty things out of that nasty shed and don't make me ever think about them again" deal at $30 for the whole lot of them as well as the record that I'd found.  I wonder if this sounds like a lot? But I don't think so because square dancing memorabilia is one of my favorite things....like....ever.  And since they were fifty to sixty cents per issue back in the day, I figure I got them on "discount".

Thanks to Lisa who helped me drag that filthy weighty cardboard box full of magazines out of the shed, up the driveway and finally somehow into the trunk of her car (with wasps still trying to make a nest in her braid)  - and later for helping me get it out of the same trunk and onto my porch where it eventually fell apart, spilling out magazines like a musty piñata. I've only begun to barely look at them but here are some sneak peeks at the splendor: 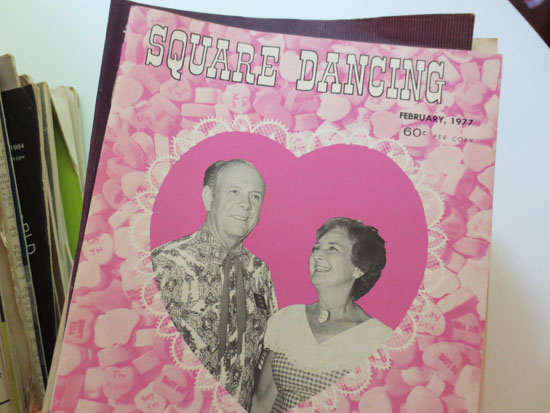 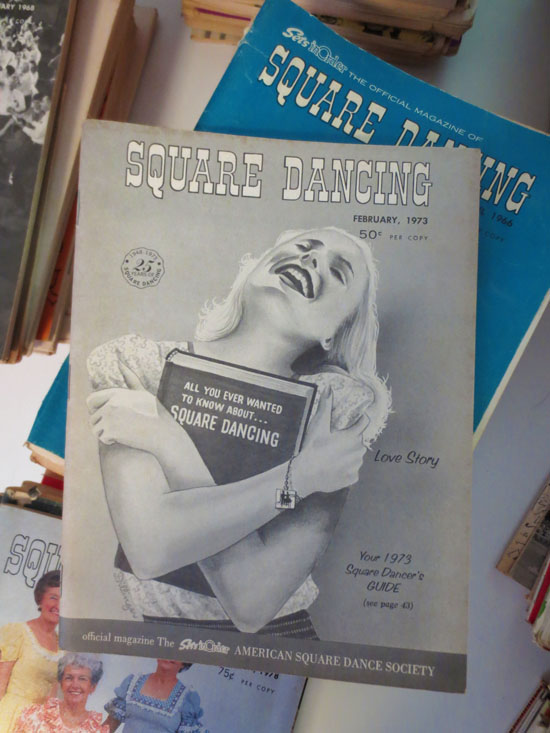 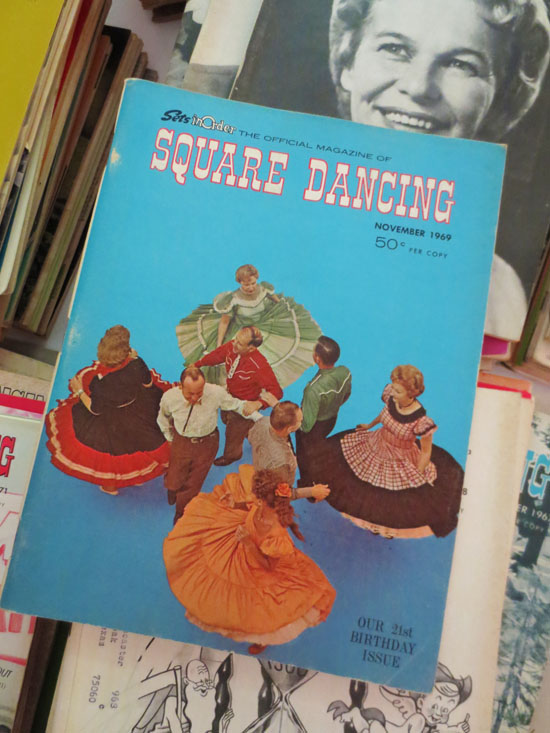 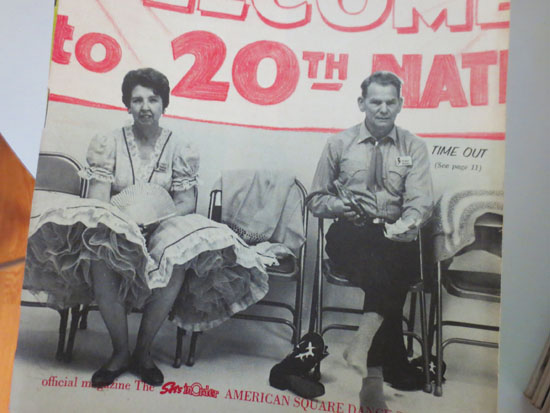 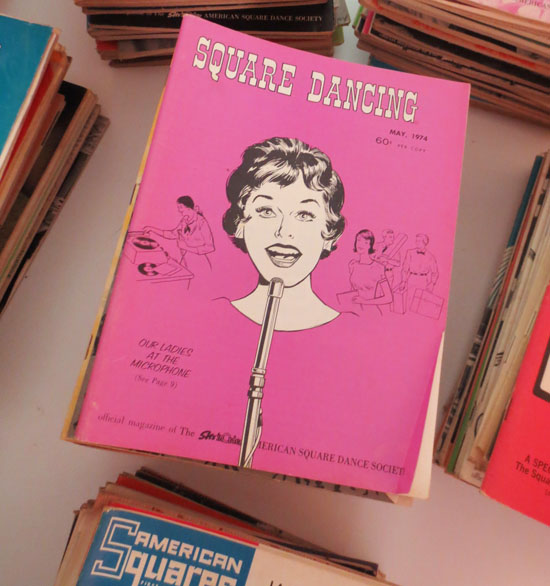 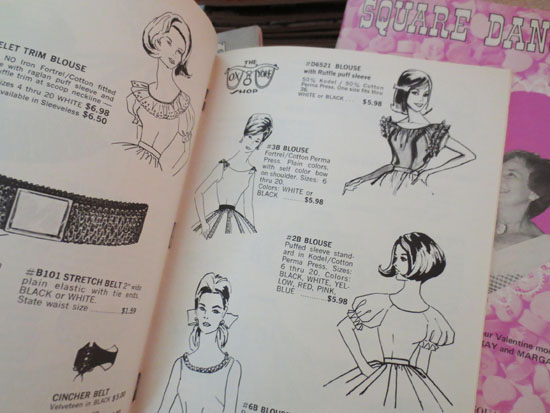 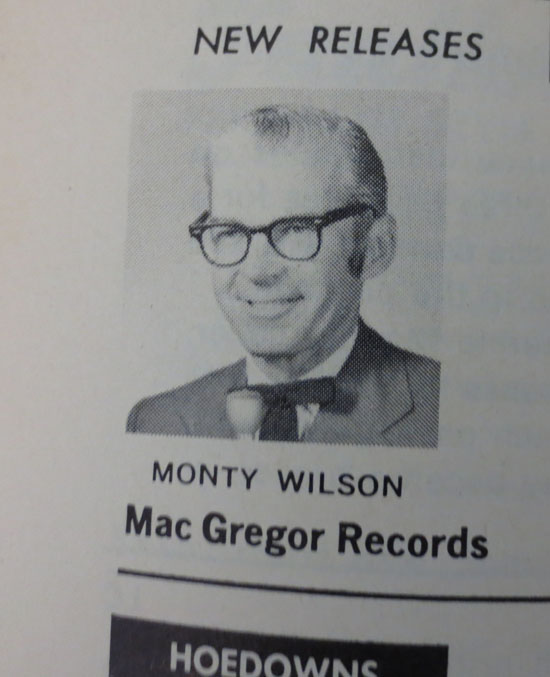 Each page, article and ad within these magazines delight me to no end. Even the letters to the editor are fascinating as you will see with this one about a poodle called "Flip" who has been named after a couple's favorite square dance caller: 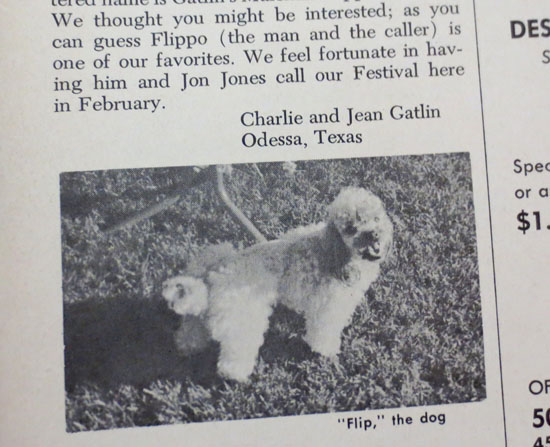 
I can't wait to have a big chunk of time to go through them all! On a related note, if you hear me talking about buying a "smaller house" and "downsizing" just slap me. I'm pretty sure that the Mister wishes that I'd collect something small like say, stamps.

Oooh! Congrats on your great find. I love how y'all just went on in that danger shed and grabbed that treasure! I have a real thing for vintage paper too so I totally get how awesome this haul is. I once found a dumpster full of 30's, 40's and 50's greeting cards. It was joy unbounded. I still relive that one.

Yowza missy! Those are some A.M.A.Z.I.N.G. finds! Being the investigator at estate sales usually ALWAYS pay off! Especially if you've got the stones to sneak past some sassy wasps! You should frame some of those beauties (after you are done reading them of course!) Those covers are to die for! LOVE LOVE LOVE! Congrats **I'm doing a little happy dance for you** :) xo's Ash

That lady on the cover of the 1973 magazine REALLY likes square dancing.

Oh, what FUN! Gosh, everybody looks so happy.

Also, y'all need a little wagon for further sale adventures. Just a mini one, which you could also probably find at an estate sale. Or one of those cart things people use for their groceries in places like NYC, but...I can't imagine lifting a heavy box of old magazines that has the potential to have also become a condo complex for hipster wasps into one of those things. No, you need a little red wagon!

I would frame that "All You Ever Wanted To Know About Square Dancing" issue and hang it on the wall in a heartbeat!

Eartha, we were so damn brave at that estate sale (as Celine Dion's "All Coming Back to Me" plays in a midi version in the background). I can't believe how amazing those square dancing magazines were/are!! We need to hit some more sales together soon, I am always willing to walk through wasps to dig in a weird outbuilding and it's rare to find a likeminded soul in that regard!! :)

Hell, as far as I'm concerned, you ain't estate sale shopping unless you are digging in every nook and cranny. A couple of liquidators laugh at me because my nose is in rafters and under stairwells.

Especially if you get into an old place with lots of accumulation. Things and places tend to get over looked.

Kind of funny how that box held out until it reached your porch.

Oh trust me,our hearts are totally connected right now,I fully know the joy that is old nasty boxes filled with old treasure that hasn't seen the light of day in years,AND the joy of old mags. I'm totally freaking out for you over this treasure

Wow, GREAT SCORE! Just happy you didn't upset the wasps too much or you might not have made it home with that treasure! Have you seen the video of the 21-foot-long wasps' nest found in an abandoned building in the canary islands? Great way to get major willies; apparently it's been there for YEARS..I guess the building inspectors are SLACK there!, and since I guess it doesn't get cold enough to kill the wasps seasonally they just kept on building...and building...

Can I come over and read these soon?!?!? They look amazing. I love Love love old magazines !! I'm so glad you and Lisa survived this possible murdeous wasp nest

I totally thought for a second that the lady in the blue dress was my Grandma! My Grand Parents are square dancing machines and have been for years.
What an awesome find! You'll have hours and hours of fun going through all those old magazines.

What a great find! I love old magazines, all kinds-in fact I have a box of Popular Mechanics (some from the 1920's!) resting in the back of my car-because I can't think of a place to put them where my cat won't start chewing on them. Space is an issue for me with the magazines, I would love to hear how other people store their vintage paper :)

very cool! i'm happy for you!

Those magazines are amazeballs....SO glad that you found and rescued them!

I just love that you collect interesting things that few others do - like me. I believe I am now called unique but before I was called "strange"!! :)I would have never thought of square dance as a collectible!

What an awesome find! I bet you could get lost in those for days. When you do, let us know what other gems you find between the crinolines and the string ties :-)

i've got to get back out to the sales! it has been so long! i LOVE those magazines! even the covers are worth the price. you need one of those old wooden book shelves that they have in schools where the books face forward so you can display them!

I'm finally getting to catch up on reading and loved this blog. A friend of mine as a kid, her parents danced every week and I would love to see them leave, her in a twirly fliffed out skirt and he would always help her in the car.

Thank you for stirring that old memory.