Some Girls Ask For Diamonds. Others Ask for Furs.

Mr. Kitsch texted me on the way home from work today and asked if I needed anything at the store.

I replied "After the day that I've had? Just a big pinata to beat the holy Hell out of!"

I never thought it would actually happen. 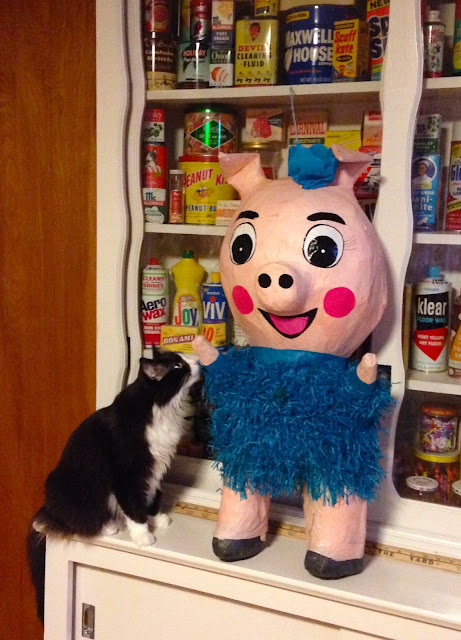 I'm pretty sure she's been hanging over the meat and fish counter at the market for months as she's quite aromatic.  Hopefully, once the kitties realize that she's not stuffed full of flounder and grouper everyone will make it out alive.


"I helped you get up three hours earlier than usual this morning and this is how you repay me? What is with this glass? We said we'd never let anything come between us!"

"I have a great cookbook called 'Cooking with Former Ferals'. If you'll just let me in, we can make my favorite recipe! Tuna scones! You'll love them! Come on, ma! Come on!" 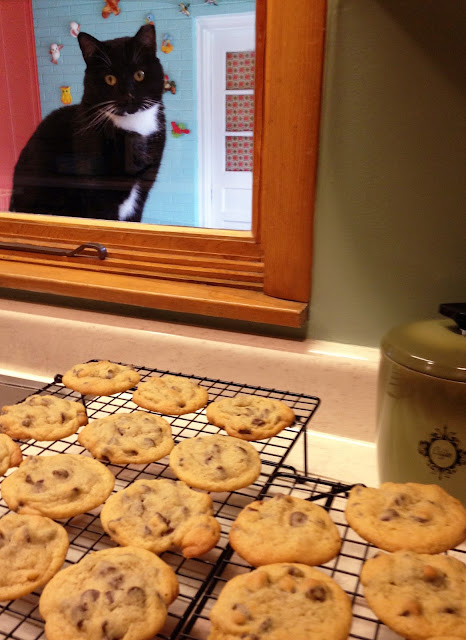 "Wait, is that salted butter? Heavy cream??! This ain't even fair!"

"Your cookie press technique is laughable. Let me get my paws on that thing!"

Yeah, he's talkative. Also, send up some prayers. I'm about to make a recipe where online reviewers lament about how stiff the dough is and how some of them ended up on back pills just from their attempts to use their piping bags.

Yay, Christmas baking! It's not truly festive until someone ends up in physical therapy.

How is your holiday prep coming? Are you in there like a maniac? Ignoring it completely? Do tell!

A Long Way Around And Then Back Again

So how does one start blogging again after... gulp...three years? Three years! I've asked myself that very question but I'm just going to jump on in!

Thank you to everyone who left messages and sent e-mails asking if I am still around. I loved hearing from you and knowing that you care. I did respond to the e-mails so I hope that the robots didn't gobble them up and that you actually got them.

The general consensus from messages seems to be that I either killed myself off in a freak accident (likely) or was kidnapped by a dog fighting cartel (there were times when this was also likely) or just fell clear off of the Earth (if you've seen me walk, then you know it's possible). I think there might also be a faction who thinks that Mr. Kitsch had me rubbed out like he's one of those murderous Dateline NBC husbands. Well, you can rest assured that he's still just in the planning stages and I'm as fine as can be. He hasn't even increased the life insurance on me yet.

All joking aside, the truth about my absence is that not terribly long after my last post, my dear Dad was diagnosed with lung cancer. We celebrated Christmas and then in January, he got the news. It was the most horrible thing ever and he fought it very, very hard. I never knew that my heart could hurt so badly. The doctors told us how long he likely had left but we had to pretend that we didn't know so that he wouldn't give up. I wouldn't wish that on my worst enemy.

The treatments were brutal and unfortunately, the cancer was too far along and now he's no longer with us. There is a big, gaping hole in the universe where he stood. I'm one of those people who has a hard time chirping around about fun things when the world is crashing down and well, didn't want to do blog posts about the most depressing situation on the planet so I just kind of disappeared during and after, immersing myself in lost and found pet work.

I'll never forget sitting next to my Dad and watching him pecking around on his computer while his oxygen machine whizzed and gasped. He pulled up my dormant blog and asked "I don't need to follow this still, right? You're not going to write anymore?" I choked back, "Nope" and he deleted. I knew that either way, he'd never read my blog posts again. And in that regard, I'd like to dedicate this post to him. Maybe they get internet access up in Heaven or maybe not - but either way, I bet he knows. He always hated when I quit things, especially if I loved them like I do this.

What I'm getting at is that it took me a while to feel like it was okay to show joy again and then Kapow. The election. Oh Em Jeez. Whaaaa haaaaappened? I really felt like a heel trying to act like everything was rosy after that calamity.  Wouldn't carefree blogging seem too Pollyanna in light of things? Maybe.  And then the devastating wildfires came and also made me wonder if there is room to talk about the happy spots. Then I got an email from a friend who reminded me that in times like these, we need distractions and happiness and frivolity - so I decided that she is right. It's time. For writing and crafting and trying to remember how to use Blogger. So y'all...here I am. I've missed you all like the moon would miss the stars. Do people still blog anymore? I don't even know. Break it to me gently if you kids these days use mind melding to share your thoughts.

Not everything has been bad since I was away. I did get to spend a lot of time with my Dad down in South Carolina - and with the rest of my family too. I also got to meet five new friends who knew me from reading Ranch Dressing. I know them all in real life now and feel very blessed to be able to include them in my circle of friends. We also now have rescue kitty number five and he's my soulmate. A real tuxie dreamboat of a cat who has toe markings that look like spats. Razzle! Dazzle!

And some crazy stuff happened! The TV show "Nashville" filmed in my house. I'll tell you all about that calamity-laced insanity soon. Right after I find my heart pills. And we had a photo shoot for Flea Market Style magazine. I'll also post about that but it's on newsstands right now if you want to take a peek before it's gone.  That was such a fun experience and two of our rescue kitties are now magazine models. The stardom has really gone to their heads and they're waiting on calls from agencies. Oh, aren't we all.

I also locked myself out of the house in the dead of Winter and got wrote up in the newspaper. See! You KNEW I was up to some kind of embarrassing weirdness, right? Well, you're never wrong. You'd also be right if you guessed that I was in my nightgown and had to talk to neighbors. I guess it's like my Grandmother always said: "If they ain't ever seen it, then they won't know what it is." Words to live by.

More Words To Live By: Ladies, if you're not the kind of mad scientist tinker who can fashion a bra out of flower pots and the random things that you have thrown around your yard, DO hide one in the mailbox in case you ever get locked out of the house. Your neighbors will never be able to un-see your breasts and lord knows, after a woman reaches a certain age, no amount of arm folding is going to conceal them.

It's good to see you all again. I'm dying to know what YOU have been up to for the past three years! Do tell and don't spare a smidge!