As you may have gathered, this post is all about birds. I'm mad for birds. Real birds. Fake birds. Classy birds. Tacky birds. I love them all!

On the road this weekend, we came across this guy! I've named him Pete. 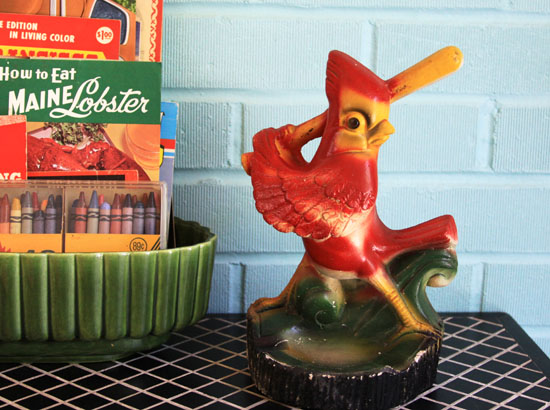 Isn't he wild? I'm guessing that he's a tie-in to the St. Louis Cardinals. I found this guy waaaaaay underneath a shelf in a junk shed, completely matted with old sticky cobwebs and covered in black dust. There is no telling how long he'd been under there! I got him for a song(bird) - three bucks!

And look! He's real live "art". Because the bottom says so! 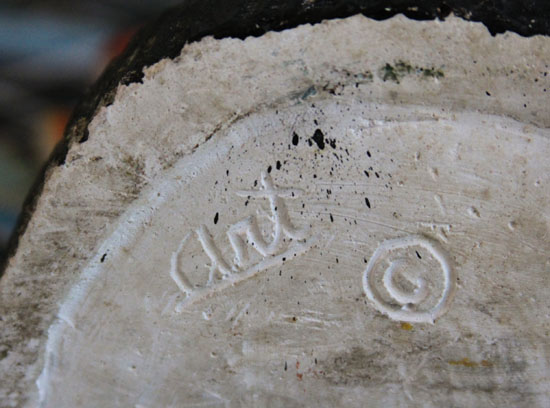 He's a real sweet chalk ware piece. I've been collecting chalk ware for quite some time now. He's only my third bird. One of my other two birds is an interesting piece. I found him in a junk shop in Kentucky (like I keep telling y'all - Kentucky is THE place for junking). I was immediately interested in him just for his looks. 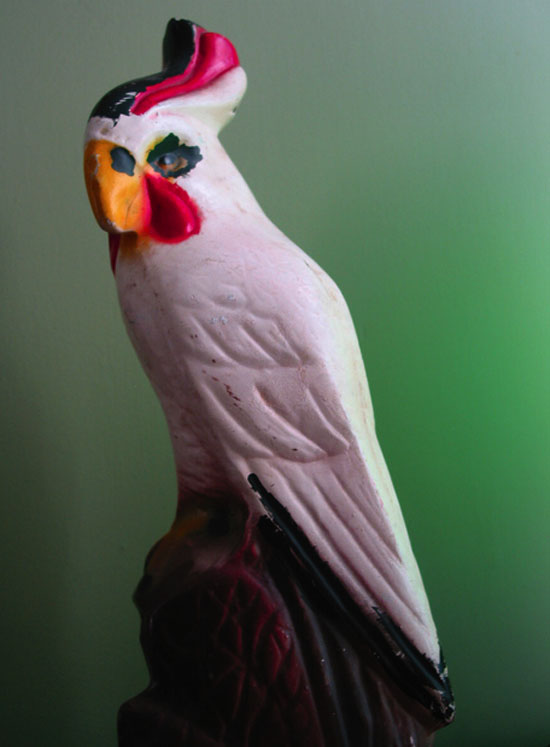 Then I tipped him over to see if there was a price on the bottom and was surprised to find a handwritten note scrawled way up inside of him - not on the bottom mind, you... but someone had taken the time and energy to scrawl these words on the inside of the bird: 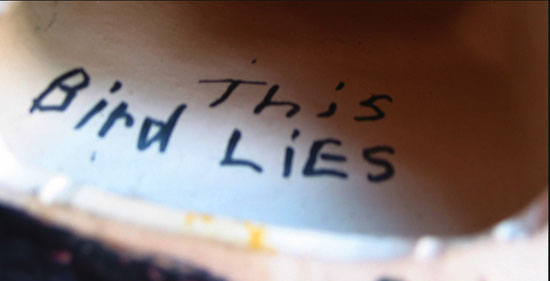 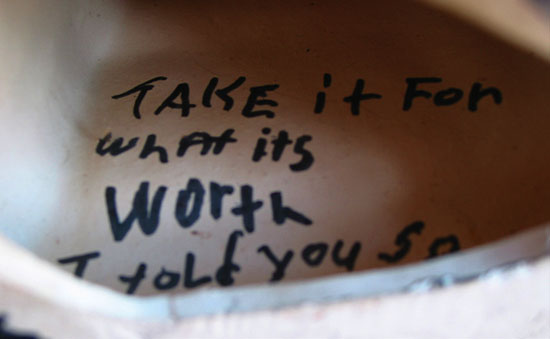 Pretty creepy, huh? I would give anything to know the story behind who wrote those words and why! I was intrigued and fascinated and of course, brought him home. Thankfully, we haven't had any trouble out of him for the most part. Well, there was one little incident at our old house where I caught Mr. Lying Bird in our basement lying to all of the other residents of Kitschville. 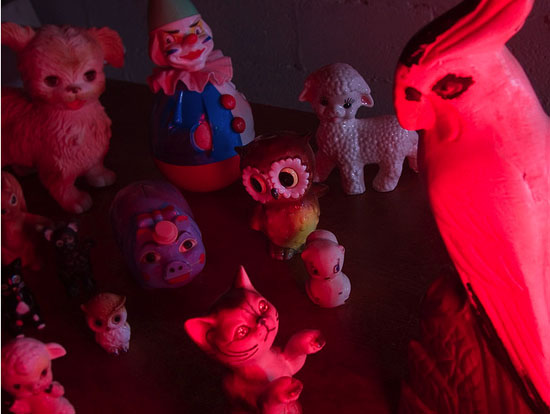 Look at how dazed they look! He told them that I was going to put them all out at a yard sale! Mean old lying bird! He spent quite some time in isolation after that. Actually, he still IS in isolation. He's been sentenced to living with the holiday decorations in the garage. 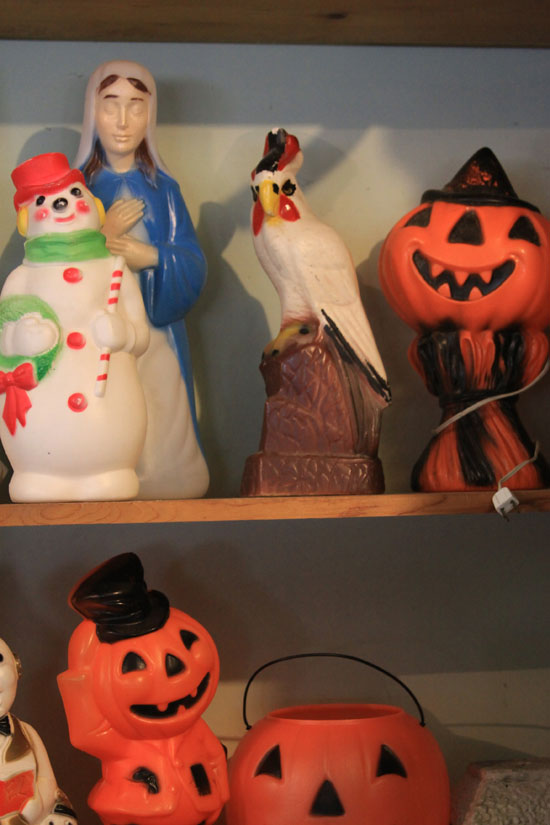 (Mary looks like she spends a lot of time meditating since he came around.)

I'm thinking now though that since we have defender Pete the Cardinal around, we might just let that bird come back into the house. I think that Pete can handle him! 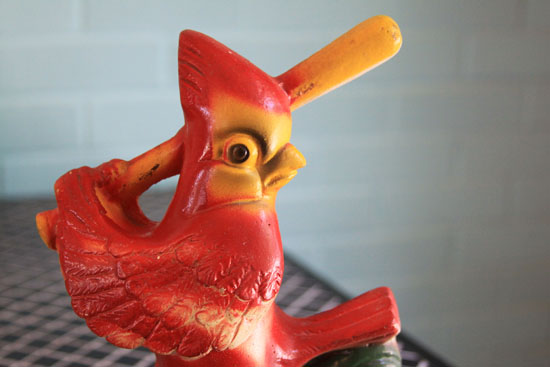 Until next time...I hope that all of your birds are good birds,
x's and o's,
Eartha
Posted by Eartha Kitsch at 2:15 PM

Oh God! I was rollin' girl! Toooo funny! 'This bird lies' oh that is the best!

Uh-oh, sentenced to live with the holiday decorations - maybe he will learn his lesson about lying now? Thankfully you found Pete - whew! He looks like a strapping young bird if I ever saw one! :)

I must confess, I have a slight chalkware addiction too! Shhhhh, don't tell Mike though. :D

Ya know, I have always been curious - How do you eat a Maine Lobster??? I think we need a post on that book alone!

Sounds like I need to git myself on over to those Kentucky parts for some junkin' girl!

Thanks, Sara! Can you believe that someone wrote that in the Lying Bird? It really creeps me out if I think about it.

Yes, I find that with him on the holiday shelf, he keeps waiting and waiting for a Lying Bird holiday and never gets to come inside. See how that works?

You do?! Chalk ware is the BEST! I have a very special Kentucky town that you must go to. Maybe on the way to your big trip to the WLYS next time!

That lobster brochure really tells you how to get it done. Believe you me. Whooo...

Jeez, people are weird, aren't they? "I told you so"...I wonder if the original owner got freaked out by this Chucky of a bird...let us know if you see visions in the night...

I agree! You just have to wonder if the person donated him or threw him out after honestly believing that the bird was leading him astray. I can see this faceless person, tossing and turning in fits of agony at night while in their mind, the bird lied over and over.

Oh, and yes...I'll definitely let you know if the same happens to me! :D
Could make for an interesting write-up!

I am sort of worried about what he will do if you ever let him back in with the general population. He might be angry after being banished to the garage.

lynxymama: Ha! You made me laugh! Thanks for your hee's! :)

raining rita: You are probably right. Would it be totally tacky to have a chalk ware bird in a locked bird cage?

Ooooohhhhh, you simply must divulge the name of this mysterious chalk ware laden Kentucky town!!!!

Sure thing, Miss Sara! It's Cadiz. I believe it's pronounced like "Kay-Deeze".

Oh my gosh! Cutest birdie I have ever seen; what a lucky find!

I LOVE spooky bird with the freaky paranoid former owner. That just makes my day. That's something I'd probably post during the Halloween Countdown!

Now, wait a minute. How do you know that Lying Bird wasn't lied ABOUT?

That is one sassy cardinal. He looks like he's spent some time hanging with Woody Woodpecker in a bar somewhere in Brooklyn. Hmmm... Maybe that is who wrote that...

Great collection. Kitschville looks like it may come alive at night, march up the basement stairs, and attack you.

Okay, that "this bird lies" note inside the bird gave me the heebeejeebees!

I love chalkware, too. Most of the pieces I find are scratched, cracked, or otherwise beaten up, but I don't care. I have a pair of chalkware ladies with their eyes scratched out hanging in the guest bedroom. (Take that, unwelcome house guests!)

hahahaha. That lying bird is creepy crazy and I have a feeling if you knew the story you might not keep the bird. Looks like the ramblings of the insane.

The lying to the Kitschville shot is a winner. The kitty looks like she's thrown her hands up in a big ole, "WHY?!" or maybe a "Meh". The lamb has fallen for it, hook line and sinker. And the pig is having NONE of it.