We here at the ranch are huge fans of Alfred Hitchcock and since today would have been his 111th birthday, I thought I'd post a video that I made a couple of Halloweens ago, recreating the shower scene from "Psycho" with Jack the mannequin boy.

We've done a couple of horror shoots but this was the only one where Jack took on tons of water. The poor kid oozed plaster for a week! I had parts of his body propped up on heating vents all over the house! 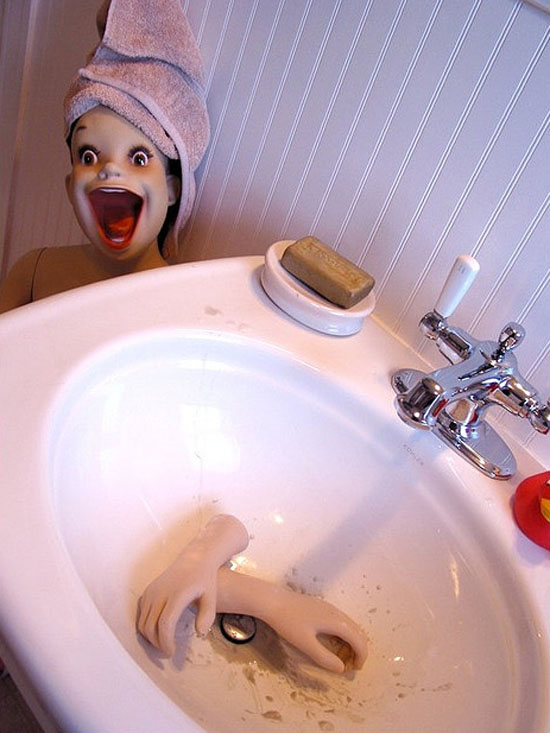 It was fun to dissect this scene from Psycho frame by frame to recreate it. It made me admire Mr. Hitchcock even more as I noticed subtle nuances that I'd never noticed before.

Side note: Black and white filming allowed us to substitute pancake syrup for blood. Boy, did the house smell good after a day of throwing pancake syrup into a steamy shower! 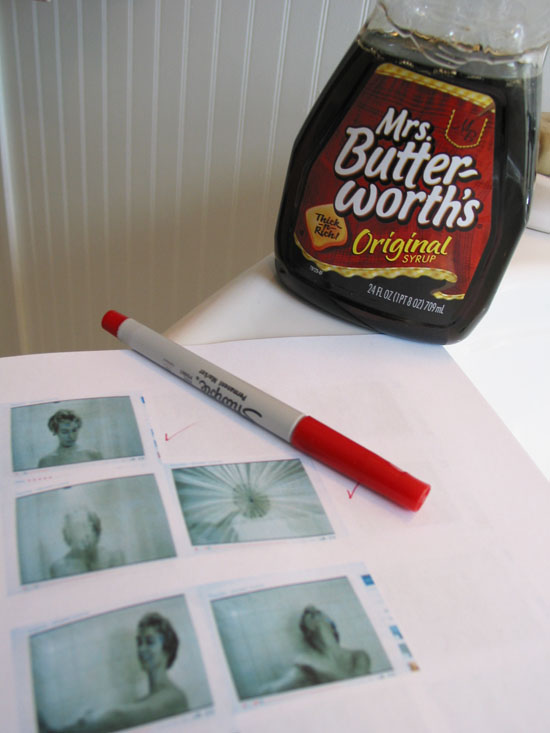 By the end, I was soaked, the kid was soaked, the bathroom was flooded and the whole joint smelled like a pancake house. Not to mention the sticky syrup in my hair and on the camera. All in all, a good day. It was one of those (many) days where I called Mr. Kitsch at work to warn him what he'd be coming home to. I know he loves those days!

What about you? What's your favorite Hitchcock movie or scene?

Oh! And with Halloween coming up, anyone have any good ideas for a scene from a movie that I should put Jack in this year? We've already done this one from "Psycho" and young Danny losing his Redrum! Redrum! marbles in "The Shining". I'd love to hear your ideas!

Until next time...be sure and lock the bathroom door,
x's and o's,
Eartha
Posted by Eartha Kitsch at 9:24 AM

I never asked - where did you find Jack?

My vote is for the scene from Night of the Living Dead when the little girl (who could be played by Jack) who has turned into a zombie, confronts her mama....who just doesn't want to believe that her child wants to have her for a snack!

I know that this in no way surprises you.

I LOVE this, got my husband to watch too, fantastic!

Barbara: Thanks! Many years ago, my brother sent me an eBay link saying something like, "Look at this crazy thing!" and I surprised him by saying that I'd die to own one ( a crazy, screaming mannequin boy). I didn't think much about it after that but on Christmas, I opened a present that was an old dusty steamer trunk with Jack inside in bits and pieces! My Mom and brother had gone in together and bought him for me! Ha! So, through the years, he's done lots of photo shoots - and is the stand-in for the grandchild that the Mister and I have never given my parents. :)

Sherrie: Oh my god! Yes! I always scream at the Mom as she drops that gardening trowel and lets her daughter devour her! I'll have to find someone with an old dusty basement. It CAN be done. That's a contender, let me tell you! Jack in a wig maybe...new frontier for him.

Straight Talking Mama!: Thanks so much! And I love that you got your husband to watch. Hopefully he understands a girl, her mannequin boy and a butcher knife mean well. :)

OR, you could film "on location" in a cemetery and do the beginning scene of NOtLD. "Their coming to get you Eartha!" He could pop out from behind cemetery stones. Wait, I think I need to be there for that one!

I think that you should be here too!

You know, we have a huge old cemetery about a mile from our house. I'd be so scared that we'd get arrested. Hmm...I wonder...

OMG...you may need to worry about Jack...I think I found his sisters head here:
http://cgi.ebay.com/ws/eBayISAPI.dll?ViewItem&item=120556221645&ssPageName=STRK:MEWAX:IT

Be afraid. Be very afraid.

And look at this lady!

I'll bet there are all sorts of sick fantasies that can be fulfilled by ebay...

Oh no - body parts strewn around the house!!! :) Sounds like a horror movie in itself.

I love how you are SO organized and have the scenes checked off.

Ummmmm, I don't know if I will be able to take my shower today. Better go lock that door right now.

And smelling like a pancake house, well how can you go wrong there! Sign me up girl. :D

What about doing the Exorcist??? You could put him in the bed and make his head spin, spin, spin!

Such a shame, all that clean grout covered in syrup... ~An

I never realized what lush eyelashes Jack has! And I second Sherri's idea :)

Barbara: Don't you know it. At first I thought, "It's hard enough getting clothes on Jack. How would one even be able to dress her??" and then I realized, "Oh...she's one of those "naked" mannequins!"

Sara: Thanks! Oh yes, I find that you have to be organized in situations such as these. Water, syrup, mannequin, neighbors outside of the window...you've got to get in and get out! :) I'd LOVE to do the Exorcist. The only thing that I can't figure out is how to make it look like Jack's head is spinning while his torso stays facing forward. I need a spare head! STAT!
My brother has a Jack's brother mannequin but I bet he won't let me saw his head off. Selfish brother.

An: I had my cleaning lady take care of it. Okay, I've just always wanted to say that. It's SO not true.

K0dama: Aren't they gorgeous?? I love that idea too!

What if you started dressing Jack in women's clothes? You could do Tootsie!

Ha! I think I might have some explaining to do to my Mom about how I turned her fake grandson in to Tootsie!

Eartha - I have been on eBay for the past few hours looking for our very own "Jack".

I think I have found Jack's long lost sister, "Lupita"!!!

Oh my gosh, JohnnyBerry! Look at her! She reminds me of Madame!

Y'all decide you want a Jack relative, I have a link somewhere to a company.

My favorite Hitchcock film for sure is The Birds. One of these days I'm going to dress as Tippi Hedren's character for Halloween. Meanwhile, I covet the Tippi Hedren Barbie:
http://guelphmercury.blogs.com/.a/6a00d8341cf1f953ef010536a3c47f970c-800wi

Ooh! That's a great one! - and it's SO unnerving. That would be a great Halloween idea. I've seen someone do it once with birds wired all around them like they were pecking her. It was pretty fabulous. That Barbie! Okay, that might be the best Barbie EVER.

Hi Eartha! I got your msg on flickr (MrsErinD) and just found your new blog, yay!
Thanks, I am hanging in there, they just found out I have narcolepsy (great,lol)so been busy with doctors etc plus the sciatica and stuff.
But the fun news is I have redecorated! Made things more 40s/50s, I found some Zomba barkcloth on ebay (gorgeous!) and
cool lamps, and a 1949 TV, a 1942 stand radio and 1947 stereo console!! It looks so different, and I hope to have pics real soon on flickr and may even restart my blog again (haven't blogged in 2 yrs since I started redecorating)
So I will let you know when I have the pics up.

I am so happy to see your blog! That Psycho with Jack is awesome, haha!!!
Hope you are doing well! :O)

Whoah! Just as freaky as the original! LOL!!

Don't know if I could pick a favorite scene in a Hitchcock film. They're all so different, and masterpieces in their own right.

For instance.. the bookstore scene in Vertigo; Halfway through the scene you suddenly feel cold and uneasy. Lighting, camera, and music all does that to you. Hitchcock was a genius. You feel exactly the way he WANTED you to feel. He was a master indeed!

Favorite Hitchcock movie is easier. It's got to be Rear Window! The acting, as well as the plot were superb!

And Jack is really an excellent actor! Such a lot of range! I think I see and oscar nomination in his future!

Huge Hitchcock fan-- I share a birthday with him! What a neat video, it's spot on staging-wise, but it's still somehow funny. The expression on that little mannequin's face! Loved it.

This is BRILLIANT, and so is your site. I love every piece of it. Just linked to it from my blog. I adore it.
Keep up the great blogging.

And I'm totally doing this to celebrate his 112th!