Since I was a kid in the seventies, I've been fascinated with crafts made out of things like beans and macaroni. Oh yes, it was a very seventies thing to do! I can remember watching my brother come out of art class with a huge American Eagle made out of macaroni. The macaroni was painted gold and mounted to a large board. It was freakin' amazing! I also remember how jealous I felt. I know, it sounds crazy but hello, this was the time when the Bicentennial was all the rage - and who can beat things made out of macaroni? Two great things that go great together.

So, you can imagine my joy (or maybe you can't..but humor me) when I was perusing Etsy (as one does) and I came across a great shop called DollFood that has tons of cool stuff - including an amazing vintage burlap banner depicting all sorts of nature, animals and household items made out of pasta, beans and spices. Burlap craft was another staple of the seventies. Once again, two great things that go great together! (Are you still humoring me?) I'm pretty sure that I squealed with glee. And then click. click. click. bought it! When it arrived, I was so amazed at how detailed it was and how many clever uses of different food staples were used. Three feet of crafty awesomeness complete with a little bell so that I can tell if someone is trying to steal it.

Here are some highlights. : 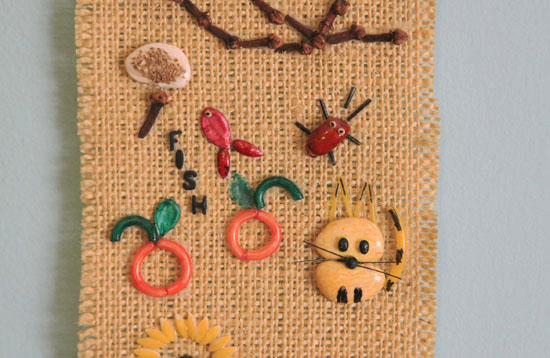 You know that bean cat had me at "hello" and look at the tiny little bug and fish!
Don't worry. Bean cat won't eat them. He's got oranges made out macaroni. 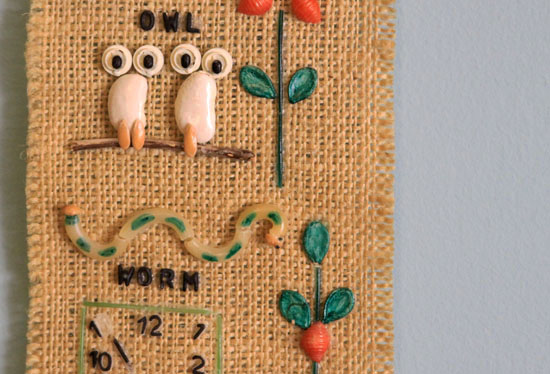 Look at those owls! And that worm! He looks like a snake to me but hey, alphabet pasta
doesn't lie. Speaking of which, I absolutely love the use of alphabet pasta.

The top of the banner suggests conversation - about this groovy banner, no doubt!
I mean, bean flowers, people...bean flowers! 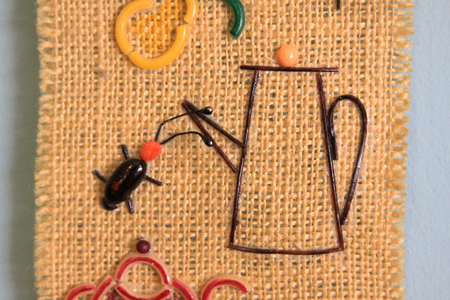 That little bug is moving in for a caffeine fix! Or he could be just trying
to get a closer look at that coffee pot made out of spaghetti. "Look at that perfectly crafted handle" he says to himself. Yes, even bugs appreciate fine art. 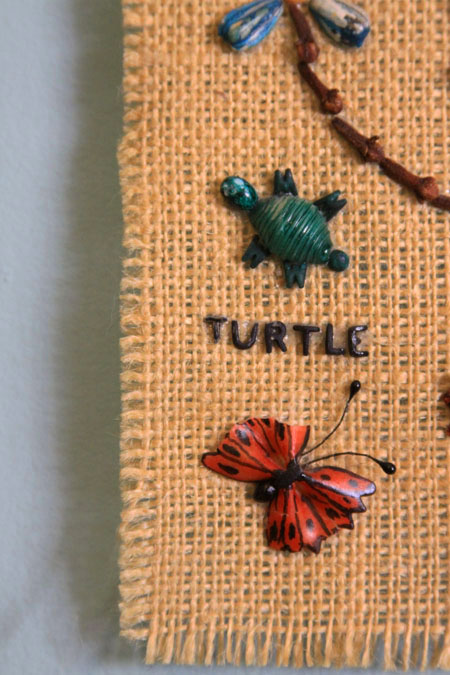 These flowers are made of cloves and sunflower seeds.

That bee is darling down to every last detail - and that caterpillar made out of rotini...
I'd have to say that little guy is definitely my favorite. Look at his little eyes!
He's knows that he's going to be a bow tie pasta butterfly one day!

Pretty wild, huh? One has to wonder if the person who made this already had all of the supplies on hand or did they just completely clean out the pasta and bean aisle at the supermarket with visions of the masterpiece to come? Or maybe they were in a craft class where a whole table of folks sat around and made these. That's it! Quick! Someone get me a time machine...I'm going back and I'm carrying mass amounts of macaroni!

Speaking of fun with food, I've been wanting to share the work of one of my good friends for a while now. I met Miss Retro Modern on Flickr years ago and have always been impressed with her very own style of crafting. I'm talking peanuts with googly eyes, people. In beautiful scenes and in sweet little movies. Here is a great movie that she made that makes me both giggle and cheer. Keep your eyes peeled for the pasta guest stars! :


And here is her latest creation. She did this a day before the royal wedding in prediction of what the bride and groom might look like: 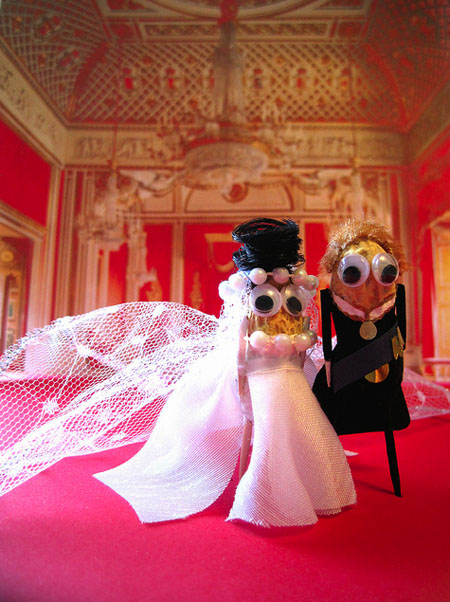 I think that she came pretty close. Just look at the happiness in their eyes!

Do yourself a favor and check out Miss Retro Modern's peanut people set and photostream on Flickr for more amazing photos and videos.

It's going to be hard to see these foodstuffs as mere staples in the pantry ever again, isn't it?

That is quite a find! All you need now is a macrame(spelling?) plant hanger to go with it. I like the coffee pot and oranges myself. Will be thinking of you next time I'm in the pasta isle.

I think I love the owls and the kitty best! I hope you've chosen a place of honour for the pasta burlap banner!

Eartha, I want to come and play at your house! I'll get my mum to speak to your mum and sort it out. I'm always so pleased to see a post from you.

I love the butterfly, the flowers are sweet, but I think it was the caffeine crazed cockroach which really sealed the deal for me. (also, I already own a gold painted pasta angel which I hang on my Christmas tree, so I've already dipped a toe in the awesome lake of food based craft). That macaroni/neon paint bracelet my 3 year old made for me suddenly isn't cutting it. I'm showing him these pictures tomorrow.

The dedication to spelling things out with alphabet noodles is just stunning!

That pasta banner may indeed be a winner... but good heavens girl! A SINGING PEANUT! Quite a delightful little showman that shelled wonder. LOVED IT! Absolutely NUTS!

A rotini caterpillar, come on! If ever a piece of pasta was invented for any better purpose than to be styled into a caterpillar...And then the concept of a wagon made from pasta being utilized to supply the creator with more pasta for such creation, well, that's just blowing my mind. Brava, my dear Ms. Kitsch.

Alphabet pasta and burlap crafts-did it! My folks still have a burlap ocean scene I made in grade school,when i find it I'll shoot it!

Wowee, that is the holy grail of foodstuff art! I bet it was made by an industrious (bored?) house wife and proudly displayed in the home. I really like it. The peanuts are hilarious!

Oh gosh, I just LOVE this crafted banner! What an awesome thing to find. I think the little tiny fish is my favorite. :)

And great job on all the peanut people MRM!

oh i just love this! the bean cat! i found an owl made out of sun flower seeds at southern thrift (im in nashville too) and it's one of my favorite finds ever! even if no one i know thinks it is cute.

Oh my gosh! I'd love to see that owl! I don't know what we'd do without Southern Thrift. I don't think they throw ANYTHING away. Which totally, totally rocks. :)