I was recently given my late Grandmother's coffee pot. 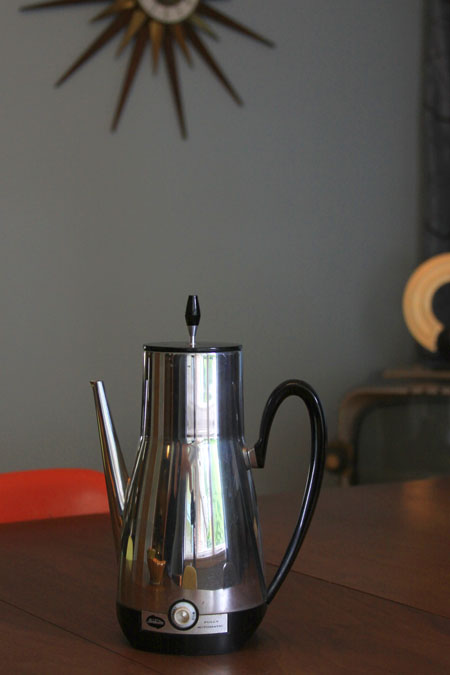 Now, I don't drink or even make coffee but I really love having my grandmother's pot.
Especially after seeing what a big deal it was for women to be able to make coffee back
in the day. Here. See what I mean:


Like the way that Harvey brought up the girls at the office? He's pretty much letting
her know that he can replace her with any number of girls from the steno pool.

Um, did anyone notice how he shook his finger in her face?
I was hoping that Papa Eddie was one of her Dad's mafia friends.

Belittling is the anniversary gift that never has to be returned!

Harold better be careful with that refusing to talk stuff. It only
makes it easier for Jean to picture him with duct tape over his mouth.

If she knows what's good for her, she'll take those puppies
and file some paperwork.

"You make me feel very unwifely!"

Yay! Margie gets to keep her job as wife!

What's Janie doing out late like that, roving the streets?
Shouldn't she be at home? In her place?

Wow, Folgers was a girl's best friend, huh? I'm both intrigued and annoyed by Folgers' ad campaign. There were so many of these ads that I couldn't even use them all. And it wasn't
just Folgers. Anyone remember that classic ad where the wife says "Jim never has a second
cup of coffee at home!"? That wasn't even Folgers. That was Yuban coffee, who also had an
ad campaign with several commercials just like these. One can imagine that with these ads running constantly for decades, women might have been practically brainwashed into believing
that they were something less of a woman if they couldn't make good coffee!

It's these kinds of things that allow me to temper my love for the vintage lifestyle with a little bit of reality. Sometimes, when people learn that I love vintage things and ideas so much, they say things like, "But things were so backwards then!" or "I wouldn't want to be a woman back in those days!" I think though that it's about knowing which parts to be nostalgic about and which parts to learn from, you know?

And I think that this whole coffee thing is a lesson in looking with a well-trained eye at what modern advertisers work so hard to make us think that we have to do or be like. I think that it's just as okay to giggle at the standards that they're trying to push on us now as it is to giggle in retrospect at what they were trying to convince us of then.

Until next time (ring around the collar is NOT a sin),
x's and o's,
Eartha
Posted by Eartha Kitsch at 3:54 PM

I want that percolator. I want it now.

That is probably one of the coolest I've seen. You must start drinking coffee.

Thanks! I've just never had the taste for the stuff. I'm a sweet tea kind of girl instead.

Arg, after watching all of them, you have to wonder. If she IS making the coffee wrong, why doesn't anyone show her? You could have the best coffee in the universe, but if you add six scoops and two cups of water, you're still going to have crap coffee!

It's true! I think that it's because men don't know how to make coffee. And well, that store clerk and the lady who always carries a can of coffee in her purse only wanted the women to be consumers. It was a rock and a hard place, if you ask me. They didn't even have the internet to look up how to make coffee back then!

harvey is such a dick!

I totally agree that watching these vintage ads and reading vintage magazines helps you to see more clearly the dumb standards that we're meant to live up to today. Back then it was your crappy coffee that made you less of a woman, now you're less of a woman if you aren't Swiffering your 100 square foot kitchen while wearing skinny jeans.

Your grandmother's coffee pot is a real beauty! I love that handle!

Papa Eddie is such a disappointment! The fact that he felt he had to demonstrate what a mountain was with hand signs ... bummer.

I just wanted to pipe in and say that when people comment to me about the whole "things were backwards then!" and/or "women had such a horrible time!" I usually counter that ascribing what happened in media representations of marriage to real marriages of the time isn't the clearest way to understand the gender dynamics of the time (although, yes, I know tradition reigned). And that by lumping all women in the mid-century together as struggling within some vast yoke of unhappiness, we deny them their individuality and the alternate ways they might've asserted their power.

Gosh, the college professor in me never goes off duty! Sorry to ruin your charming post!

Whoah! These aren't very subtle! Coffee isn't that damn hard to make! This is good ole fashioned fear mongering. Picking on the insecurities of the inexperienced young bride's of America (or more aptly creating new insecurities) just to hock coffee! It is nice to be in the modern times and to be able to choose what we want to enjoy about the past decades. No wonder women started burning their bras! Other than that, your percolator is a beaut! My best friend has one similar and it does make some damn good coffee--take that Folgers Crystals!

I'd be SO screwed if I was a wife back then -- I can't make a cup of coffee to save my life!

Miss RM: Ha! I love that Swiffer part! And thanks!

Charm and Poise: Amen, mama! You didn't ruin a thing with your Professor-ing. I like it!

Amber Von Felts: It really is, isn't it? And you're dead-on about the fear mongering. Folgers should still be ashamed!

Sara: I've never tried! I'm thinking at this age, I might never have to. Thanks!

My God,these ads are like old 40's movies where the tough guys smacked the crap outta dames,I kept thinking one of these poor houswives was gonna get a beat down!

Not sure how on earth you got Mister Kitsch without coffee, Eartha!

I know it! They're one step away from "teaching that broad a lesson"! I got the Mister with my amazing dowry of cats and kitsch, of course!

this is the greatest post EVER!!! i am DYING!

Thanks lynxymama! I hope that you've got your coffee making skills in order! :)

Great post! I had no idea so many marriages were on the brink of bad-coffee-induced destruction!

Although I realize, I wouldn't know how to make coffee in that world either. I only know how to use my electric automatic, push button machine. How does one of those old percolators even work?

I feel like, in modern times, one product whose advertising rivals this for stupidity is yogurt.

Yogurt! I haven't thought about that but you are SO right. I even had yogurt this morning. One of those that has commercials nonstop! I wouldn't know how to make coffee either. Something about grounds and water...that's all that you'll get from me. :)

Hi, I'm MiscVideos78rpm. I uploaded 3 out of the 6 videos you embedded. Thanks for the link. It is greatly appreciated. These old coffee ads are very enjoyable and outdated! Check out my YouTube channel for more fun retro stuff at http://www.youtube.com/user/MiscVideos78rpm ! Thanks!

Thanks so much for putting them up for all to see! They're something else! :)