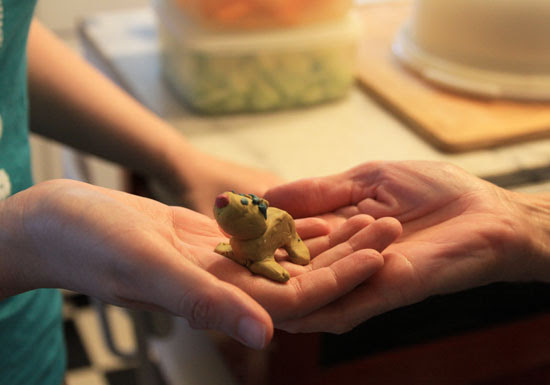 Until next time (did you know that thirty year old Play-Doh still smells the same as day old Play-Doh?)..
x's and o's,
Eartha
Posted by Eartha Kitsch at 8:25 PM

My mom saved nothing.

When dad died, I found my first place award for the science fair in his papers. At least HE cared...

I covet your reindeer.

Aww! Yes, but he DID care and that's a great thing. I sucked at science fair if it makes you feel any better. :)

Cute but also very cutting-edge, right? I want to think that I was mostly rebel.

Hee! Thanks for believing in me, Monica! :)

I just love how instead of thinking there was no Santa, you thought your Mom stole it. I guess that is pretty cutting edge!

Ha! I know, I was pretty distrusting of authority figures even at that young age. I wasn't going to go doubtin' Santa though. You doubt Santa and he stops coming.

Thanks so much! I now own that reindeer and hope that I'll have someone to pass him down to and that he won't end up in an estate sale with people giggling at him. :)

Wait, are you telling me there REALLY is no Santa?????

PS - I LOVE this story girl, and the reindeer! And, your Mom is an angel from heaven isn't she?

That is about the cutest story I've heard, awwwwww!

I have to say us kids in the UK had the upper hand, no cookies & milk for Santa here, Mince pie (which I've learned is a mincemeat tart in the US) and a glass of beer or whisky!

Mind you maybe by the time he reached the US he needed the milk to sober up ;o)

So sweet! Better than a Christmas miracle! And how cool that it still has that great smell...I would never have guessed.

Sara: No..No! There IS a Santa. Don't you worry. Just ask that elf of his that you live with. The one with the mad fix-it-up skills!

Straight Talking Mama: Thanks! Really? Mince pie and beer or whiskey? I can see Santa liking your side of things a lot better than ours!

Sherrie: Thanks, you! I know...it still does though. Flashback smell.

Like Celine Dion said to Kathy Griffin : "you and your stories!"

I LOVE your stories!! I was on the edge with that one waiting to see what conclusion your young brain was gonna come up with. It turned out perfect :)

And I adore the reunion of old childhood artifacts...sigh

And thank you for your sweet words. I know that you of all people know how great it is to be able to be in touch with childhood even as an adult. I think it's a real gift if we have good memories of childhood as many people don't.

I love the "MOM...! You STOLE from SANTA? How could you?" reasoning. Oh my gosh. Plus, the reindeer is precious. AND the suspense pacing of this story was tops. Five christmas stars awarded!

Awe wonderful story and it's true you are a great artist!
Thanks so much for sharing your childhood with us. Oh yeah, and Kathy Griffin is hilarious and almost as good a story teller as you.
Love,
Jenny AKA Willowfan

This story makes me love you even more! - if that is possible.

I love your style, Eartha. I look forward to more of your posts.

every time i think you can't write anything better, you pull something like this out of your hat. i laughed until i cried! when did you tell opal? (or did you- snoopy girl!)