The Santa Claus SmackDown of 1977 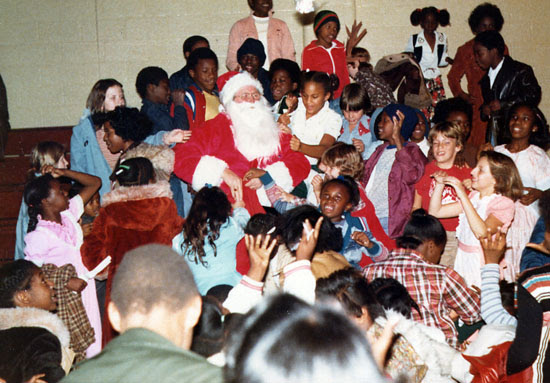 This photo is the stuff of legend in my family. It shows my late Great Uncle Buddy being mobbed for candy canes in the Christmas of 1977. It happened at my elementary school after his daughter-in-law talked him into dressing up as Santa Claus and coming in to spread some additional cheer at the conclusion of our school Christmas production of "The Night Before Christmas" as the actors and actresses sang the final song.

What nobody predicted was that the children in the gymnasium would react as if they had been long suffering through a candy famine, flocking to Uncle Buddy and mobbing him as if they were about to draw their last sugar-deprived breaths. As he came through the back swinging gym doors and surprised the crowd with a roaring "Ho! Ho! Ho!", he was met with a sea of clamoring children who in mass exodus jolted from their seats next to their parents and were now scurrying over each other for whatever loot was to be found in Uncle Buddy Santa's velvet bag. As he tried to maneuver away from them, they chased him from the gym floor to the top of the bleachers (and I'm talking waaaaay high up at the top - it's a wonder that nobody was killed) and trampled him for treats. He actually had to fight kids off.  For candy canes! My brother says that all that he can remember is the "roar" of children as they engulfed him and my Mom says that the kids were like a "swarm" - both great words to describe the melee.


Look at this close-up. See how some of the kids have actually snatched ahold of him? 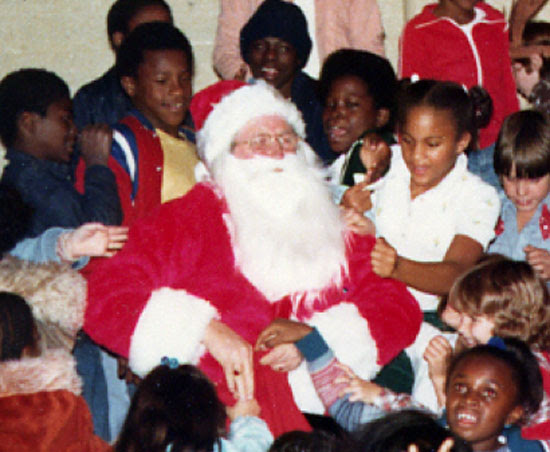 It had turned all yuletide "The Lord of The Flies" up in there!

Here are a couple more photos that my Dad dug up for you from the old family albums.
Unlike the photo above, they're all faded and blurry like they were shot from a grassy knoll. 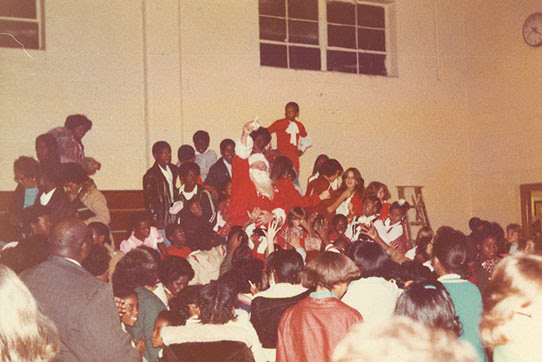 Look at that kid at the very top above wearing the flouncy red and white get-up!
I like how most of the adults are just walking away like "It's your battle to fight, Santa." 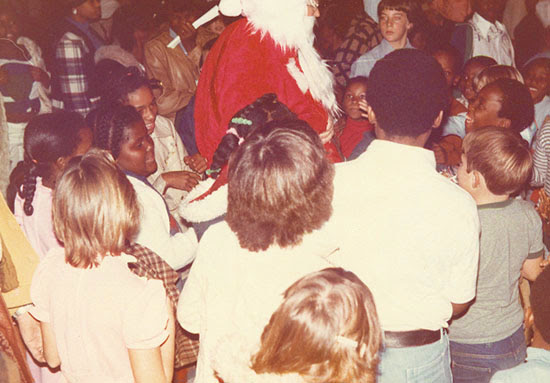 Looks like he's finally made it back down to flat ground again as evidenced by the manageable wee shorties surrounding him in the final shot. I bet the jolly old elf had the vapors by this point and his sack was a mere sweat rag.

Thank goodness I wasn't involved in the peppermint induced mob. I was up front on the stage, wearing a cardboard box wrapped to look like a Christmas present. No, I'm not kidding. My mom found photographic proof. 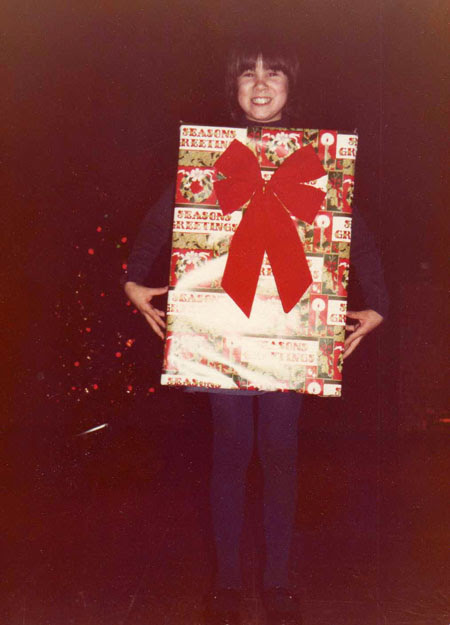 My first and only stage role. Blue turtleneck and blue tights. So 1977.

I remember that I had to sit down next to the Christmas tree and stay silent and still as if I were an actual inanimate gift box. It was the director's way of allowing more kids to have roles in the play but I still thought that I was a bad-ass for being chosen.  My brother reports that he was the "sound department" and stood dazed in the stage wing, clutching his jingle bells as Uncle Buddy was ensnared. I'm pretty sure that our brush with stardom saved us from being trampled and killed that day. We were always weak and pampered children, never up for quick adrenaline rushes or stick candy moshes. Uncle Buddy's grandson, Marty was on stage too, dressed like a small mouse. 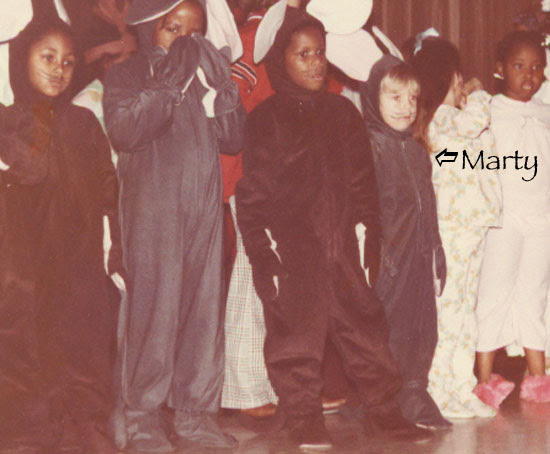 He could only stand there, helplessly wrenching his tail as the mob moved further and further up the bleachers, reducing his beloved grandfather to a bobbing buoy in a sea of children. Those bleachers were no place for tender mice or Christmas presents or little boys with jingle bells. We all knew it.

My Mom says that she remembers that Uncle Buddy's wife was absolutely terrified as it was happening - and Uncle Buddy saying afterwards that he was too - and that he couldn't get away from the kids, try as he might. They were both really shaken by the whole incident. Yay, Christmas.

Uncle Buddy Facts: He was a multi-millionaire who started out poor and made his fortune by building and renting out self-storage units and selling camper trailers. He used to sing Hank Williams songs all of the time and I can remember sing-yodeling along with him, "When she calls me sweeeet Daaaaaddy...such a beautiful dream.." He and his wife Edna had a big cactus garden, a beautiful home surrounded by the lake and a collie dog named Sport. He constantly chewed toothpicks and during the era of wide white belts, had quite the collection. He could cut a mean square dance and at Easter, he hosted egg hunts on his huge lawn where he would make sure that one "prize egg" was full of lots of folding money. Thus, the kids called him "Daddy Rabbit". He always did amazing card tricks and then one day, we realized that he was getting signals from his grandchildren to help him achieve such feats of magic. He was my grandmother's only brother. He never played Santa Claus again.

This is incredible!! I mean when I got to the part about "stick candy moshes" I nearly fell out of my chair! This made my morning!! THanks!!

I don't even know where to begin.

I was laughing my ass off AND totally horrified at the same time.

I really, really love the Uncle Buddy Facts. Im gonna steal that someday. Not for an Uncle Buddy, but I like that rundown of interesting things about people a lot.

oh my gosh i love the picture you've painted with this post. the running santa, the screaming kids, little terrified present eartha watching from the stage. geeze i'm so glad it was captured in pictures!

Oh man, me and my husband put on a Christmas puppet show for a women's shelter 3 years ago and when my puppet revealed a tray of candy for the children to come partake in those kids RUSHED the shoddy little puppet theater we were crouched behind. My husband was literally holding it up with both hands! The big kids trampled the little ones and there was so much crying, I just reacted and started throwing candy out into the seats so the little ones could get some. Of course a piece of candy hit a little boy right in his eye and he started screaming.... Lord have mercy! I think some kids just don't get many good things and when it's offered they just feel like they gotta get it quick while they can. :( .... You're story was hilarious! And is it me or do we all have a rich aunt or uncle? ;)

Wow, what on earth were those kids thinking?! That is just plain bonkers girl!!!

Uncke Buddy sounds just plain amaze-balls.....and Daddy Rabbit - you know I am all over that name! LOVE!!!

I'm laughing so hard I'm crying. FABULOUS story. I found your blog when The Vintage Wife linked to you last month, and hoo boy, I haven't been disappointed. I've looked around your archives a bit, and you made me cry for realsies with the story about Pam, the little girl in the movies you found, and I have laughed extremely hard at many of your other posts (plus your vintage style is awesome). You're quickly becoming a fave!

Hahahahahah!!!!! This is just the best Christmas pageant story ever!!! The mob of children and your poor Uncle Buddy. I'm seriously wiping tears off my face.

I actually laughed outloud at the picture of poor Uncle Buddy clambered all the way to the top of the bleachers and STILL being pursued by children! Poor guy! The way you told this cautionary tale about being a volunteer Santa in 1977 made me feel like I was there. I love the facts about Buddy at the end of the post, he sounds like quite the character. Also, how about your stage career as a wrapped gift? 15 minutes of holiday fame!

Poor Uncle Buddy. I'm surprised that experience didn't put him off kids for the rest of his life. What a great story...but probably not so great when it happened!

Okay,as an anti-social hermit,I had a panic attack just SEEING this crazed mob!! Imagine if he tumbled down those bleachers? It would be like that story in Gremlins where Pheobe gates tells the story of how her dad climbed down the chimney on Xmas eve dressed as Santa and broke his neck and died in there

Oh man,that pic of you as a present...LOVE! That is now a permanent item in my Xmas screensaver slideshow

OK, I dressed up like a Christmas present for a Halloween costume. When I was in high school. I think that officially makes me a bigger dork than anyone. But the picture of you dressed up the same makes me love you even more than I already do. :-) Which is as much as I love this post.

ah sweet memories are made of this . great photos, you were quite the gift, you should do it now don another gift box costume . oh yeah .

Aaaahhh the 70s! Such a magical time at Christmas! Uncle Buddy sounds like an interesting character. Guess he was too traumatized during his Santa stint to ever want to do it again!

oh my! well, the good news is you rock the wrapped box!

THIS IS AMAZING!!!
You as the little gift is adorable....and Uncle Buddy?? AWESOME!!!! xoxo

Wow amazing story...and so well photo documented in a pre blog...pre smart phone era! Also, you make a lovely present.,.i will wager 99% of my childhood costumes revolved around a turtleneck and leggings

I'm pretty sure the kid wearing the flouncy red and white get-up was Rick James. He was bustin' out on some serious funk, y'all!

Check out the girl in the lower right hand corner of the closeup.........She's got red eyes and vampire teeth!