Wilma Lee Will Be Missed

We lost one of our great classic bluegrass and country music stars today, Wilma Lee Cooper. Here she is with her husband Stoney and The Clinch Mountain Clan:

Wilma Lee and Stoney began recording in the late 1940s, then performed regularly on the Opry from 1957 until Stoney passed away in 1977. She was known as "The First Lady of Bluegrass" and continued to perform until she had a stroke while performing on stage at the Opry in 2001. The doctors said she would never walk again but she fought tooth and nail and regained use of her legs a few years later. She died today in her home of natural causes. 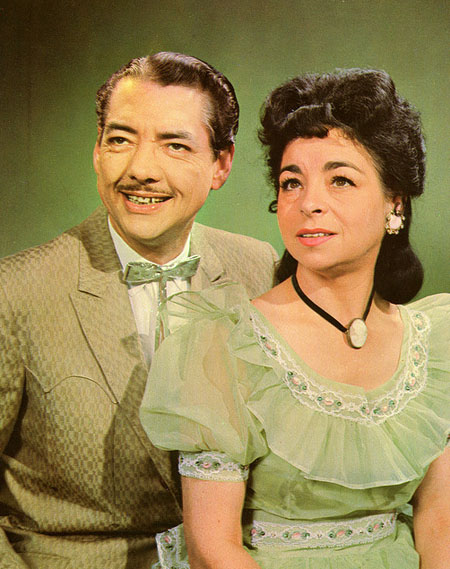 Rest in peace, Wilma Lee. I hope that Stoney met you on the other side with a song. You really do make a lovely couple.

Until next time,
x's and o's,
Eartha
Posted by Eartha Kitsch at 5:31 PM

Seriously awesome! And could her dress with that petticoat be any more fantastic???

You're adorable! So, I plan on having a blog giveaway to gain followers, will you please help me spread the word when I make that posting?
Thanks sassy pants!

Sad about her passing, but what a fabulous version of "Midnight Special", wow! Also, mad jealousy over the hair and the crinolined-OUT dress. RIP.

R.I.P WILMA LEE...DIDN'T KNOW HER BUT HER MUSIC SOUNDS WONDERFUL..USED TO WATCH THE GRAND OLE OPRY ON T.V. NICE BLOG..I'M YOUR NEWEST FOLLOW AND I'M A FAIRLY NEW BLOGGER AS WELL. @ SPOONWITHER.BLOGSPOT.COM..COME JOIN ME TOO..HAVE A BLESSED DAY AND A GREAT WEEKEND..HUGS JANICE