October: How I Love You

Hey y'all!  I hope that the month of October is treating you well! It's really flown by for me. And that's unfortunate because it's my favorite month - partly because it's the height of glorious Fall but mostly because of Halloween (the best holiday in the history of the world). I had a little outpatient procedure done last week that really threw me for a loop so I've done a lot of laying in bed and trying to get back up to snuff. I hate, hate, hate being stuck in bed. I get hella cranky, people. Just ask the Mister.

To fill the time, I've watched a lot of Lifetime movies. Way too many actually. One day I watched four in a row! And I don't even like Lifetime movies. What I've learned is that with most of them, you can predict the outcome within the first ten minutes - that is if the title of the movie doesn't give it away well before that. Thankfully, I have taken away one tip that I'd like to share with you all: If someone ever abducts you and makes you drive a car, you should sneak and put your seatbelt on (because bad guys never take the time to buckle up) and then slam on the gas and hit the side of a building or a retaining wall as fast as you can. Why, those abductors go flying through the windshield to their demise every single time! Would you believe that this was the ending in not one but two movies that I watched in a row? Boy, was I pissed. Completing a movie on Lifetime can often give you the feeling of, "Well, there's two hours that I'll want back when I'm on my death bed."

I've also learned that if your new love interest seems too good to be true, they probably are and have lied about their name and their previous time in jail or a mental institution and more than likely are going to try to kill you. Also, never make friends with the new neighbors because odds are that you or your spouse are going to end up sleeping with one of them and there will be cut phone lines and a stabbing involved in the end. Trust me. You're welcome.

Pip and I put up another skeleton in the kitchen, this time too high for the hell-on-wheels kitten to rip any limbs off. This one with a natty tie and googly eyes. And he gloooows in the daaaaark! 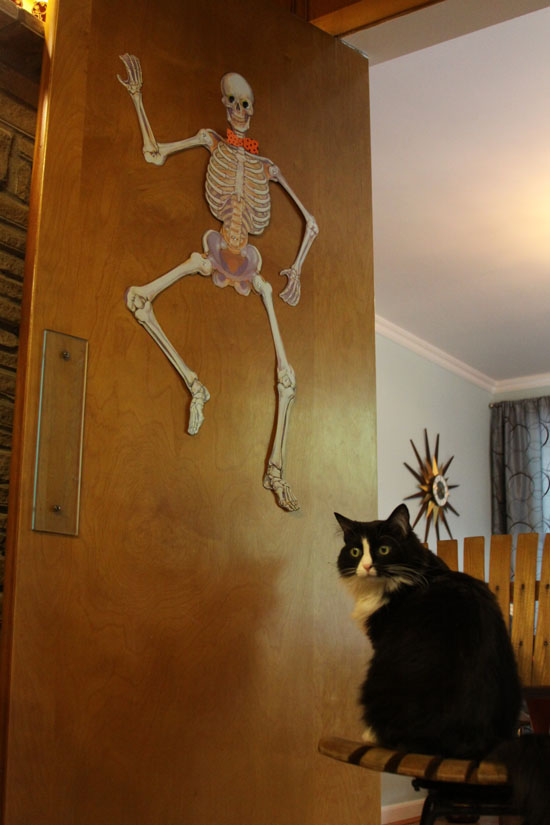 Pip is all "You mean he doesn't creep you out too??"

Also in the kitchen: I made the first big pot o' chili of the season. 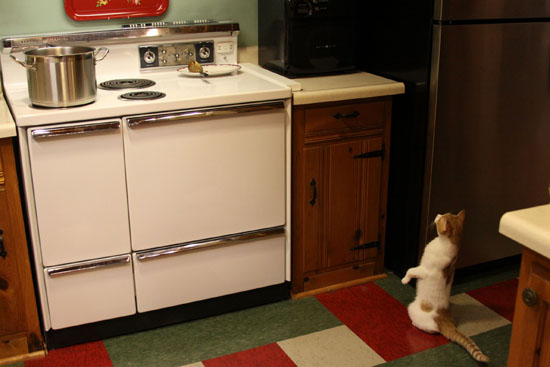 Mr. Kitten Pants went all Meerkat Manor on it!
He was really aiming to find out what was in that pot.

Also in the kitchen: Manna from Heaven

Our local market takes toffee apples and then rolls them in chocolate chips and nuts. I've become more than reasonably obsessed with them. And I love that they put them in the produce section so that I can answer the Mister's raised eyebrow with, "There are apples under there!"

I got that cute little girl there from a contest that I won from Ashley Marie over at Octopus Pie Studios. If you don't know her site, check it out. It's really great!

Off of the kitchen, we have a china cabinet that I like to decorate for the holidays. 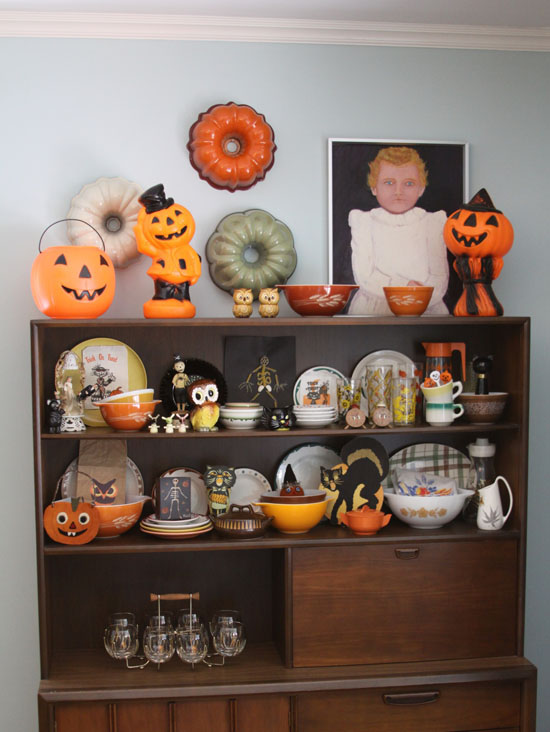 As you may know, vintage Halloween stuff is very hard to come by and super expensive so I don't have many pieces. Instead, I try to use Halloween-esque colors and go through my everyday things to see what might fit. I love the Halloween cabinet in particular because there are so many things in there that friends and family have given to me or that they've made. Sometimes, Halloween decor can be something as simple as knick-knacks that you already have around the house.


Like these owls that look pretty alarmed all year round.

Or this painting that was done by a former owner of our ranch. 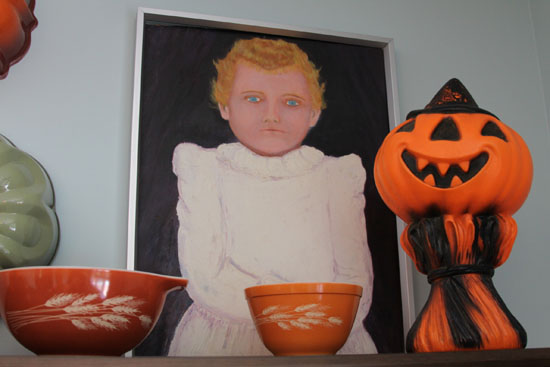 Yes, her skin is purple!

Here are some other peeks at the cabinet. 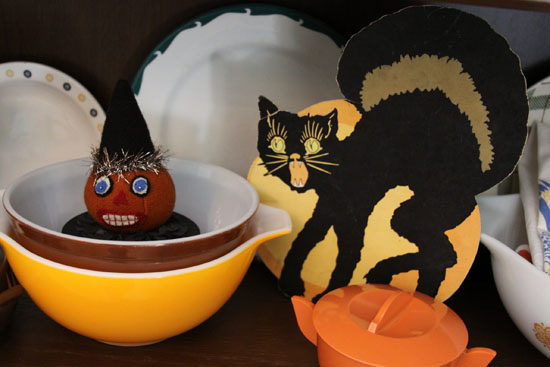 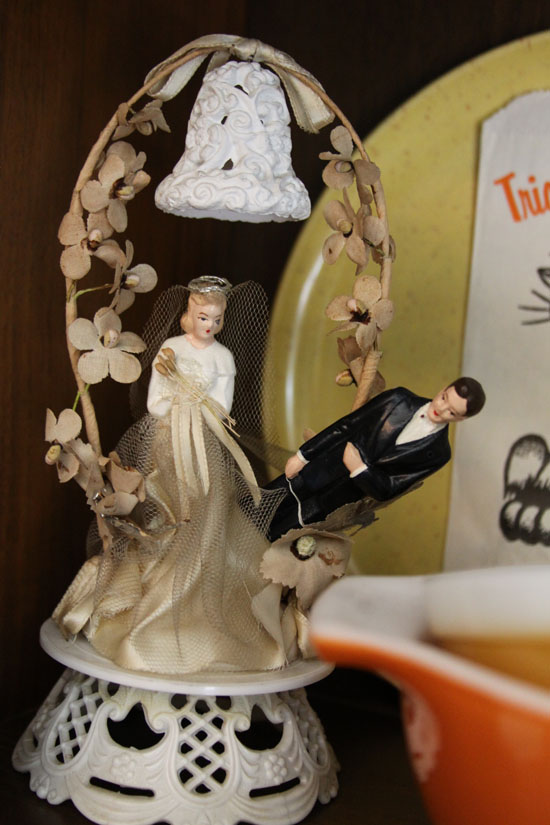 This cake topper came like this with the groom broken off. The bride has a black and blue eye!
I got it at a yard sale for less than a buck and the lady couldn't believe that I wanted it. The years hadn't been good to the topper but it's perfect for Halloween. Or for the final shot in a Lifetime movie. 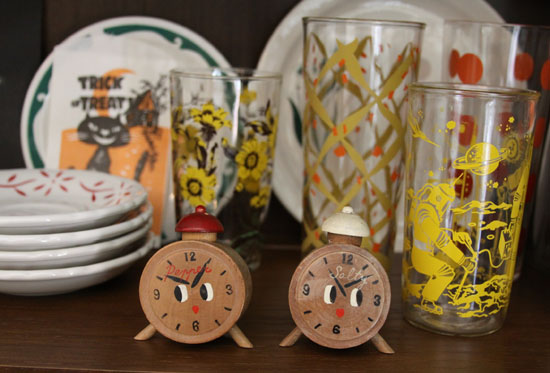 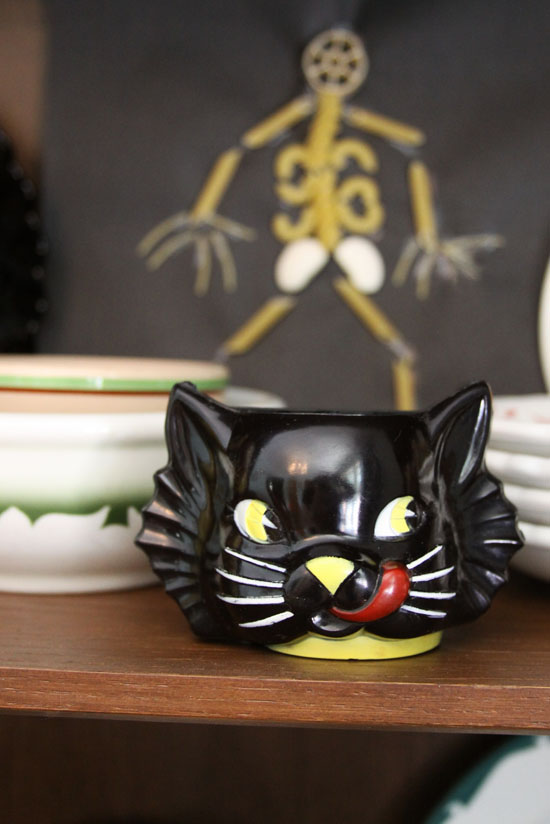 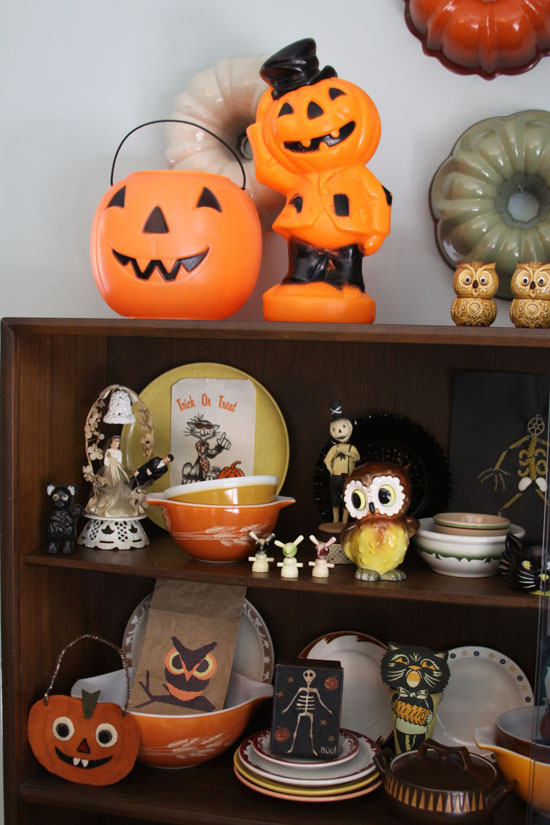 And a few spots in the rest of the house that have begun to get Halloween-ed out. 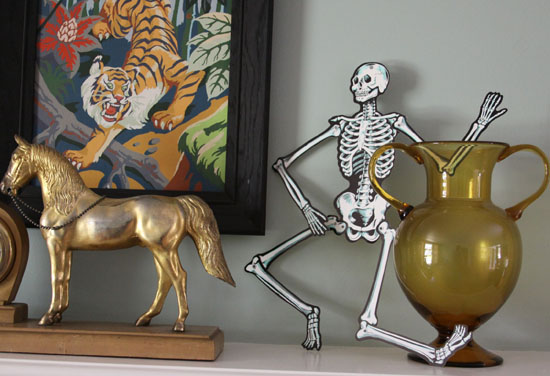 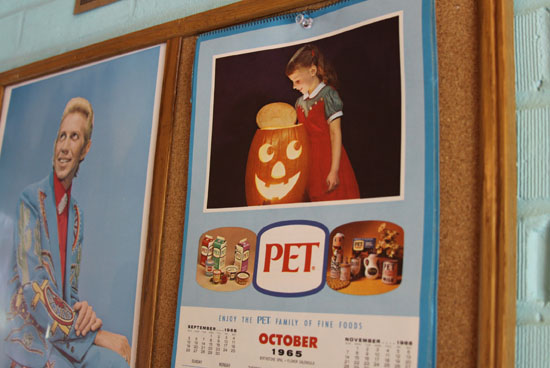 What about you guys and girls? Do you go all out for Halloween or is just a "Boo. Meh." holiday for you? Have any favorite Lifetime movies that are worth staying awake for?

that china cabinet is glorious! and those bundt pans are just the prettiest

Oh I go all out! I LOVE your decorations! And lifetime - ah! It's gotten to where I think I've seen them all. Bastard out of Carolina!

I love that china cabinet!

And to be honest, in that first picture it looks to me like PIP is the one with googly eyes.

Your china cabinet looks great. After my daughter grew up, I got pretty lax with the decorating, but now that my grandsons are getting old enough to understand holidays, I'm doing a little more. I'm sure, as they get older, my decorating will get more elaborate.

Ha! Lifetime movies.....so true, so very true!!! And I guess that is the reason we don't trust any of our neighbors - they all look like they are gonna stab us...for no reason! :)

Gosh, I wish I had your energy to decorate. I really used to be into it, but lately it's just not happening for me. Seems like I can barely get the Christmas stuff out anymore. Maybe it's all that sanding........... :D

adooorable!!! sorry to hear that you've not been feeling well. (the tooth stuff?)

ALSO guess what - i'm getting your china cabinet's twin!!! my mom and dad got it for me months ago and my mom is working on sprucing it up cause it's in rough shape. i had no idea it matched yours exactly though!!! did you take the glass out or did it come without glass? i'm deciding if i want to keep the glass - i was leaning toward yes until i saw yours!!!

ALSO i was at the brentwood target today and in their $1 section, they had some halloween decorations that look very very very very close to being repro. i was impressed - you may want to check them out if you're feeling like you need some more!

Eeeep! I love that black kitty head! His side head fur makes me think of the creature from the black lagoon. Awesome. So funny, I have that exact same plastic pumpkin head with the top hat and the glass cup holder at the bottom (minus 1 cup.) Cake topper is hilarious too and your kitties are very photogenic. :)

I love the decor! And it looks like the oven is working again? That is good! Halloween is a huge deal at my house because it is my 5-year-old daughter's birthday. So, we decorate and celebrate in a big way.

First off .... hope your in tip top shape soon! Second ... love all of the pyrex and the pretty bundt pans you decorated your cabinet with. And I too am obsessed with caramel apples but have never found one with chocolate chips and nuts ... yum!!

conclusions: I want all your bundt pans and am jealous that you had time to watch 4 lifetime movies today. I want your life.

That painting...is haunting... I can't look away.

Sorry to hear that you've been under the weather. I'm so glad that Lifetime is not a part of our beyond-basic cable. Given my viewing habits, I know I would get stuck watching those movies. Seriously, I will flip through the channels looking for something and I invariably end up watching HSN, QVC, or telanovelas (none in which I would ever express any interest while the TV was off). Do I even understand Spanish? No (it's just a coincidence that no is the same in English and Spanish). Also, I LOVE, LOVE, LOVE Halloween!!! It is just pure fun combined with candy (which I also love).

My sister and I always had a tradition growing up, watching the Sunday Cheesey Movie on channel seven. This was before Lifetime was a popular channel. The movies they played were supposed to be dramas but we just laughed at how ridiculous they were!

All your decorations look just fabulous, but my favorite is your real-life black and white kitty! The look on his face is classic.
That painting of the little girl is truly frightening...

I love, love, love Halloween! Last year was our first in this new neighborhood/apartment, and I decorated like crazy, bought a ton of candy, and got exactly *zero* trick-or-treaters :-((
Turns out our neighborhood is heavily Orthodox Jewish, and they don't *do* Halloween! Who new? So this year I'm putting all my energy into my costume.

Thanks for showing your cute decorations :-)

Yes! October is the best month! My favorite, too. Not so much because of Halloween, just because I'm a couch potato at heart and I love rainy days inside.

I'm not much of a Halloween decorator because I sort of hate how it's become such a thing people seem to feel they need to do. Too much like Christmas. My mom used to tape the same cardboard witch and ghost to the living room window every year and call it good. And it was. I think if I see another blog post with white pumpkins this year I'm gonna...something.

But I love your decorations. Orange. Black. And purple on a sorta creepy face. Hope you're feeling better--

That eerie painting is pure Children of the Damned!

Dude,your china cabinet is awesome,totally impressed by the staging. I say get your fall on at top speed and enjoy the rest of it while it's here. Just don't rip your stitches

I love your decorations, especially excited to see your pyrex. I have the same autumn harvest bowls decorating my kitchen table right now. I found a vintage fall tablecloth that looks kind of Halloweeny. Is that a word? Anyway, I do like Halloween and still need to get some more decorations up.

That is the funniest picture of Pip, it looks like he is thinking "what the heck is going on here?". I hope you feel better soon!

"Mother May I Sleep With Danger?" will NEVER get a No from me! The Lifetime movie at it's best!