The Airport: What Remains

A couple of weeks ago, the Mister and I got to go ramble about in our old local airport, the Cornelia Fort Airport. The airport was established in 1944 and although there were financial issues in it's final years, it was still going in 2010 when a devastating flood hit our area. Note: For the most part, the national media ignored the flooding that killed over thirty people in Tennessee and caused over a billion dollars in damage. So many people that aren't local don't even know that we had a flood here. It came fast and without any warning. It's been two years now and many people are still trying to pick up the pieces and have lost homes, businesses, family members and pets that can never be replaced. It was the largest rainfall on record in 140 years. We'll never forget the two straight days and nights of rain that came and didn't seem to want to stop.

Sadly, the Cornelia Fort Airport was one of the casualties. The flood destroyed any hope that was left for it. Over twenty planes were left under water and the aircraft parts warehouse with more than $1 million of inventory was flattened by a landslide from a hill behind it. The flood tragically sealed the fate of Cornelia Fort Airport. 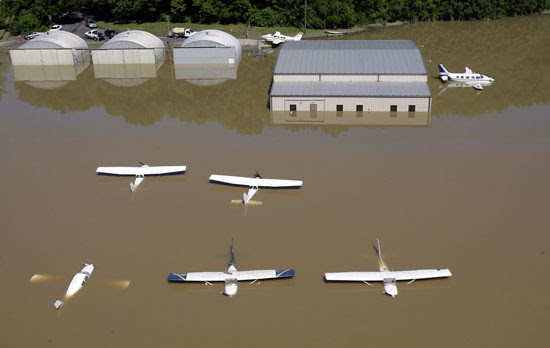 What is left will soon be razed and the land will be added to our local park next door.


Fascinating History: The airport was named after Cornelia Fort, who belonged to a prominent Nashville family and was the first female pilot in American history to die on active duty. She died in 1943 at the young age of twenty four while serving as an aviator in the Women's Auxiliary Ferrying Squadron. She is also said to be one of the first witnesses to the Japanese bombing of Pearl Harbor and consequentially, the start of World War II while she was acting as a pilot trainer. And since I always love to have my Patsy tie-in, this airport is where Patsy Cline and her fellow passengers were headed the night that their plane went down in a storm, killing everyone inside. Oh, sweet Patsy....

What the heck were we doing in this place? An art show is being curated which will include pieces made from items found in the flooded airport. Many local artists were invited inside to glean supplies for their pieces for the show. Our friend Don (who is an amazing artist, all-around great guy and secretly a magical wizard, I think) kindly let the Mister and I come along with him and our other friend, Stacey as they picked the buildings for their art pieces. It was absolutely fascinating and I was wishing that all of you could be there too. I did take a ton of pictures so that you can peek inside of the buildings and hangars. 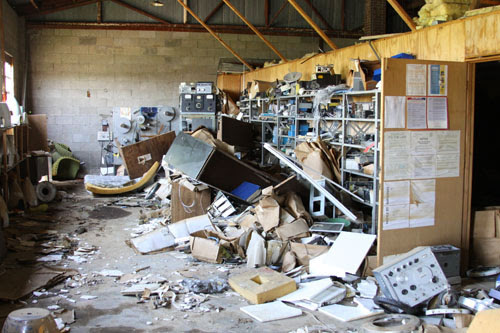 It was really jarring at first, seeing how everything had been destroyed by water and mud. Most things were tossed around and piled in heavy metal drifts.

You know me. I was reading all of the paperwork.  <---dork 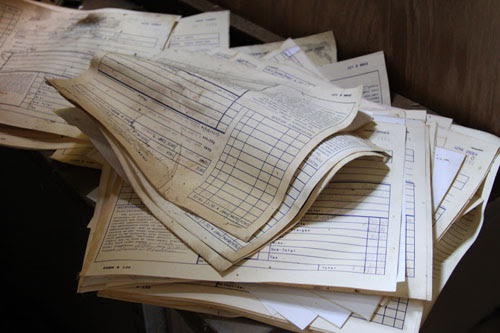 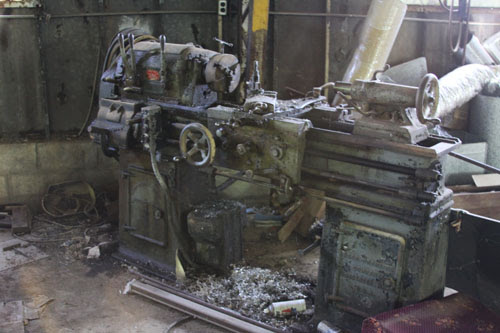 The buildings alone were really beautiful. 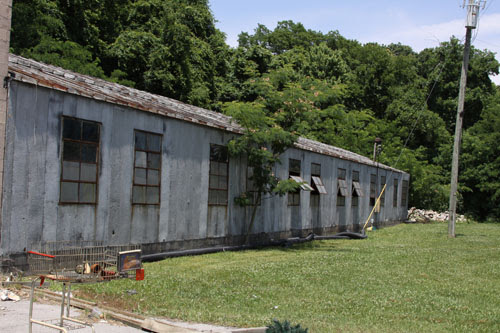 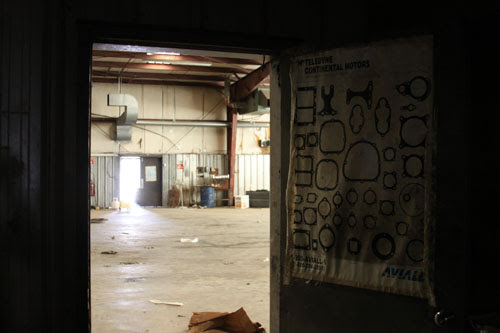 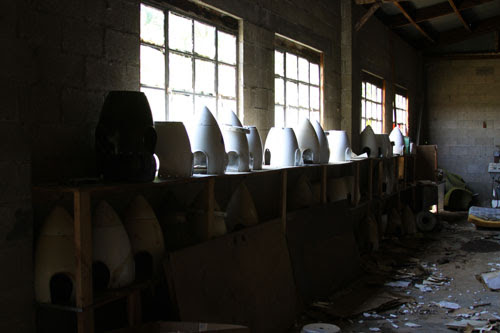 I couldn't help but think about the people who used to work there. 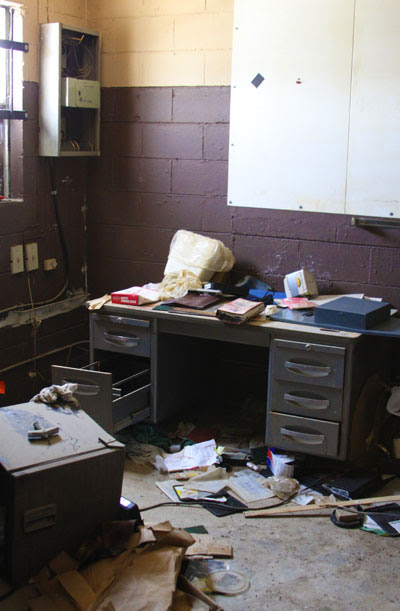 There was a lot of really cool things everywhere but unfortunately, they were too covered in mud and mold to be reused. This stuff sat under water for quite some time and has been sitting for two years so the rust and mold was pretty overwhelming in some areas.  Some places were really hard to breathe in. 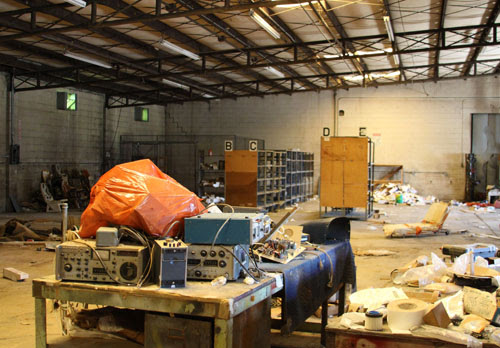 It was fascinating to see all of the electronic equipment and parts scattered around, though I had no idea what most of them were used for. I kept wishing that I knew how to make my own house cleaning, foot rubbing robot as I think this would have been the day to gather parts for it. 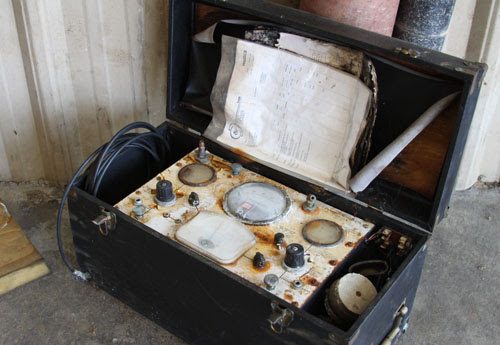 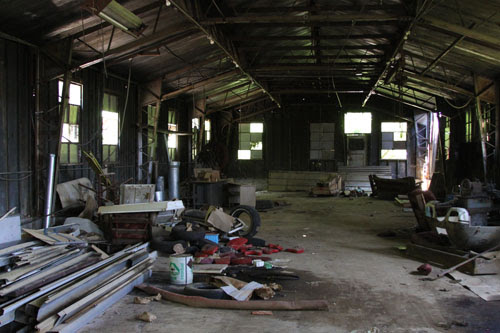 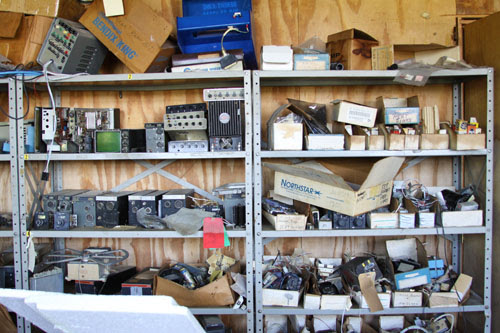 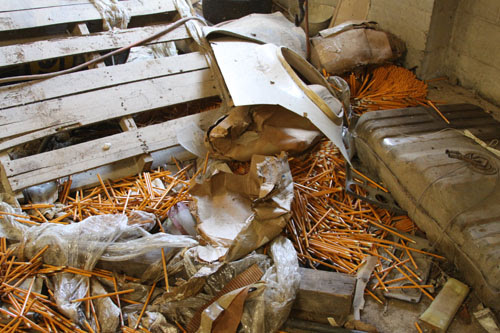 Thousands of pencils spilled across the floor. All ruined from the water. 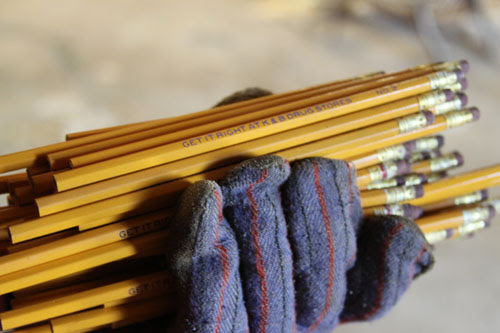 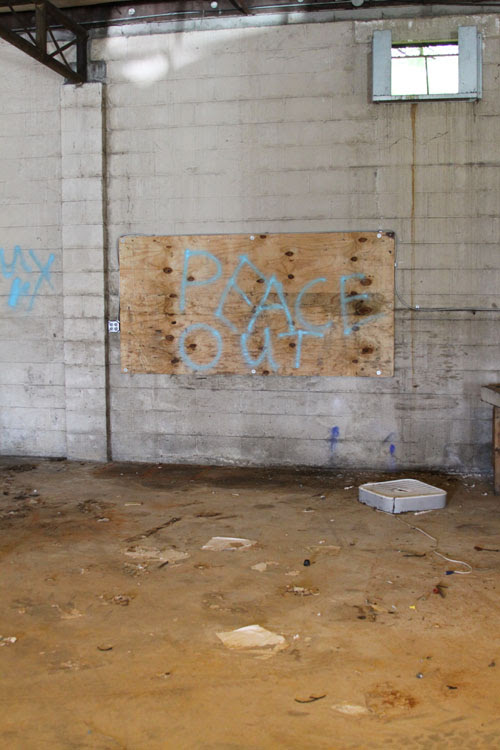 Though terribly fascinating, it all felt so sad - seeing such a historic place and it's contents ruined. The City will sell as much of the larger things as it can and of course, recycle the metal. I can't wait to see the pieces in the show and how a lot of the items and materials have been used. It's good that they'll get to live and function again through art. 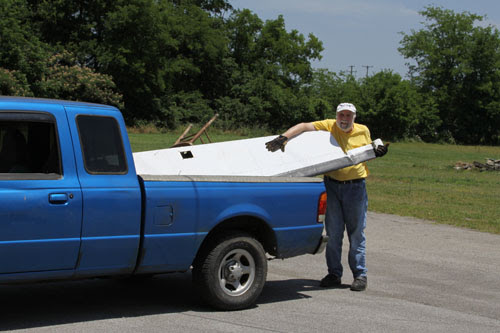 Oh! And Don got an entire airplane wing! Hee! 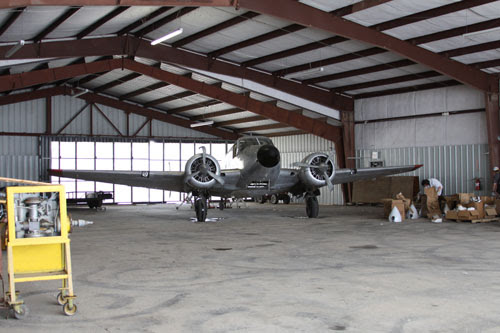 And there was a beautiful airplane from the 1960's! This one has an interesting story. A couple of months ago, in the dead of night, this plane belly-landed at the closed airport. The next morning, the authorities found the plane sitting on the runway which is now waist high with weeds and unfit for landings. It was a huge mystery. Nobody knew who the amazing old plane belonged to and neighbors hadn't seen the pilot who for all intents and purposes had disappeared into thin air.

Personally, I wanted to believe that the plane and pilot had come straight out of 1961 as in a time machine into the future and now, the pilot was walking around East Nashville, amazed at the modern world. My hopes were dashed a couple of days later when the authorities found the pilot who claimed that he was having mechanical issues and had to land in the abandoned airport in the middle of the night - but as he has a sordid past that includes drug smuggling, money laundering and holding an airplane hostage (no joke), the issue is still up in the air! Pun completely intended. It was still so cool to get to see the plane up close and to imagine if I had indeed been able to find the time traveling pilot and convince him to take him back with him into the 1960's.

I hope that you enjoyed the tour of what's left of the historic airport. Hopefully, I'll get to show you some photos of the pieces that are made from the ruins - especially what Don makes out of that airplane wing! Of course, I not-so-secretly hope that it's a time machine.

Posted by Eartha Kitsch at 1:55 PM

Wow - kind of like time had stopped. I love investigating into odd things like that. Look at all those pencils. How eerie!

Wow, these pictures are amazing. I'm glad something creative and constructive will come out of all this destruction. Thank you for giving us a look at all this. Looking forward to seeing blog coverage of the art show!

Silly girl....Don't you know in this society it is way more acceptable to be a drug trafficking, money laundering kidnapper than to actually admit you're a Time Traveler. He is probably aiming for his own reality show.

how cool! i can't wait to see what he does with that wing!
oh the flood, i was stuck at work and our store flooded! and my basement! that was a crazy couple of days. i can't believe it didn't get national attention.

Oh, you can't tell me that tanker desk can't be rescued!

far out i got totally absorbed in your post and all the stories..

Mold or not, I would have been packing the car with stuff. Love that kind of stuff!

So hoping that 1960s plane isn't part of the trash!

It's sad to see all that stuff still sitting there, in situ. You couldn't help but think of the people who went to work there every day. Anyway, one of the best art installations I've ever been to was in our city's former natural history museum. Many of the original exhibits were still in place, but damaged. A local arts group took the place over, and artists created really cool pieces, using the circa 1950s-1960s items still left in the museum. I bet what your local artists create with the items gleaned from the airport will be equally nifty--you'll have to report back when you go!

I've gotta say I just love your stories about going into old time warp environments. Nothing thrills me like finding 'the (blank) that time forgot'.
Thanks for another great adventure.

Reading this post made me feel the way I used to feel walking around my great-grandma's farm when I was a teenager. By that time, the farm hadn't been a working one for more than 10 years. Broken down hen houses, weeds growing tall all around, fields gone to grass. Sad and beautiful and haunting all at once. Left me full of wanting and grieving for something I never had--just like this post. Then you go and throw Patsy into it, too? Think you're just trying to break my heart this morning.

Oh wow, its like opening up an ancient tomb where time has stood still. Very cool!

I love the time traveling pilot story. Think how many people would buy tickets on those flights!

As for the flood, I live in Michigan and my local NPR station followed the story. I have not forgot about all the lives lost and altered. It was and still is a tragedy.

it's really amazing to get to see inside of that place! the picture with the pencils really caught my attention for some reason. idk.

What a fascinating piece of story/photo journalism. I had no idea about the flood either. Your blog just makes my day

That plane looks like a Beechcraft Model 18. It could be considerably older than 1960s- your time traveler could have been from WWII!