Today, we've been doing a lot of waiting around the house and decided that maybe dip was in order. I saw this little Octopus guy over at the ever so fabulous Faith Hope and Charity Shopping's Pinterest a little while ago and loved him. Let's face it - Novelty food sorta kinda rocks. 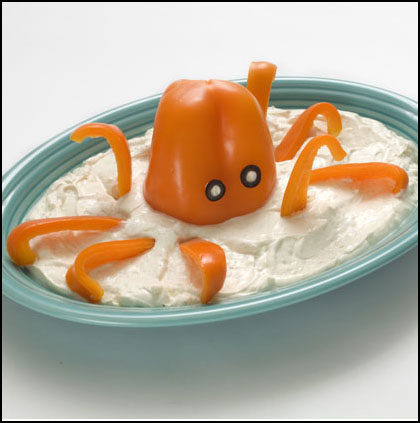 And we thought we'd give him a shot! 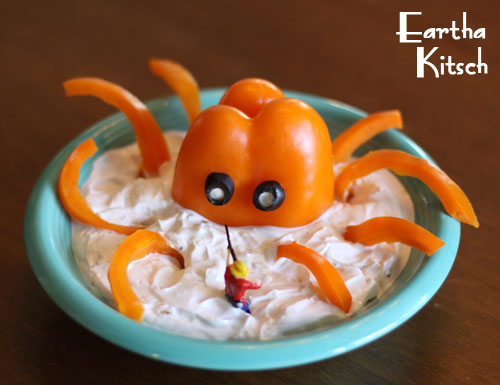 Literally. We decided to take the recipe a little further and add a little Man vs Nature drama:

(I won't tell you how this one ends in case you want to see the movie.)

Dip makes great waves, don't you think?
I tried to talk the Mister into just a wee drop of blue food coloring but he said "Meh".
I just realized that ranch dressing would be on par for this.
The mind wanders.

As far as I can tell, the original source is here. If you'd like to make one for yourself, all you need is dip or hummus, black olives and two orange peppers.

One tip that we learned too late is that it's best to incorporate the butt of the pepper when cutting the strips for tentacles so that there is more curve to them. Also, a larger platter works best to make things look more realistic. If I ever made this for a party, I'd probably use a horizontal platter like they used on the original one and give more room for a sunken boat. Because when you're making wacky food, you can't get too wacky, I say!

Hope that you're having a great Saturday!

Until next time,
x's and o's,
Eartha
Posted by Eartha Kitsch at 5:22 PM

The little man makes it so real it made me shiver! What a cute idea.

Love it eartha, I'm going to feature it on my Wacky Wednesday posting!

Goodness, that is ... there are no words! I can't wait to try this out!

cute!!! i love your addition of the little man.

hahaha I love it!!

And that hunter is the icing on the cake!

This is one badass dip! Love it.

Okay, you know whose side I'm on, right?

Ahhh this is sooo cute!!

Squeeeee! Best use of the cephalopod theme in food EVER!

I LOVE it! Going to have to copycat you for my next party...and maybe use a chocolate pepper to create a Moby Dick, too! Your addition really makes it awesome.

you are a genius. hahahaha.

Im going to make this for my kids this afternoon, they are going to love it!

Oh my goodness you've out done yourself!