Things are bazonkers at the ranch right now. Little Mr. Kitten (final name pending) has been with us a week today and boy is he ripping things up! 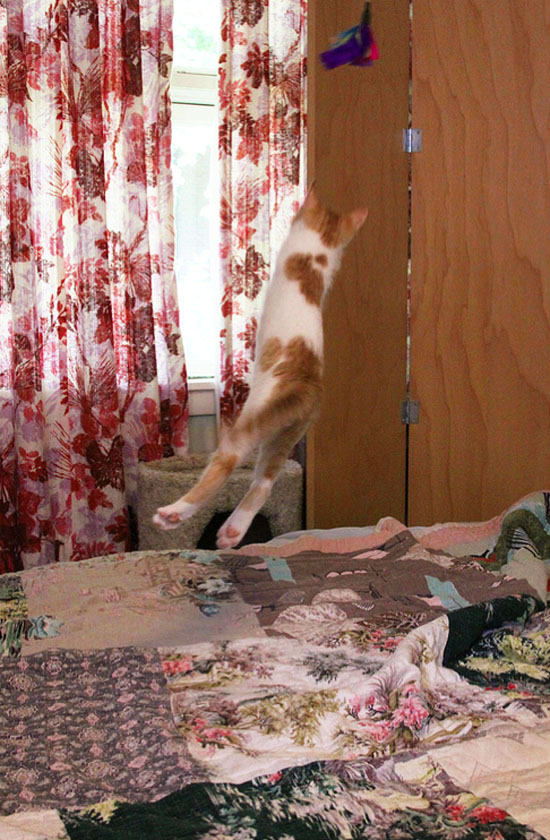 He can jump higher than any kitten that I've ever seen. And look at those ginormous feet! The other cats are still scared of him. Well, two of them are. The other one is just grumpy and has had her grumble button stuck in the "on" position for seven days now.


In other news, for the past two years, our foyer has looked like this: 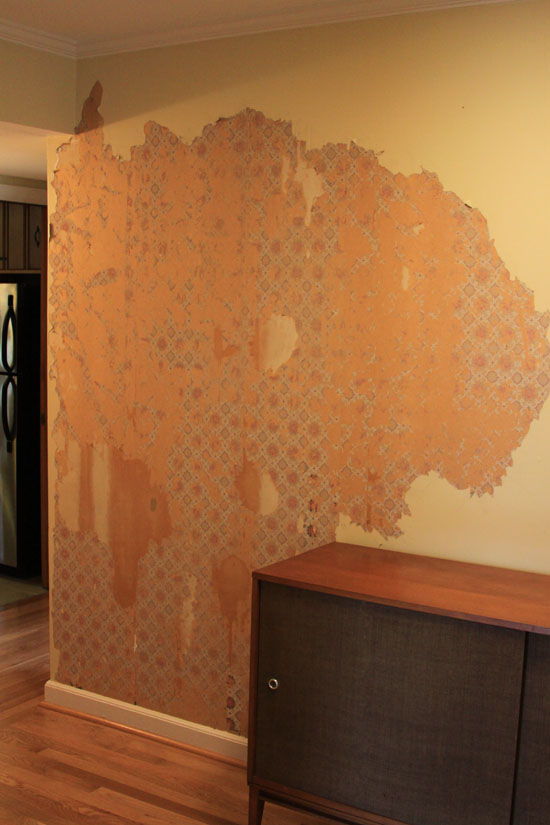 Pretty.. ain't it?  I think that it's that "shabby chic" that people talk about.

When we moved into the house, the foyer and the hall that runs through the entire house was painted over wallpaper and it looked so crappy. So, I decided that I was going to try and pull it down. Unfortunately, the walls hadn't been sized before the wallpaper was put on back in the 50's. The paper was put straight onto drywall. Oh boy. So, I got one wall done and realized that we were going to need new walls. Which is what is happening now. Dust. Mess. Tears. Cursing. Coughing. Waiting. Hoping. Threats of moving. 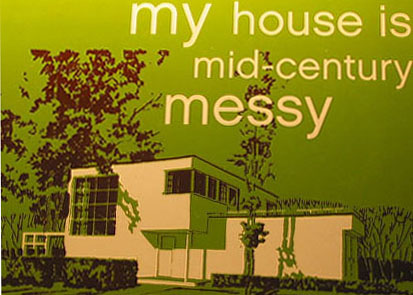 The job started last Thursday and is still going on. We procrastinated for two years and finally, it just had to happen. Stay tuned as hopefully there will be an "after" soon! Oh gosh, I hope so at least. I'm not sure why we chose to adopt a new kitten at the same time as a major renovation job but sometimes, life just happens that way. We're going to have to make him a tiny little dust mask.


I happened to come across a photo of when we bought the house a few years back. 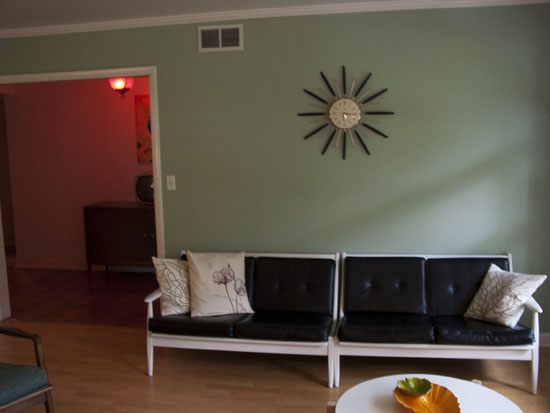 There used to be this blood red light fixture in the foyer that made it seem like you were entering a creepy haunted house when you came in the front door. I actually loved the fixture itself but the area was wrong. When it was on, red light poured out of the windows on our front door making it look like we were running a bordello. And let me tell you, I was too tired from moving to entertain any gentlemen guests. Though, if I'd known how much renovating an old house can cost, I might have reconsidered.

There were also two different colors of wood on the floors that butted up into the foyer which was really strange. The brown part was real wood but the yellow part was Pergo. Every time that we walked on the yellow part, it made this hollow sound like we were tap dancing. I kid you not, the kitties' claws kept us up at night as they walked across it. Yes, I think that some "after" photos are going to be in order if we ever get this job done! It was replacing those floors that made us put off the joys of another big renovation job.

We're in the process now of trying to pick out a paint color which admittedly, is one of my least favorite jobs. We also bought some more lights for the hall and a ginormous landscape portrait that will be hung. We got it an estate sale last week and are trying to air out the 1950's musty basement smell that it came with. At this point, we're thinking a treatment with odor absorbing clay might be in order. And an exorcism.

I hope that you all are having a good week so far. Come by tomorrow and if I'm still living, I'll show you some crazy granny crafts that I snagged at that same estate sale last weekend. If you're into that sort of thing!

Until next time,
x's and o's,
Eartha
Posted by Eartha Kitsch at 1:01 PM

For the painting: Is it small enough to be enclosed in some sort of plastic bag? Like a huge leaf or trash bag? If so, you might try enclosing it with either baking soda or bath bombs (Lush.com, they will mail them to you if you can't get to a store, and after the painting smells better, you can have a nice relaxing bath, which you may need after home repairs.) Kate H

Can't wait to hear what Little Kitteh Man's name turns out to be. Those FEET -- he's going to be a big boy!

Feel your pain on the wallpaper. Scraping off 50+ years of wallpaper at my house necessitated having the walls re-textured, because that last layer took the plaster off with it. Ugh!

Amazing kitty shot! I'm attempting to be sympathetic about your renovations but really I'm just cross that our own move fell through. I do like the sound of a granny craft show and tell though - have you seen my blog party 'Ta-dah! Tuesday'? You should link up tomorrow.

Hilarious as per usual. Paint selection is like... kind of fun but also horrible. I never want to be the woman who picked that shade of green that is just off (really, what do I care?)

get one of those motion detector room spray and put it on the window sill where you want him to stay away and for the walls staple up bubble wrap it comes in big rolls and would look so ... ok unusual and unique but will accent the free furniture wonderfully .

That is an awesome kitty photo! I swear you get the best photographs! Though I feel obliged to warn you that based on those feet...he's going to be Very Big. Those look like Buckley's paws—you know, the ones that caused our vet to laugh and laugh and laugh for about five minutes the first time he saw Buckley? Yeah. Those.

Can't wait to see the makeover! Sorry about having to install new walls, I wondered if that is what you'd have to do. Had I known I'd have just told you to put everything loose in a box 'till it was all over...less to dust. Gracious, just sanding out the patching I've had to do to these walls has created a huge dusty mess, and I remember what it was like to drywall the upstairs back in WV...ugh. But when it's all over, you'll be so happy!

So far as the painting, what about stashing it in a trash bag with a whole box of baking soda emptied into it? Sunshine does wonders, too. Maybe set it out with its back to the sun.

Good luck with your renovations! I can't wait to see the after photos. Your kitty is too stinkin' cute :)

Oh my gosh, that kitten looks SO cute, if only I could have that much energy!!! :D

I am totally excited to see what the new hallway looks like, you are going to be SO happy when it's done, but all that dusting.....I don't envy that. eeks!

Pergo, uggghhh - not my favorite. :( Your new floors are SO gorgeous though!

New kitty is adorable!I have been in renovating limbo so I feel you lady!

Of course I'm into that kind of thing!

I'll be curious what ends up getting the smell out of the painting. It's much easier with fabrics but dang, after that and all bets are off.

Good luck with your foyer, and picking paint, too! We're still sitting around with paint chips in every room and I seem to want to paint half the rooms almost the same color. Ugh.

I certainly am into that sort of thing! You're hilarious, though you need a good sense of humour to put up with a major renovation project and a (gorgeous) kitten who's at that awkward kill everything stage

oh goodness, that first picture made me laugh out loud when i saw the thumbnail on my reader. i miss kittens, and don't miss them at the same time.
i haven't tackled taking the wall paper off the ceiling in our room because i'm scared we're going to have to put up a new one. so i'm dealing with the roses for now (and they aren't cute retro kitsch roses either, just ugly ones)
i can't wait to see your granny crafts, though i'll probably cry that i didn't get them, haha. i'm still mourning the super glue poodle cover.

our cats still haven't fully adjusted to the kitten. there's always a grumble or a hiss coming from somewhere. i think they know she's a pure bred and they hate her for it. haha.