Oh, it's Fall in Tennessee! And Fall is my favorite time of the year! Do you say "Fall" or "Autumn" in your neck of the woods? I love the way that "Autumn" sounds but feel too fancy saying it.

The weather is getting pretty nippy here and at night, we're piling on the blankets. And the cats. It's a wonder that I don't dream that I'm trapped under a truck with all of the cats that pile on my legs when I'm sleeping. They're complete and utter opportunists. Cute opportunists though.

Speaking of the cats, this is Mr. Kitten Pants' first Fall season. He's already started enjoying sitting in the window and watching the leaves blow around and is particularly interested in the squirrel that lives in the knothole of the tree out front. Today, he got particularly amped because he and Pip got to help me decorate for Halloween.  Oh! And he got to see the first faux fire of the year! (and of his life) 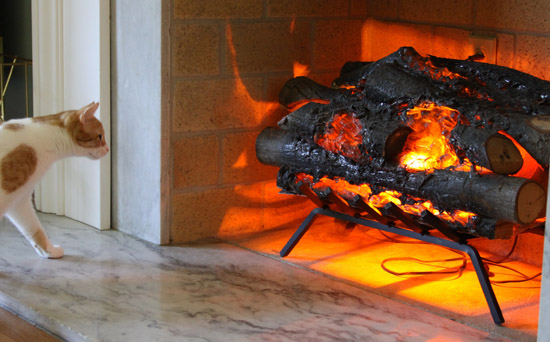 Of which he was completely terrified.
I think it was the crackling sound that put him on edge. 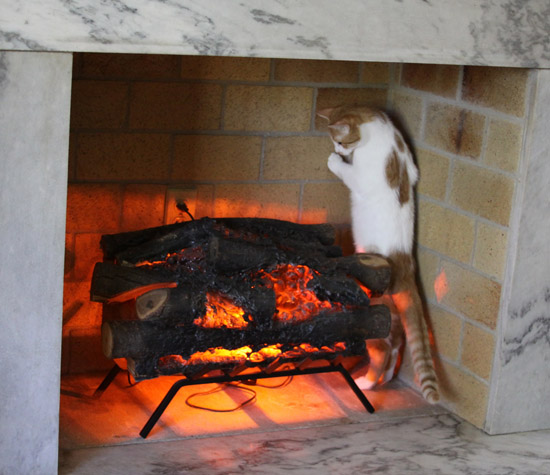 He did everything in his power not to actually come in contact with the thing.

Then he discovered old Mister Skeleton lounging around. 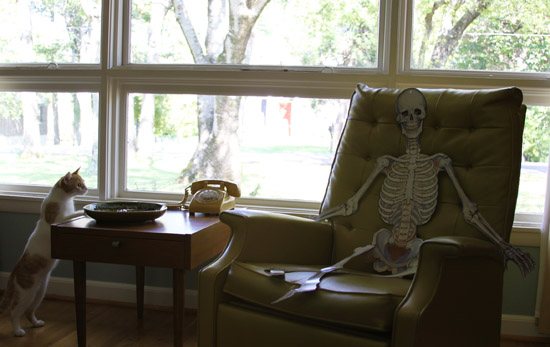 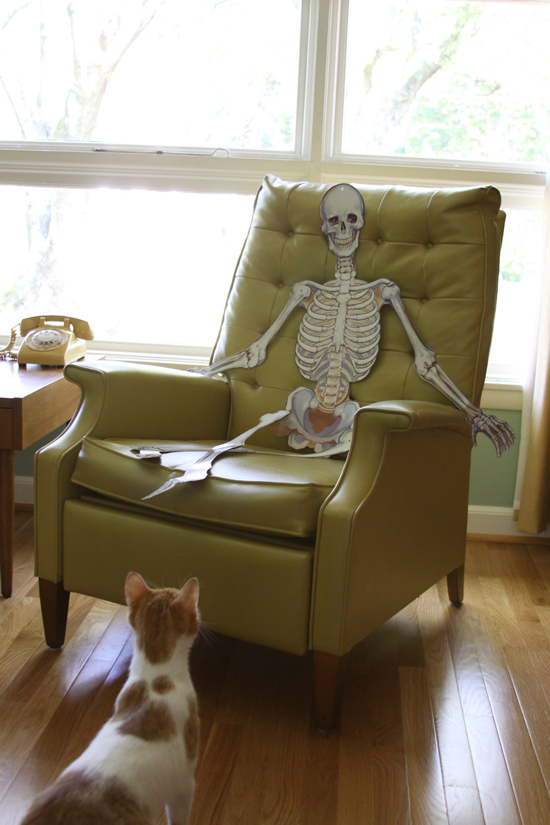 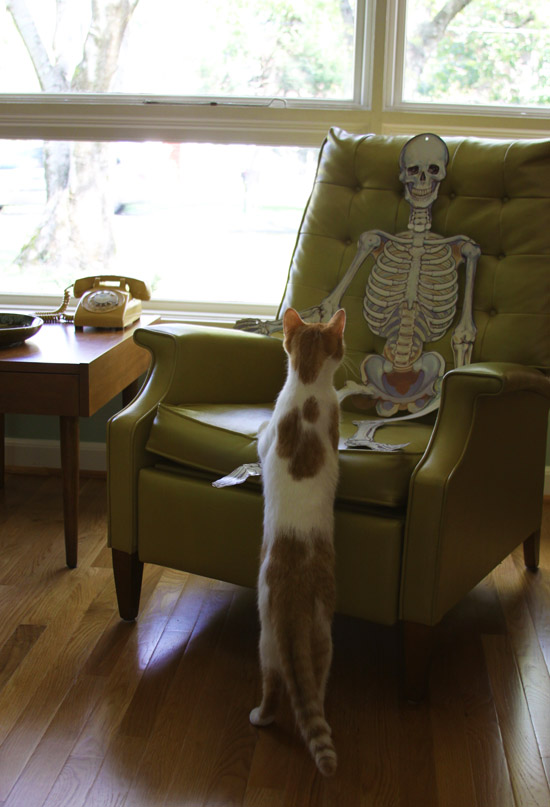 He never really did want to get involved with him but later on, he grew confident enough to
steal a closer peek. 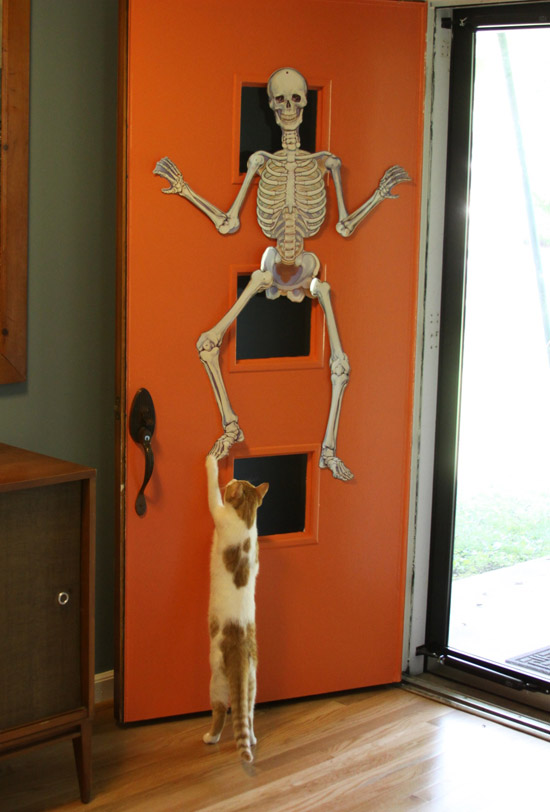 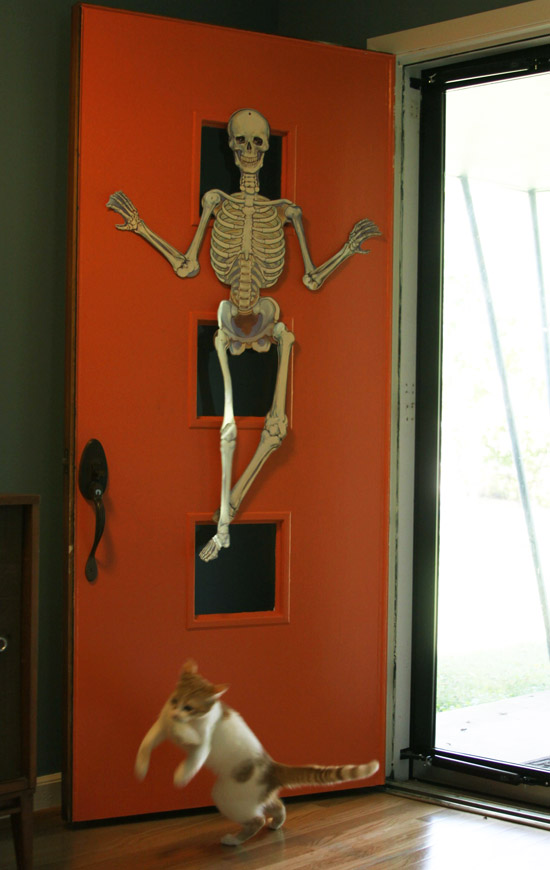 That, my friends would totally hold up in a court of law!

There's one thing about it though - after all of the edge-of-his-cute-little-seat adventure, he was pooped and soon fell prey to a catnap. 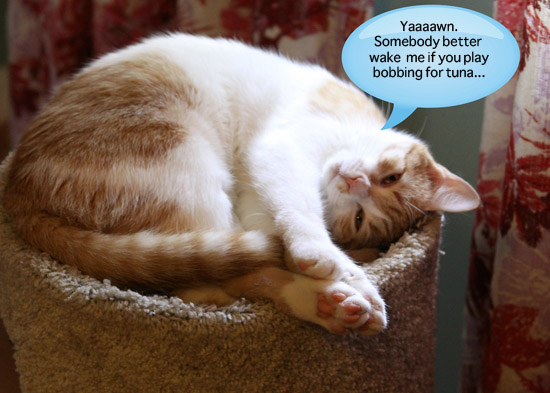 This Just In: Pip demands equal time in this post.

Doesn't this shot of Pip remind you of every scene in every horror movie ever where the female heroine doesn't know that the serial killer / creepy monster / alien from outer space is.... 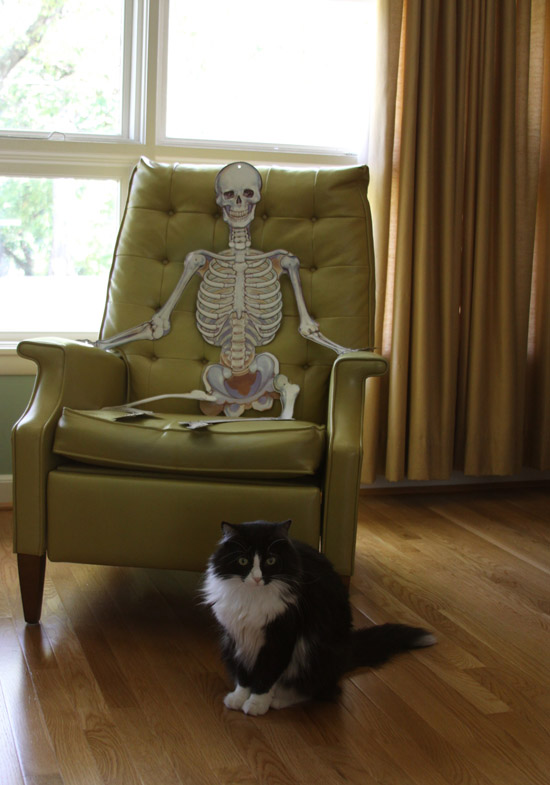 Have you ever noticed that in those films, upon hearing a noise, the victim always yells out, "Who's there?!" Never once have they been answered back the way that they'd want to be. Just a tip - never ask who's there. Oh wow, another thing that I love about Fall - scary movies! Want to see some of the worst (and thus in my mind -  the best)  horror movie monsters through the decades?


I think that I used to work for the Watermelon Monster. Always chewing on my arse, that one.


What about you all? Doing fun things to prepare for the change of season where you are? Anything that you're looking forward to the most?  Do you have any cat burglars at your house? Do posts with nothing but cat photos make you break out in hives. Do tell!

Posted by Eartha Kitsch at 2:13 PM

We're still in full summer mode out here; it's 80 degrees at night!!! I'm ready for a little fall/autumn action (I use both). I am in the thick of prepping Halloween costumes that will, of course, be saved for a future blog post. Glad to see that things are back to normal at the ranch!

He's the cute, little thief your parents forgot to warn you about! Love the pictures : )

I live in Indiana but come from Chicago, we call in Fall, and I love the photo of your cat standing up next to the fire, hilarious.

I like cat posts when they're funny like yours. I don't have a cat so have to live vicariously.

We say Autumn over here in the UK. Or just "Bloody hell, it's fecking freezing and we've had no Summer at all. Again."

Here in New England we say fall. But I agree with you, I like the sound of "Autumn". Weather has been crazy, going back and forth from humid and hot to chilly! Love the kitties! I always laugh when they spot something new they haven't seen-then if you move it a bit while they are investigating, they jump all 4 feet straight up in the air. Funny! (Yes, I have 2 girls, old ladies, but the Maine Coon still likes to play and jump really high. And I have to laugh!!!

Kitten Pants is also doing a good job showing off that green chair. Is that the one from the recent estate sale? It's crazy awesome good looking!

This is such a great post. How adorable! I love the last two shots of Mr Kitten Pants. It totally looks like something my cats would do.

oh he is so cute! i love that little curious head with the perked ears! so curious! my cats love the fake fire. they come sit in front of it and stare. They also like jumping up IN the chimney to some kind of hidden ledge. freaks me out!

Ha that is fun!

Oh, there's nothing more entertaining than the playful antics of a kitten! I love fall, too (and sometimes say "autumn," just to mix things up a bit). It gets me in the mood to make new clothes--lots of sewing and knitting plans are swirling around my brain right now. I also love autumn food, like soups and baked goods. Not that I bake. But I enjoy it when others do! :)

OMG those pictures are too funny. I'm having a hard time enjoying fall because I'm so freakin' busy and stressed. And, I'm moving into a house on October 30th, so I won't even really get to enjoy Halloween. I'll just live vicariously through awesome people like you, please and thanks. :)

It's 92 degrees here! 92! 92! Talk about scary. I signed up for the sun and fun, cept I didn't realize the sun part lasts 352 days a year. The only thing worse than having to wear a parka over your fairy princess costume? It being way too hot for all that Halloween costume acetate and poly blends.

Mr. Kitten Pants is a brave Halloween Warrior. To brave the artificial hearth especially, I'm stunned by his pluck.

The Octoman scene reminded me of the scene in "Ed Wood" when Bela Lugosi was supposed to be battling an octopus-- awesome! And the monster in the last scene, Creature from the Haunted Sea? I actually laughed when he popped into view-- he looks like a muppet!

My kitties know how to open dresser drawers and cabinets and are almost now able to open doors. You can imagine the fun we have at our house. We have these rubber rats we bought for Halloween and we have nowhere to hide them! I keep finding them everywhere. They are lucky I love them so much. :)

Great blog! Long time reader, but first time commenting. I love Halloween and my dog does the same thing with decorations. When it rolls to Christmas, she will run past the Christmas tree and try to see if any tinsel falls off. She won't eat it, but will watch it fall in clumps.

Thanks for the fun blog ,photos and video!

First time visitor here...had to laugh at the monster movies. A few weeks ago I accidently came across the Haunted sea monster (must've been searching for something sea related, not monsters) and it cracked me up. Growing up in the 60s these crazy movies were on t.v. and we used to be SO scared...I remember Creature from the Black Lagoon, Godzilla, The Hand...lol.

This was all so adorable. I love my kitties.