Crawling Out From Under

Happy 2013 everyone! I hope that you all had a great holiday season and are now neck-deep in satisfying resolutions and general good tidings!

Yes, I realize that I am a full nine days late in joining in the revelry. Our holiday story here at the ranch started off pretty swell with a flight out to Kansas for a Christmas complete with snow. We'd both been sick in the weeks before Christmas and felt pretty pleased that we were both well in time to see Mister Kitsch's family. The visit went great as his family is awesome, there are always tons of dogs to play with and there is no shortage of great food and conversation. The Mister and I even took a day to drive out to Lawrence, Kansas (one of our dream cities to live in) where we got to meet our friends' adorable babies and do some antiquing. Let me tell you, folks....Kansas and Missouri have THE best antiquing in the world. We got some loot! Believe it or not, everything is still packed from the trip but one little guy made it out into the house - Uncle Jack Mouse. 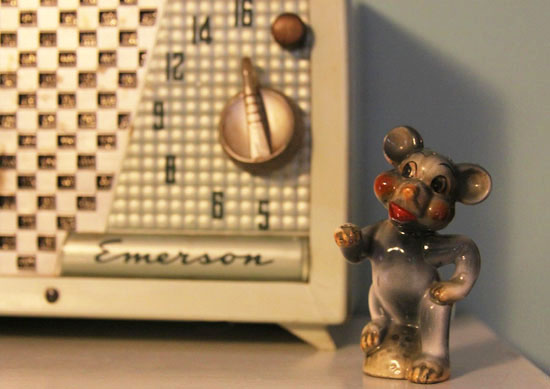 I like how he's got one hand on his hip and looks like he's about to tell the best story on the planet. I've named him Uncle Jack Mouse because of my Great Uncle who used to weave the best yarns (and who kept a hammer and screwdriver under his car seat because he didn't trust his airbag or power-lock windows not to trap him and be his demise in an accident).

Alas, all good vacations have to end. The day after Christmas, I started feeling crappy and by the time we were flying home the next day, it took all that I had to prop myself up and not get pulled by security for looking sweaty and sketchy. Once we got home, the sickness hit the Mister too and well, we've been battling it ever since - nearly two weeks! We must have caught some mega-gonna-get-you-quick virus on the plane. You all know how the air is on those things!

There used to be an air travel sanitizing kit that was sold in the Skymall catalog - and I would always laugh at it because basically, before sitting down at your seat, you'd have to hold up the line of passengers behind you by completing a full-fledged Hazmat style cleanup in your seat's vicinity. I went to try and find a photo of it for you but apparently, the product has been pulled. I did find this in their catalog however: 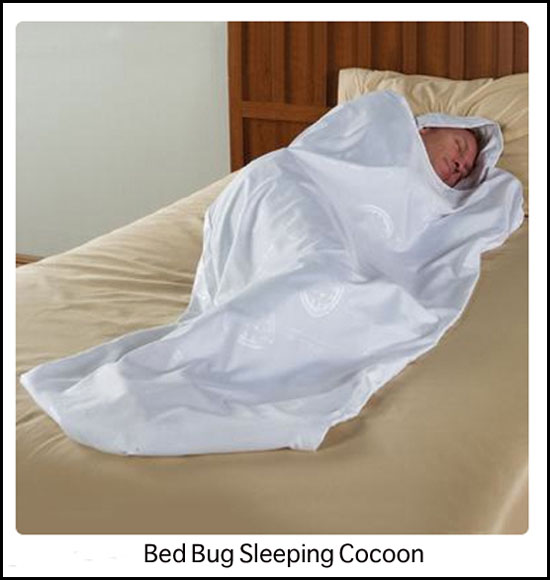 Now, I can see various reasons why this wouldn't completely work against preventing bedbugs - but it does make me giggle to see him all swaddled up like that. I'm the person who always grills the Mister over the phone when he's away on trips with "Have you checked the seams of the mattress?" and "Is your luggage in the tub? Don't lie to me. Is your luggage in the tub? You have no clue what is in the carpeting!" Even if I can restrain myself and leave those out, I can never stop myself from reminding him, "Remember not to sit on the bedspread. Go on ahead and take it off - but don't put it anywhere near the bath tub. That's your safe place."

Yes, it's a wonder that he's still with me - but it's also a wonder that we ever get sick with all of my precautions. We've both been to the doctor and still, this sickness won't pass. I'll woman-up and admit that I've been whimpering and feeling sorry for myself while reading all of your blog posts about parties and good times. And there have been so many posts about how you've already got your entire lives and homes reorganized, replanned and rejuvenated for the new year. Being always the Mother Hen, these posts make me happy for those who post them - but they also make me feel like I was pretty lame in being so proud about getting a shower completed earlier in the day. I think I'm going to give myself a free pass for January as I'm starting to see that it's going to be a long haul!  We had to cancel Christmas with my family and it's been rescheduled for March. We've named it "Marchimus" and unlike the year that we didn't make it home until July, my Mom is taking down her decorations this time so that the church ladies won't talk. That's just the way this year is going to go.

Something good did come from this sickness though. I had an interesting talk with my Mom this week about a story from my baby days. My head is getting all swirly so I'm going back to bed for now - but will share that one with you tomorrow!

Posted by Eartha Kitsch at 1:33 PM

Man, you guys have had more than your share of no-good, very-bad flu like things already for this year!! I'm selfishly excited to see all your Midwestern Midcentury loot, as well as hear your mom story, but I sure hope you and the Mister get to feeling better soon! PS In light of the holiday revelry that you have missed, we need to throw a "Eartha's Not Dead (She's Better Than Ever!)" party especially for you once you're out of the woods this flu season (I almost wrote "flea season", which is hilarious)-- let me know and I'll put it together!

I hope you all feel better soon!

Oh how we have missed you Eartha!!!! Hope you and the Mister get better soon.
Diane
Honey Stop The Car!

Good to know you're still alive and kickin'. Maybe just not too high. And if it makes you feel better, I'm not all organized or anything like that. Just plunking along as usual. Take care--

Yuck! I'm sorry that you're not feeling so hot. I've missed your posts and hope that the rest of the new year finds you healthy and ready for duty!!! Happy New Year!

Oh no, sorry to hear you both are/have been/continue to be so sick! When you come out of the funk, at least you'll have some lovely finds from Kansas to enjoy. Uncle Jack Mouse is adorable! Feel better soon.

Just to make you feel better, I didn't do anything fun for Christmas or New Years because I was sick too! At least when you start the new year feeling terrible, there is no where to go but up! ;)

Lord. I want that sickness cacoon thing! I would wear it at all times- except when leaving the house to avoid looking like john travolta in the boy in the plastic bubble, when he wore that weird hazmat suit to go out into the world. Also, Uncle Jack Mouse is pretty damned adorable...he looks super sassy and kinda like he is in a 60s girl group. I totally get that vibe. Sorry youre sick and I hope you start to feel better!

I've been hearing great stories about all the vintage stuff you can get for cheap at garage sales and estate sales in Missouri, so it must be true. There certainly isn't anything down here in Mississippi that is affordable, which is just ridiculous considering it's such a poor state. Sorry you're ill and hope you'll be on the mend soon.

I'm so sorry you were sick for the holidays! So many people I know were, my poor sister woke up with a 102 degree fever on Christmas Eve, and she was down for the count for a week. Hope you get better soon!

Lord have mercy girl, I hear you on the being sick thing.......I'm just now feeling better and it's been like 3 weeks!!! eek!

100% agree, Kansas and Missouri have the BEST and cheapest kitsch you'll EVER find! I cannot wait to go back......one day! I LOVE your Uncle jack Mouse....completely adorable girl!

Awww, get better soon! Like tomorrow?
Sending good vibrations your way...
Your Uncle Jack is what family is all about. ;) I love to hear about your family. Are you sure yall aren't really Texans?

The Flu sucks! Hope you all feel better soon!

Sorry you and the Mister have been so sick. I have been too...for weeks...and it won't go away, so I can definitely empathize.

We've got to hurry and get well. There's too much great stuff out there just waiting to be bought and blogged about. We don't want everyone to beat us to it!

Am I the only one who wondered how badly I'd hurt myself if I got up in the night to go to the bathroom and forgot I was wearing my anti-bed-bug cocoon? And how would you explain your concussion/broken limb to the ER doc in a way that wouldn't get you committed to the mental hospital? Kate H

happy new year and get well! And thank you--from now on, my luggage is going in the tub. (You may not feel well, but you're still giving out the good tips, Eartha!)

oh man that sucks! i'm so sorry! those lingering sicknesses are the worse. i always start to wonder "will this be the end of me???" in melodramatic fashion.
i hope you guys feel better soon!

Hands down they do! Farmers and Midwesterner's KEEP EVERYTHING! My family goes to Lawrence KS to stay with my aunt and uncle for a week between Christmas day and New years. I've been going and buying antiques and junk since before I could walk!