Just When We Thought That Birds Couldn't Get Any Cooler

So yes, it's been established that I'm all atwitter for birds...but know what makes me even happier? Bird records! I wanted to show you a bit of our collection here at the ranch.

The first record is from the "teach your bird to talk" genre which I am admittedly wild about. It's from Hartz Mountain products (Hartz is still going strong today) and promises that your bird can teach itself to talk just by listening! 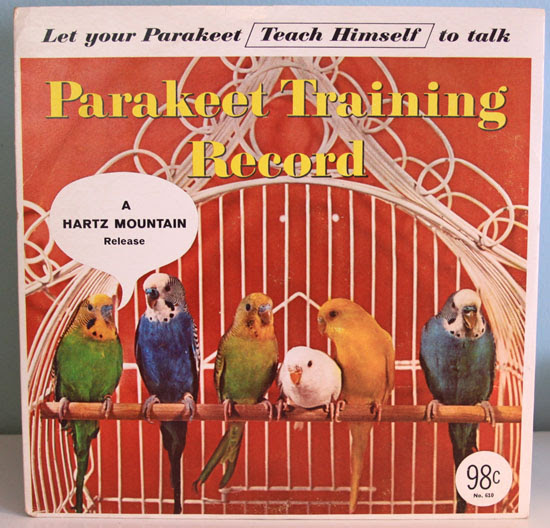 The record suggests "Use repeat mechanism if your phonograph is so equipped. By giving
your bird a 'lesson' several times each day, you will soon be rewarded by hearing him repeat the words and phrases he has heard so often.." 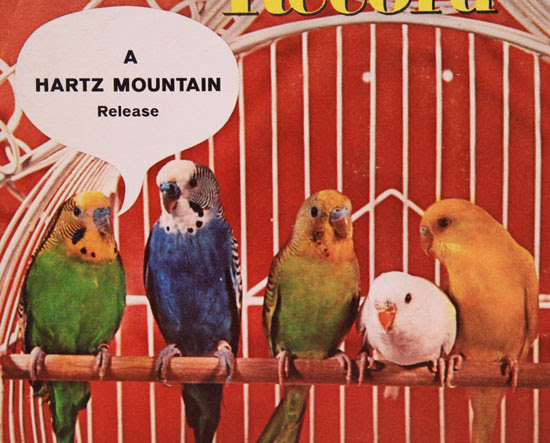 Look at those beautiful parakeets! Looks like one of them is talking already! 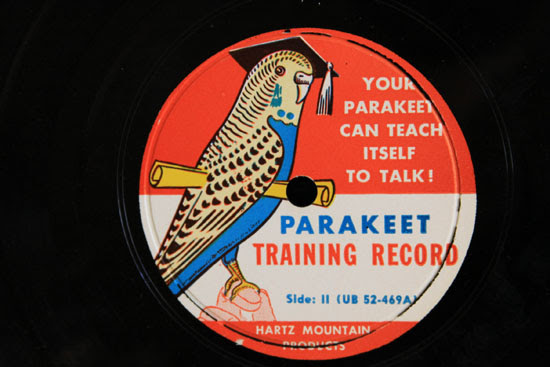 And look at this guy! He's done up and graduated!
Next up, Singing Canaries! 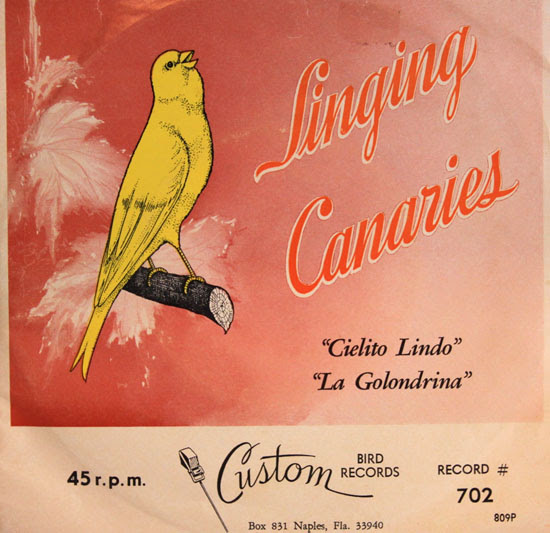 This section of the genre is super fun to me because it's about birds singing along with music. The text on the back of the record reads:  " When Custom Recording Studios released a record entitled TRAINING YOUR PARRAKEET TO TALK, it became an immediate hit and sales boomed. Featuring the recorded voice of an amazing  parrakeet named 'Peter Parker' and the training voice of Peters owner; the record was received with enthusiastic response and distribution soon mushroomed from coast to coast. In time there were many requests for a record with singing canaries. Blended with the wonderful canary songs is the rich pipe organ music of Hal Pearl, recorded at the world famous Aragon Ballroom, Chicago, Ill."

Wow! Sounds like the masses went wild for birds! Who can blame them really? And I looked up the Aragon Ballroom - amazingly swanky!  It was built to resemble a Spanish courtyard complete with palm trees, terracotta ceiling and mosaics - and the ceiling contained twinkling lights to make dancers feel like they were under the stars of a beautiful night sky!  It was constructed to hold nearly eight thousand people and visitors reached the ballroom by walking up a grand carpeted staircase surrounded by huge plaster dragons. I'm sure that Peter Parker probably recorded his portion of the record from the cozy confines of a recording studio but it's fun to think of the fabulous Hal Pearl in that grand ballroom, recording his pipe organ portion, knowing that the parakeet would be joining in on the recording. Click here for some photos and info on the famous Mr. Pearl. Looks like the ladies loved him and his "mighty Wurlitzer"! 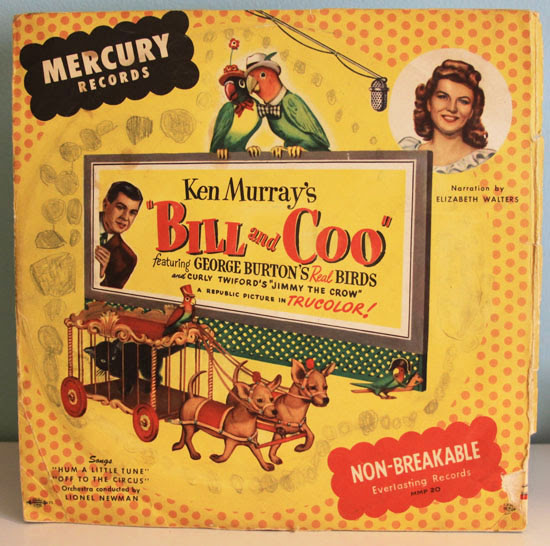 This record was put out in association with Bill and Coo, a truly mesmerizing movie released in 1947 about a town full of birds called Chirpendale. It features an amazing cast of birds trained by George Burton as well as superstar, Jimmy The Crow whose trainer was Curly Twiford. Here is a synopsis from IMDB:

Welcome to Chirpendale. There's plenty of parking space, plus it has everything: a bar where bird citizens can drink junebug sundaes and listen to jazzy music. But the bird citizens are terrorized by an evil raven called "The Black Menace", but a pluck young bird named Bill Singer, who's a taxi driver by day, comes to the aid of a damsel in distress, Coo, who's trapped in a fire. And soon the circus comes to town, Bill and Coo get box perches and witness ferocious feats and even laugh along with Cannonball Twitcher on an out of control motorcycle! But soon The Black Menace returns, and Bill and the rest of the citizens put together a plan to put him away for good.

Here's a little taste of Bill and Coo. You are not going to believe this town :


Squeal! I'm moving there and you can't stop me.

Now back to the record ( if you can stop thinking about that glorious film because I know
that I certainly can't ). Here is the back: 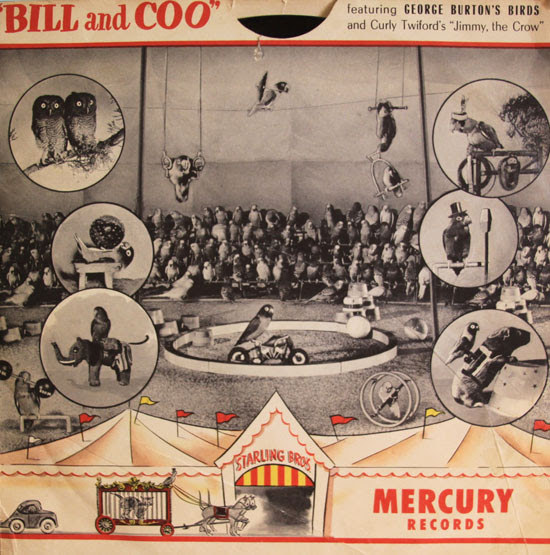 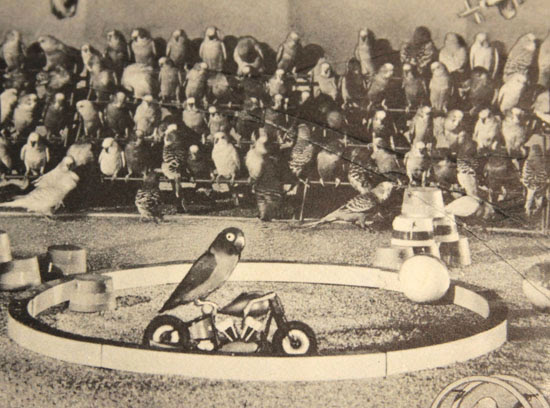 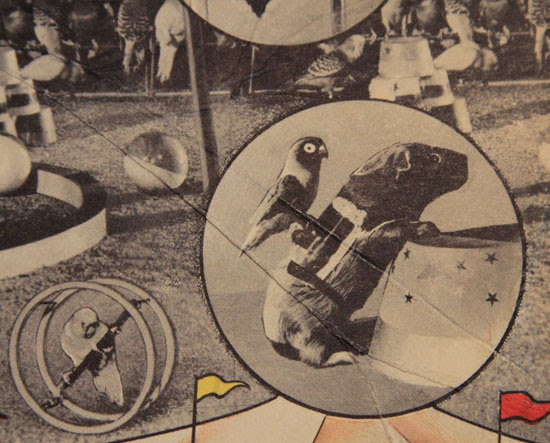 And your eyes do not deceive you. That is indeed a guinea pig! 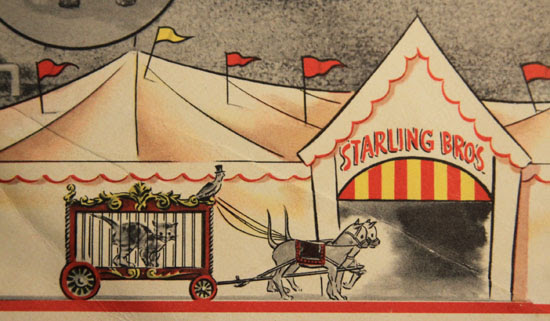 Who needs wild lions and tigers? A kitty cat will do!

I hope that you've enjoyed the show and tell! Tomorrow, I'll play some of the records for you!

And if you want to see lots more (Trust me - you do. You'll be giggling like a little kid) here is the entire movie for your enjoyment!: Bill and Coo

Until next time (Every little swallow, every chick-a-dee, every little bird in the tall oak tree)
x's and o's,
Eartha
Posted by Eartha Kitsch at 11:50 AM

I'm actually a little depressed after watching Bill and Coo because it was so wonderful and I want to move to Chirpendale right away! But I''m just a big ol' person and not a cute little birdie! WAH!

OK. My friend had a guinea pig and all that thing ever did was sit in woodchips and whooh.) I don't know what you call guinea pig talk, guinea pig latin or something, but it just sat, chewed and made this whoohing sound. And that was it. No carting a circus parrot around, nothing. We were sold a bill of goods, obviously, in that we were taught not to expect much from any animal smaller than a loaf of Wonder Bread. If we had known what magic could be created with our hamsters, cats, guinea pigs and parakeets, what heights we could have climbed. The magic of my childhood had been downgraded a peg. But at least, now I know about the incandescent world of Bill, Coo, and Curly Twiford. For this, Eartha, I am greatfull.

Hey, I've been to the Aragon! We used to go there to see bands when I lived in Chicago in the 90s.

Chirpendale - Adorable and I am SO moving there too!!!

I recognize that cat in the cart!!! :D

Where DO you find these things? How cool is this post???

How the...what the....Chirpendale?!?!?! How the heck did they train all those birds to do so many wild things? The scene with the hatchlings was kinda gross...baby birds are NOT CUTE. No sir. Other than that, I was awed!

The Wrong Brothers, a hoot and two snorts, you have out done yourself Miss Eartha! The doggies pulling the circus wagon on the cover look like Lani :)

Chirpendale is simply the best town ever! I can't wait to hear your records!!

I'm more of a cat person, but chirpendale is so freakin' cute!

oh wow, i think i need to see that movie! and i wish i would have had those records when my roomie in college bought some lil birdies. she would have been shocked to come home and hear them talking!

I had a parakeet named Jumbo in grade school and one named Xevious when I was in jr high,he was named after THE hot arcade game of that minute. I'm very familiar with the world of Hartz products!