This weekend, I got my dream typewriter. Well, the Mister got it for me. Being the mighty hunter that he is, he nabbed it from an estate sale. It's from the 60's and is from the Italian maker, Olivetti. 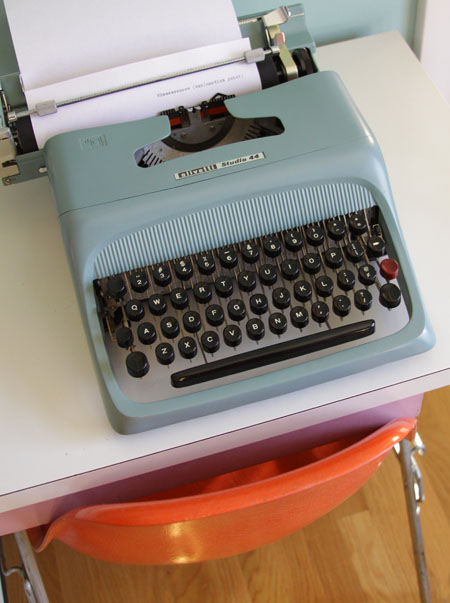 It's clean as a whistle. The case was completely decrepit but the typewriter is pristine. Score one for the fast moving Mister! I showed him a photo of it sitting under a table all forlorn in the sale ad. Like my own personal shopper, he went quick like a bunny and brought that baby home.

I like to think of him fighting off hipsters as he makes his way to the lady with the cash box. Cries of "But..we were going to sell it on Etsy!" trailing behind him.

Since it's older, it doesn't have a key for an exclamation point. 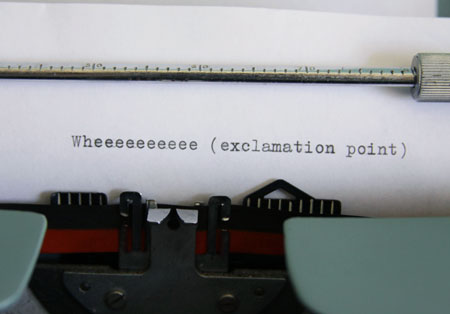 Did you know that most typewriters didn't have those until the 1970's? True. I mean, true!

Being the overenthusiastic writer that I am, I use exclamation points a lot. My understanding is that before typewriters had them, an exclamation point was made by typing a period and then backspacing and adding an apostrophe over the period.

Until next time (the quick brown fox jumps over the lazy dog!!!)
x's and o's,
Eartha
Posted by Eartha Kitsch at 2:52 PM

OOOoooo! I have an Olivetti Lettera 22 and I love it. It's purely a tactile, pushing buttons thing. Mine also is sans an exclamation point, which means I have to sober up a bit on the typewriter. I mostly use it for writing dirty haikus anyways.

Haaa! I think I'm going to use mine mostly for ransom notes.

There is something about a typewriter. It's more work or something. One doesn't sit down in front of one unless what comes out is gonna be worth it.

I would be lost without exclamation points! and that's a gorgeous typewriter!

It's a beauty, and I always laugh at my own jokes. That's how I know they're funny, damn it!

Gasp! That is gorgeous. I remember learning to type on a typewriter my dad had when he was young - sans exclamation point. Had forgotten that. Enjoy your wonderful find!

Woot! I love typewriters but sadly don't use mine enough. I have a portable Brother similar to yours and Smith Corona desktop. Another thing older ones are often missing is a zero key; you just used a capital O :)

beautiful! a friend of mine is looking for a cute working type writer so i would have snatched that up if i had seen it. and i don't think i could live without exclamation points!

and I saw yesterday on The Great Race that one of the things they had to do to get a clue was type a short note with an ancient Underwood. And yes all old typewriters also had no number 1

which was made with the lower case l