In keeping with the theme of yesterday's post, today I'd like to show you another Santa from my collection. 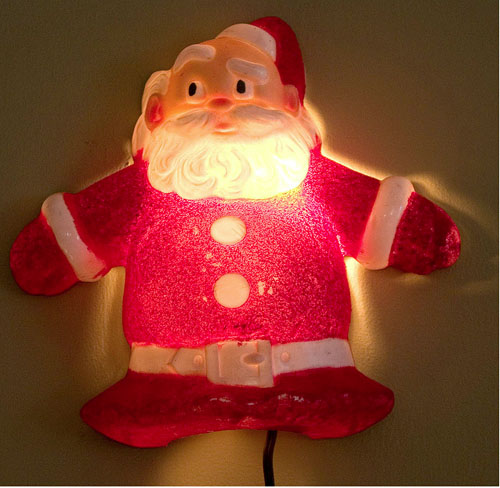 Whoa Nellie!
Since there's just so much to think about here, we'll not get bogged down in the fact that he has no legs. We'll just focus on his face. That face that brings to mind someone who is getting a way too personal pat-down from airport security.

Or perhaps a man who is trapped on the tiny ledge of a skyscraper and is inching slowly towards an open window. Both things that you never think about Santa being involved in.


And once again, just like yesterday's Santa, the box is pretty deceptive: 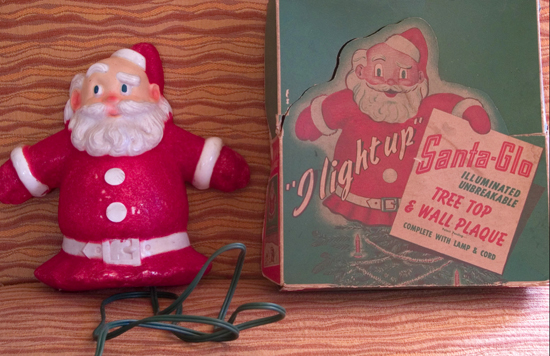 On the left: Police Lineup Santa
On the right: Santa Glo

That said, he's also nothing like the advertisement from the Sears catalog either:

I remember watching this Western once where the bad guys (yes, I said "bad guys" like an eight year old) tied up a man in the middle of the desert to torture him until he slowly died from baking in the sun. That's what this illustration reminds me of. Picture rope around his wrists and men in black hats snarling through chewing tobacco stained teeth..

Until next time,
x's and o's,
Eartha
Posted by Eartha Kitsch at 6:16 PM

Poor Santa - he looks like he's plastered against the wall trying to blend in. Maybe that's how he follows people.

That's so sad - a leg-less Santa, how will he ever be able to make it to my house now???

OMG, where do you find these ermmm... treasures! I'm gonna have to refer back to you for all my Creepy Santa posts, because here in Little Rock creepy Christmas is surprisingly hard to come by! He DOES look concerned doesn't he?! Maybe he doesn't know where his legs went (true story about a poor elderly patient I know of... but that's for another time).

you know, i was in an antique store the other day (big surprise here, i know) and you know what they had on a tiny blow mold santa?? like... a 12 incher.... get ready.... FIFTY EIGHT BUKCKEROOS!!!!!!!! i about collapsed right there.

He looks like he's popping out of the chimney top. Perhaps that was the designer's intention when he was created?

i like to think that he just has tiny little feet at the bottom. i love those shifty eyes.

Got a good laugh out of the box-to-contents comparison, and then you found the catalog spot too! Is truth in advertising dead..!! I love how, as you said, there's the one expression on the box (piquant, knowingly impish expression) and the one on the actual figure's face (self-doubting consternation). Brilliant. Keep the Santa posts coming!

I have soo enjoyed browsing your posts. (via No Pattern Required)I'm posting your blog on my side-bar as a new fave.:)..this Santa made me laugh. Reminds me of Stinky Pete from Toy Story..:D