In the Kitchen With Eartha

They did it! Those guys that I wouldn't trust to tie my shoes actually got the appliances into our house and nothing was destroyed. Three cheers!

We now have a kitchen. Three hundred cheers! Here are some photos of how it looks now. 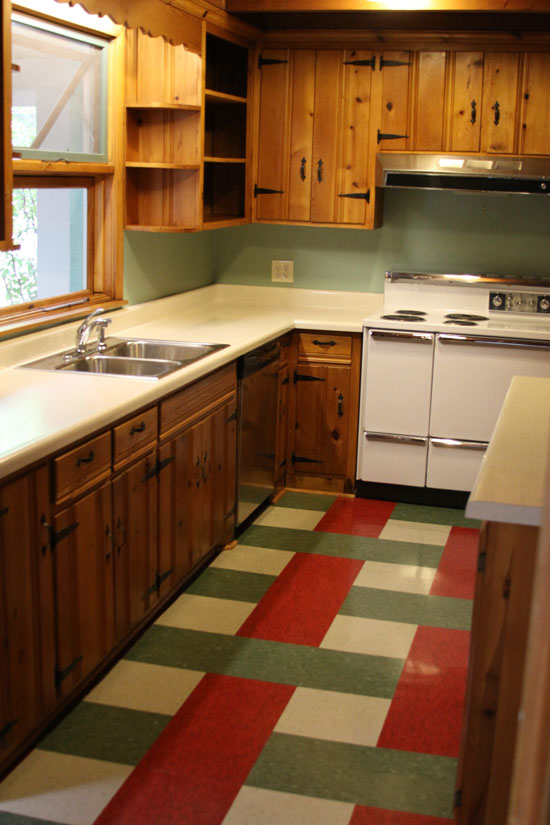 We went with a basket weave pattern that I saw in an old illustration somewhere. It's sort of Christmas-y but I love green and red with wood. The shoe molding looks strange in this photo but I swear that the whole kitchen has it. 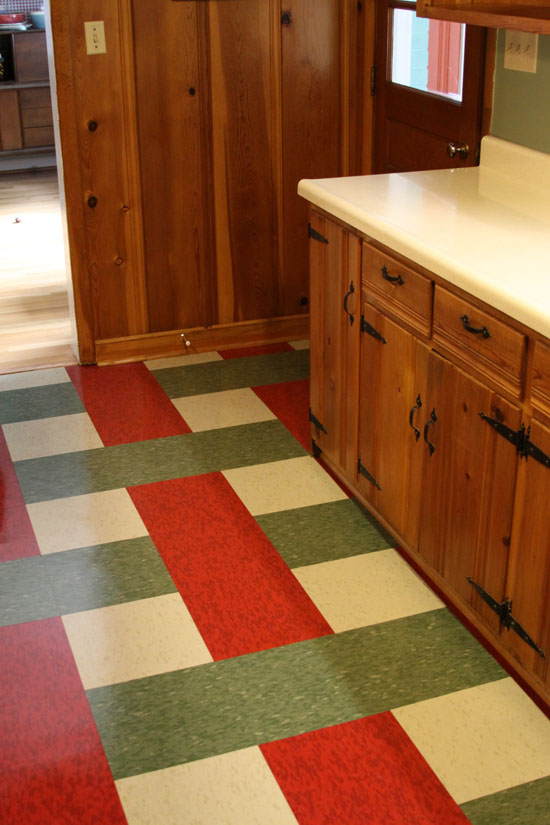 The floor is super shiny right now and I'll be glad when the finish goes down some and it looks more aged. Which should take about a week with four cats. It was so funny because when we let the kitties back into the kitchen for the first time, Mishka wouldn't walk on the beige squares. It seemed like she thought she was going to fall into oblivion or something!

Here is a tray that I found at an estate sale this morning. I think that it will look great hung above the stove to help bring the red in more. 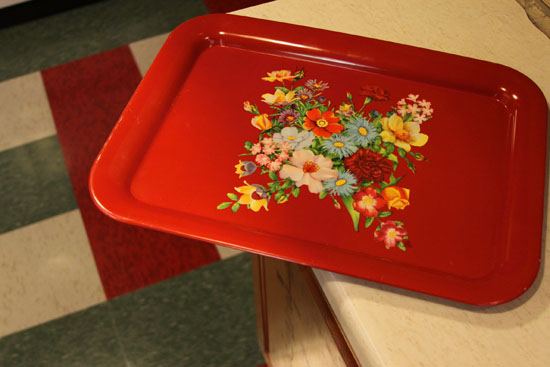 Since the job took so long, Mr. Kitten Pants grew from a kitten into well, Mr. Cat Pants. I am now having to teach him not to climb on the counters (uggh) OR do this new trick: 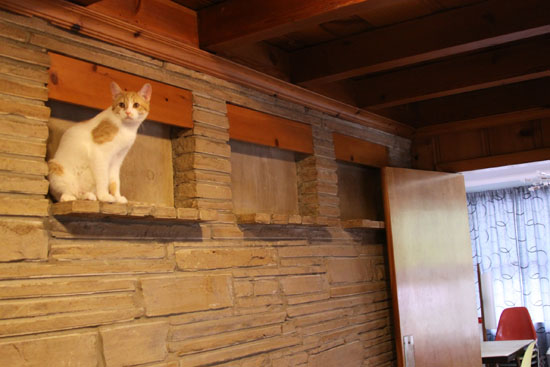 These are the lighted niches that are waaaay up next to the ceiling. He gets up there and screams for help. It's kind of hilarious but at the same time, I draw the line at having cats climbing all over my kitchen like mountain goats. I do need a little cat free zone from time to time.

Was the job perfect? Not so much. Are there things about what they did that we'd change? Definitely. In the end, we decided that we live in a fifty six year old house and well, things are going to be jacked up sometimes. Even new things. But we're satisfied with it for the most part and decided that as long as it was near perfect, we were going to put a lid on it.

For those of you who have been following the progress (and lack thereof) of the kitchen, do know that the Mister and I have big plans to raise a ruckus to everyone that we can think of about how we were treated by the construction company and their subcontractors. We've taken detailed notes and photos throughout this whole process and we're not going to let it slide. We hope that by doing so, maybe we will save other families from having to live through what we lived through. Did I tell y'all that I thought that I was having a heart attack the other night? It was totally, totally, TOTALLY stress but for a few fleeting moments I thought, "This kitchen is going to kill me. I'm going to die because of a KITCHEN!". Well after thinking that I wasn't wearing a bra and that I didn't want to be hauled away to the slab that way.

I'm too exhausted to start unpacking boxes but I'm sure it will happen this weekend. Tonight, I'm going to make my first meal in the new kitchen. It's only going to be taco soup - which means I will dump a bunch of cans into a pot - but since a pot is about the only thing that I can find right now, I think it will be perfect!

I hope that you all have fun weekend plans. Here in Tennessee, we're getting brief glimpses of the upcoming Fall weather and it's almost blanket temperature at night. Good, good times.

Until next time,
x's and o's,
Eartha
Posted by Eartha Kitsch at 1:20 PM

Ok, first of all, that basket weave pattern is awesome! And second, 3 cheers for an intact kitchen! :D

Oh I was hoping this is the "hoorah, we have a kitchen again!" post after your hopeful last one. YAY!! And it looks gorgeous. Congrats on persevering and not exploding from sheer frustration and anger and the incredulity of it all!

What a gorgeous kitchen, I love the colors & pattern you chose for your new floor! I know all about exploding houses & wish you nothing but smooth sailing from now on :)

hooray! I'm so happy that you finally have your kitchen back!!! the floor looks great! Post a picture when you get it set up again!
and i love that tray. i thought about getting one too, but couldn't think of a good place for it!

EXCELLENT news!! So happy for you guys! And wow, that floor, AH-MAZING! Love love love the basketweave pattern and the color choice!

The kitchen looks fantastic! I'm so glad you were able to cook in it last night and not have to was dishes in the bathtub.

I don't blame you for telling your story to everyone who will listen though. The treatment you got and the horrible workmanship of that first round of knuckleheads was deplorable.

Yeah!! I've been reading your harrowing kitchen saga, and I'm so happy that it has a happy ending. Your kitchen looks utterly FANTASTIC! Wow! And who knew floor tiling could be so adorable?

Very happy for you that your kitchen is now DONE!! I love the floor, color and style...I think red and green totally compliments the beautiful wood cabinetry. Enjoy your new kitchen! (Had to laugh at Mr Cat Pants up in the nook! My friend has a Siamese that likes to crawl all over everything and get up high, too. Naughty kitties!! LOL) Ya gotta love 'em!!

That floor pattern is beyond fabulous! I love your kitchen so much! xoxo

Hip Hip Hooray for you two. You guys made it through the sh@#t storm and came out clean on the other side!

my house is cuter than yours said...

that floor is gorgeous!!!

The floor turned out beautifully and goes so well with the wood in your kitchen! SO nice! AND I LOVE your stove! What kind and year is it???
Congratulations on surviving your nerve-wracking kitchen re-model...or shall we say...deconstruction and reconstruction! Up from the rubble!

kudos for the kitchen! And add me to the floor's fan club :)

Your kitchen looks super cute! That cat story reminded me of when my roommates and I had an extra bunk bed in our hallway and the kitties would get stuck on the top all the time. I think they do it on purpose :)

Hoorah!! I'm so happy everything is finally working out. And I laughed a little too hard at that mountain goat quip. Congrats...it looks great!

Oh my gosh.......SO gorgeous!!! I am SO totally happy for you that this entire mess is FINALLY over with! Everything looks completely awesome!

And yes, we can tell fall is finally arriving here too..even though the temps are still in the high 90s! I'll take anything at this point though because I am so ready to be done with summer!!!

It looks fabulous and I'm so glad it's done!!!

It looks gorgeous. I too love the red and green with the wood cabinets. So glad to hear your hell is finally over.

Your floor looks really great; what a neat pattern! Have fun unpacking!

It looks beautiful, and I'm so happy for you!

Eartha, the kitchen looks wonderful, and I love the green and red tiles and the basketweave pattern!

hallelujah!!! i hope life goes back to normal soon for you! i'm so glad you can re-gain your sanity now!! :)

Wow, that floor looks amazing! Three cheers to having a kitchen again!

It looks beautiful!! I LOVE the floor pattern and colors. You're right - it compliments the naughty pine very well. So glad this nightmare is coming to an end for you!

Oh, I missed this one earlier. I am SO happy for you! Love the basket weave, and that tray will look awesome in there. And I've had the stress heart attack--3 days before we moved into our house. Cane made me go to the ER, and let me tell you: When you're in your 40s and present with those symptoms, you don't have to wait around for hours. So glad the kitchen didn't kill you. :-)

Hoorah for your kitchen! I'm so glad for you, the mister and the kitties. Let's hope you have some time to enjoy it now!

Love the floor that pattern is Marvelous!!! glad you can finally move back in.