Hey buckaroos! How the heck have you been? I hope that things have been great there on the other side of the screen.

We're still in a swirling twister of chaos here at the ranch. Still no kitchen. We came *this* close though! Oh, those were the days. The VCT tiles were ripped up and started over by a guy who actually knew what he was doing. I fought the urge to kidnap him and keep him in a cage in my garage. It's funny how the mind goes crazy when you're so used to having horrible workers in your house. After so long with those who wouldn't know their arses from an axe handle, you get one good one and you find your mind twisting and suddenly, you're someone that you don't recognize... someone who could easily be true crime novel fodder!  I've spent a lot of time thinking about how I could torture the bad ones, capture the good ones and well, what foods I could stress eat next.

On a related note, I know that several of you have mentioned that we should contact Mike Holmes from the HGTV show "Holmes on Homes". The other day while waiting for seven hours for our floor finishers to come back (ha! ha! HA!!) , I watched a marathon of episodes from the show. I found myself actually cheering out loud with every horrible mess removed and at the verge of tears with every repair made. It seemed like a beautiful fantasy world. Speaking of fantasies, I have one where there is a corresponding show where Mike gets to meet the people who did the original bungled construction and repairs and erroneous inspections on those poor houses. And he gets to rub their faces in the black mold and busted sewage pipes until they cry like little bitty babies.

Look at him. He's like a modern woman's Gary Cooper.
I could watch him storm through houses and rip out drywall for hours!
Hercules! Hercules!

So, where were we? Anywaaaaay, the guy did a great VCT job. Three cheers! Then these other guys came out to put the coating on the floor. When they were done, we weren't able to walk on it for 24 hours - but when we did, we saw what a mess they'd made. There were areas with no coating at all. Not a lick. And the total clincher - they had somehow managed to encase hair in the layers of wax! Okay, so random hair freaks me out. I don't like to see hair that isn't firmly in scalps. Especially hair that I don't know who it belongs to. It's just a thing. I don't like random rogue hairs. And now they're encased in my floor like nerve-frazzling fossils! I'll spare you the details but do know that I finally got to tell my jerk sexist Contractor what I've been thinking about him all of these weeks and it was great! The first of next week, the floor is going to be stripped and hopefully, done right this time. I know you're on the edge of your seats! (or at least ready for me to stop talking about it)

Okay, so while this floor thing has been going on, I've been collecting bits and pieces of things that I wanted to talk to you about:

Doesn't it look like some poor lizard met an awful, awful fate?
Got his head stuck in a Dixie cup and never saw his Mama again. 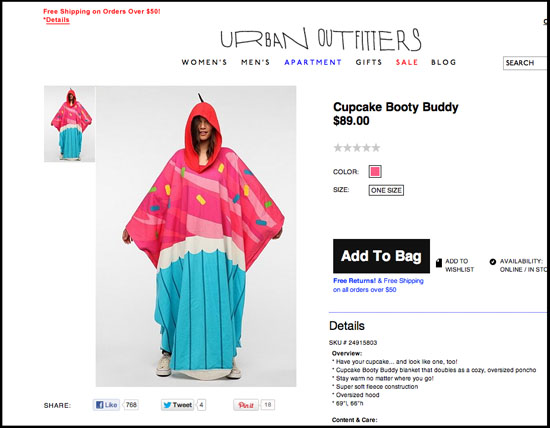 Baaah! I don't know what makes me laugh more: That it's called the "Cupcake Booty Buddy" or that it costs eighty nine bucks - and since there are so many people who believe that everything that Urban Outfitters churns out is true genius, there are probably people cuddled up in Cupcake Booty Buddies right this very moment! According to the text, it can also double as a poncho. For those days when you want to walk the streets or go to a sporting event looking like a cupcake.

This Commercial:  I couldn't help but think of this after that last one.


Facebook Profile Photos: I've been collecting these for a while and since Facebook made that change where you see the photos of everyone who has commented in a group, I've been able to get some real doozies. These are my favorites because of the way that Facebook randomly groups them. Keep in mind that the photos that are put side by side are usually of people who don't even know each other. It's like a slot machine of unlimited giggles for me.

The best part about that last one is that the lady on the left had that photo as her profile shot while she was asking if anyone knew of any good teaching jobs!

Okay, I've rambled on enough but I feel so much lighter getting the above out of my "Share With The Buckaroos" folder!

Posted by Eartha Kitsch at 2:38 PM

Here's hoping and praying that you can get that floor resolved and FINALLY get your kitchen back!!!!

Wait, what.....a secret behind HH??? Do I really want to know the horrible secret reality behind House Hunters too, or should I just stay in my blissful ignorance???

I agree with you, Mike Holmes can come rip out my drywall anytime. Say Yes to the Dress, what is the draw with that show? It sucks me in everytime. What's with the women that bring their fiances "because they have great fashion sense"?? That Kimmel video has me tearing up in laughter. I'm sure the rest of the country is convinced that we southerner's are all total hicks.
xo, suzy

I can't stop giggling! It amazes me that you can find silly humor in stuff, even though you are going through such a trauma! The lizard sconce!! Be a cupcake!! And I DID see that stupid commercial. Certainly NOT from the MADMEN team!!
I think you SHOULD write to Holmes' show and maybe he'll come out and fix all of the nasty boo boos!!!! Now THAT will be a blog.......
Thanks for the laughs!!!!

Mike Holmes is such a superhero, isn't he? My mother-in-law is obsessed with him! For a long time I couldn't remember his name, and I just referred to him as "that guy who tears down houses WITH HIS BARE HANDS!!!"

Oh lord, I'm with you on the random hair thing, erk. Loving the lizard cupcakery Faceache stuff though. I've found a jacket and a scarf you might appreciate...

Wait...there's a Mike Holmes show I've never seen? What is the name of the show where he gets to rub their noses in it?? I NEED to see that show!

Maybe if we offer him sexual favors, he'll fix both our houses!!!

Oh my gosh will the insanity every end. You guys have been put through the ringer. It's good that you stay on top of these idiots and get r done right! P.S. Holmes on Homes is awesome.

Lord, the ongoing floor thing...the hair in the floor would drive me INSANE. They'll get it fixed though! Even if it has to be on the eighty-second try...bless you guys' hearts. On the lighter side, "Got his head stuck in a Dixie cup and never saw his Mama again" just made me laugh outloud. Keep your chin up! This Thursday estate sale is coming! :)

My husband is a Mike Holmes clone with guns ALMOST as big and he has a major mancrush on Mike (maybe it's because they have the same first name?). Since it's either "Holmes on Homes" or The Military Channel when hubby has control of the remote, I've been watching a lot of contractor horror stories and yours TOTALLY sounds like something Big Guns would enjoy! Since you're in Tennessee, I'm not surprised to hear that you have a sexist contractor--I think being sexist is part of the job requirement if you're Southern and in the home f**k-up business.