Building Stuff! and Cooking With Cereal!


The Mister and I were strolling through an antique store over two years ago and the potential findings were pretty bleak. The pickings had already been picked - and we were finding nothing. We were towards the end of the huge store when  I looked up towards the ceiling - and what did I see? 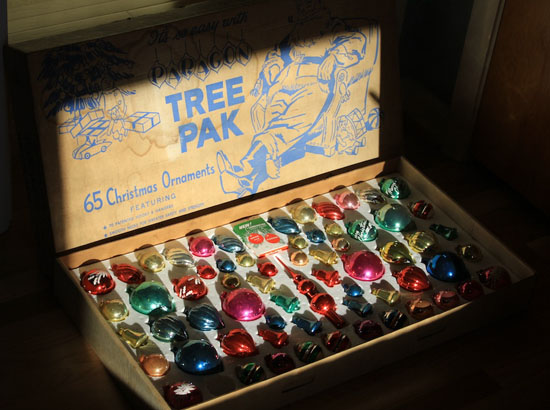 A big ole Paragon Tree Pak from back in the day - complete with tree topper and ornament hooks! You should have seen the store's lights bouncing off of those ornaments! Glory day!  I started squeal-speaking in the sort of incoherent gasping gibberish that is only reserved for the "oh my god, I have never seen this in my life!" kind of finds. Mister Kitsch had kept walking but after hearing the ruckus, stepped back (probably in deep trepidation) to see what I was making such a fuss over.

The sad part was that it was just after Christmas and I was dead broke - and this thing was remarkably out of my usual price range for "fun" items.  I don't remember exactly what all ensued but I do recall making all sorts of deals with the Mister about how I'd pay our bank account back if he'd let me get it. A few minutes later, a store clerk was climbing up high into the rafters and bringing it down. I remember hiding my face with my hands as she did, completely terrified that those ornaments were going to spring out of their packaging, straight to their deaths on the concrete floor.

Luckily, the whole shebang came down and out of the store intact. But that was two years ago. Since then, it's been hidden away in a closet. We finally got off of our duffs a couple of weekends ago and started the process towards getting it on display. We figured that a glass shadowbox would be the best option and off we went! Well, off the Mister went! I don't claim to be able to cut a straight line with anything so it was he who used the power tools.

Luckily, the place where he works has a complete shop so we were able to go there and use all of the equipment.  I went with him to cheer him on and to oversee the process (which I'm quite good at).


Here he is cutting the notches for the glass to sit into in the frame. 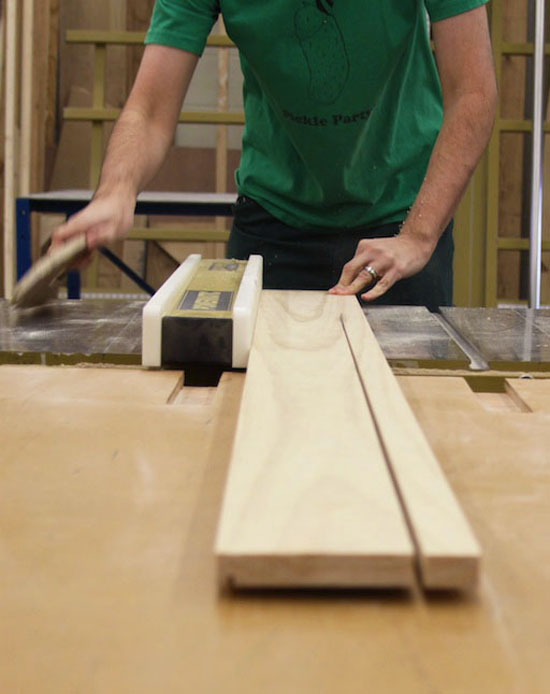 Note: Knowing what a worry-wart I am, can you even imagine having to be in a wood shop with me?

Here you can see how the ornaments are in their box. They were snug in their original packaging so we just left them there and put that inside of the frame. One of the ornaments was missing when we bought the set but luckily, I had a matching ornament in my own Christmas stash to fill in that spot. 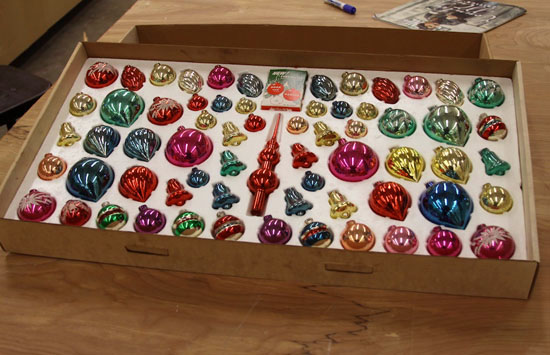 Here is the Mister many steps later.
The box has been completed and he is now measuring things up for the glass. 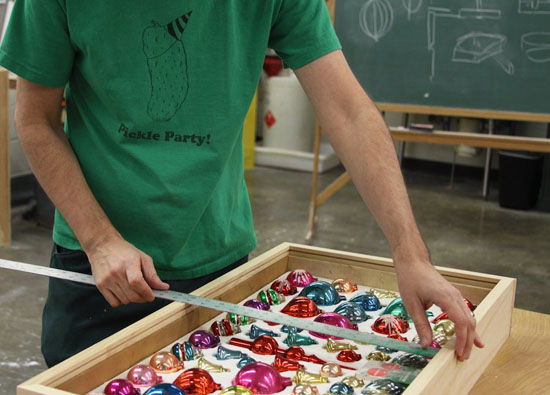 While he was slaving away, I made this intro board in case we ever decided to give him his own feature on Ranch Dressing. 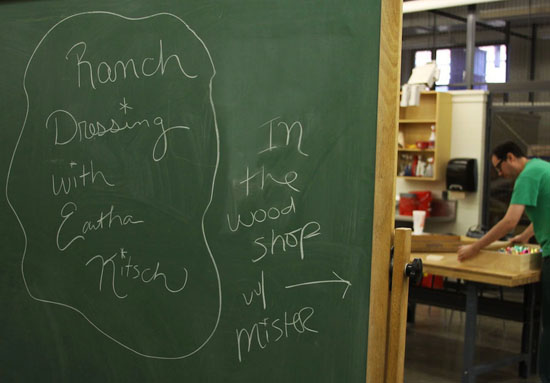 ...which he says will never happen because he hates when I show him on the internet. 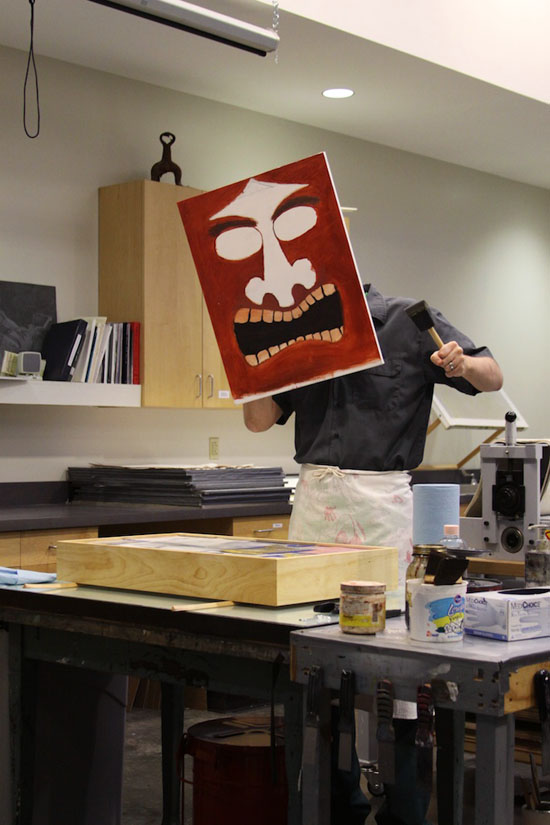 Here he is incognito staining the frame.

After lots of slaving away on his part (and agreeing that things were going great on mine), the shadow box was finished this week. We decided to hang it in the dining room where the sun can bounce off of the ornaments for a little razzle-dazzle. 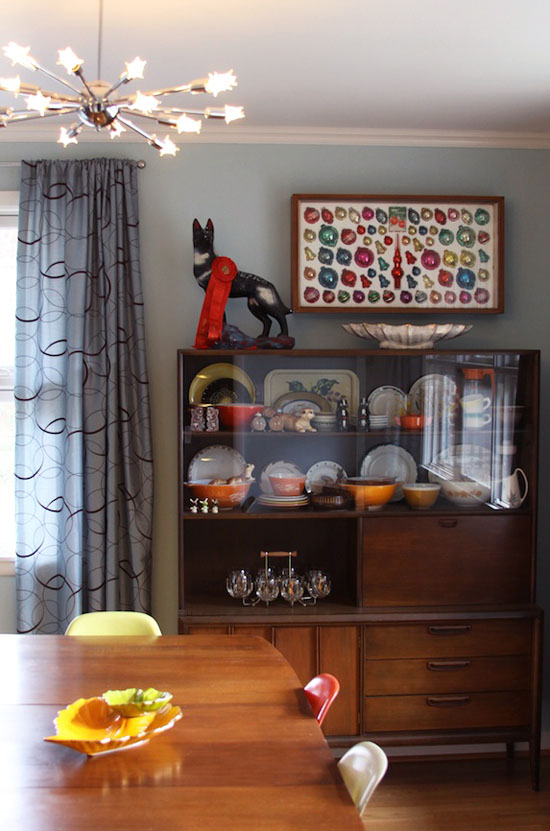 I think it's pretty cool and it's fun to finally be able to see the ornaments instead of just shoving their box out of the way whenever I went to excavate something out of my closet. It does clash a little with my china cabinet contents which are still in their Fall theme from October - um, yeah....boy, am I behind! But if you think about it, I'm now actually a little ahead since Christmas is represented there too! 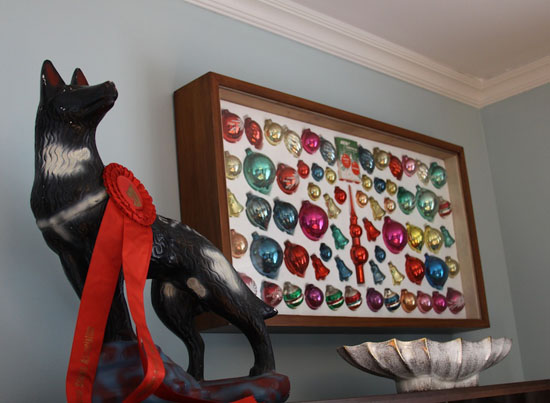 Have you built anything lately? If so, do tell! Are you nuts for the power tools? Any seasonal projects that you've been putting off so long that holidays have merged into a great big blur? Do tell about those too!

Oh! And on a pleased-as-party-punch note, Brian at Caker Cooking is featuring a recipe that I submitted today. I'm not going to give away the details but I can tell you that it came from this intriguing cookbook - and seriously, what's better than love and cereal? 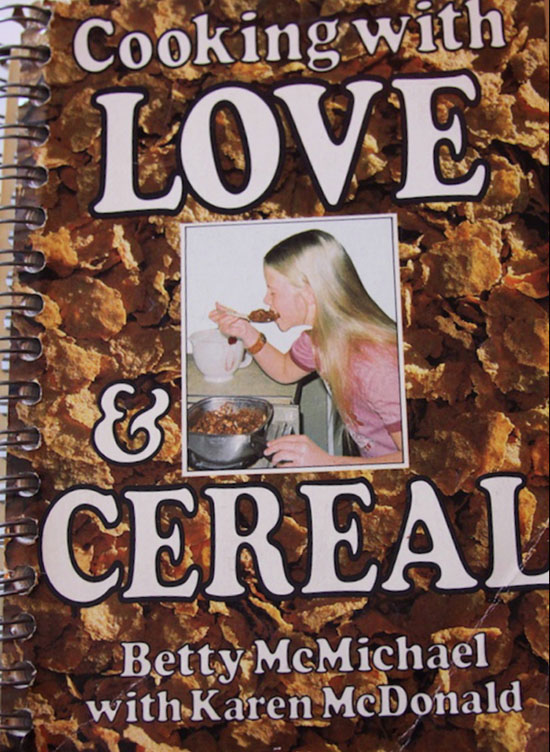 Click here to go see. Brian always tickles me to death with his writing and let me tell you - he comes up with some great recipes! February is reader submission month at Caker Cooking so color me intrigued by what's about to ensue....

it turned out SO WELL! I love it! and i love seeing more of your dining room!!! and your hutch! i still don't have mine in our house yet, but at least it's in our garage - that's better than it being in louisville!!

I do a LOT of waving my hands around and making gibberish noises when I see something I want at the thrift/antique store.

I love the display case, so you can see them year round.

wow! that looks so great! i would never have thought of displaying it like that, but it's perfect! and lucky you that mr. kitsch knew how to make it for you!
also, the idea of you in the woodshop is pretty hilarious. i can just see your face every time he is cutting some wood.

what a great idea! my mom got me something similar for our first married x-mas. it's a wooden box filled with tiny glass ornament, and it came with a see through piece with a drawing of each ornament so I know where each one fits.

What a cool project! It never would have occurred to me to make a shadow box for them. Smart thinkin'!

Wow! That is such a great idea! Now you can enjoy them year round!

I really really love how that looks! You have a very talented husband!

I want to come eat something in your dining room! Anything, really. Love your ornament set. Isn't it nice to have a handy mister? I vote for the new series. :-)

WOW! That is seriously the coolest thing ever. You combined my love of vintage ornaments, old packaging/graphics and shadowboxes (I do love a shadowbox!) into one awesome piece of wall art.

How beautiful! I love your dining room, it is so pretty. I had wood shop in high school, many, many, moons ago-and I loved working with all the big power tools. That is great your husband has access to those, and is so talented!

I LOVE IT!!! Christmas everyday of the year! For some reason I understand clothing construction; beyond that, however, I am so spatially challenged. All of those SAT test questions where you're supposed to know how things fit together or what they would look like rotated 234 degrees are beyond my comprehension....also I'm pretty afraid of any power tool more powerful than an electric screwdriver.

Love your Tree Pak AND your recipe! Tell Mister Kitsch that his scary incognito face made me say, "Eeek!"

What a cool thing to do! It looks really nice! You gals crack me up, your love for past styles, I am so glad that you do! Your dining room is lovely! My mom would be so proud of you too, that was her era!

Brilliant! So much fun to stop in today and can't wait to get see the recipe. BTW does the girl on that cover look like Jan Brady to you? I always suspected she'd be the type to cook with cereal.

Um, I need to borrow your husband. Can you send him right away?

That is just beautiful. Finding a pack like that is like finding a unicorn...and now I have a new goal in life!! ;) No power tools for me as I want to keep my appendages.

A couple things. I love your new shadowbox and that kick ass lighting fixture. I, not unlike the Nashville scouts, want to hang out in your house. Invite me over already! I also love that Mr. Kitsch is an enigma...a la Wilson from Home Improvement or The Wizard of Oz...whichever pop culture mystery you prefer.

Wow, what a great find! The display idea was fab as well, and it looks awesome. I am jealous of all of your vintage furnishings, they are gorgeous :)

That was such a good idea to do with those ornaments, I love it! I'm one of those people that thinks there is just nothing prettier than glass Christmas ornaments.

What an amazing idea! I love the display case. And personally I think the Mister show should be called "pickle party" which I do NOT want to know what that means.
what I found fascinating is that he put on a shirt to protect his tshirt from the stain. Sweet!

Please invite me for groundhog cupcakes and tea some sunday afternoon so that I can ooh and ahh in person. I'll bring the twin. :)

Great job, Mr. Kitsch! And wow, I love your lighting fixture. Seasonal projects that don't get done in time--well, that makes me think of my infamous porch glider restoration. By the time I finally finished it, porch season was over. But hey, when spring arrives, I'll be READY! (Did you ever see the pictures of it after I finished it, by the way? http://stacyverb.typepad.com/stacyverb/2012/11/glider-fix-up-phase-four-done.html)

I must let Mr. G read this. maybe it will help to know he isnt alone. You so remind me of me. The box looks great Mr. Kitsch. Oh and I have the same bowl under the awesome box.

Does cooking have a season? Because I have been working (OK, not me; my husband) on my vintage stove now for well over a year. Told everyone it would be done for Thanksgiving *last year*, now hoping it will be done someday before I die....