Fun Happenings at the Ranch

Thanks to everyone who sent well wishes for Moxie, our little Valentine of a foster dog. This weekend, she went to stay with a family that hopes that they'll be able to adopt her. They're trying to see how she transitions with their two dogs but we have fingers crossed that it will work out. And yes, I cried like a goon when she left. In fact, the entire time that the foster was filling out the seven pages of the adoption application, I was a wreck with tears rolling down my face. I imagine that the foster was ready to go running out of my house. Talk about awkward! Yes, I get attached fast.

We got some fun news this week when we found out that a photo that the Mister and I did got chosen as an honorable mention in a contest on the NPR show "Studio 360". The theme of the contest was "Are We Alone in The Universe?" and I knew that I had just the photo in my archives to submit. 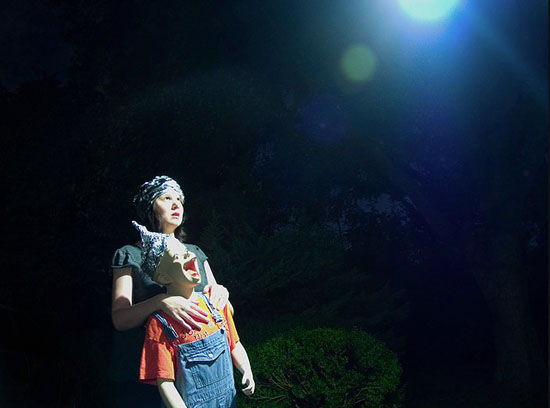 That's me and my mannequin boy Jack wearing tinfoil hats and staring into the landing lights of an actual flying saucer. Okay, not really - we're staring into the flood lights on the side of my house but still...spooky.

I'm a big fan of NPR and "Studio 360" so I was super giddy when I found out that we'd been chosen as a favorite.  Not since Honey Boo Boo recently liked a photo that I posted on her Facebook page have I been so thrilled. (Some of the other Boo Boos liked it too but of course, I was gunning for approval from the main Boo Boo!) Somehow, the NPR approval seems much classier though.

Here is what Michele Siegel from NPR said about our photo:

"This one immediately reminded me of a Gregory Crewdson photo. (Crewdson shoots painstakingly art-directed scenes that look like stills from a magic realist movie.) With the faint shadowy trees in the background and a harsh spooky glow from above, it's tempting to write the image off as too Close Encounters-influenced. But take a closer look at the figures. The child is actually a child-sized mannequin with a creepy and ecstatically happy clown face. The pair might be looking up to the glowing night sky at a sign of extraterrestrial life, but the non-human mannequin also reminds the viewer that here on earth there's often something other-worldly going on too."

It made me laugh that Michele said that Jack has "a creepy and ecstatically happy clown face". That's my boy! He inherited his "face made for radio" from his Mom. I love any comparison to Gregory Crewdson's work as both the Mister and I are huge fans.

I am constantly hatching ideas for photo shoots and then enlisting the Mister to be my photographer. We've done so many funny ones with Jack. The flying saucer photo shoot was one of my favorites ever because we live really close to our next door neighbor and I couldn't help but wonder what he'd think if he looked out of his window and saw the Mister and me with a screaming mannequin boy and tinfoil hats, staring up into the flood lights in the middle of the night.

Here is one of my favorite outtakes: 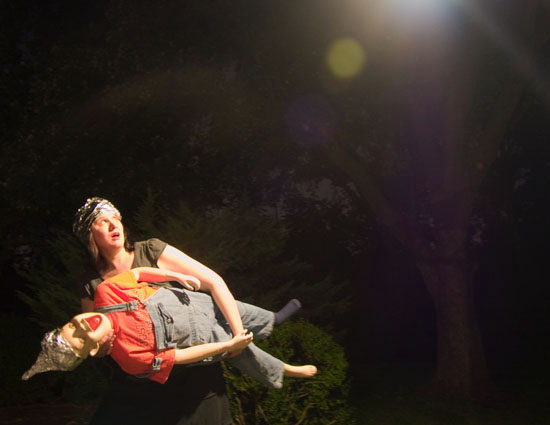 We figure that it will only be a matter of time before Hollywood comes calling.. 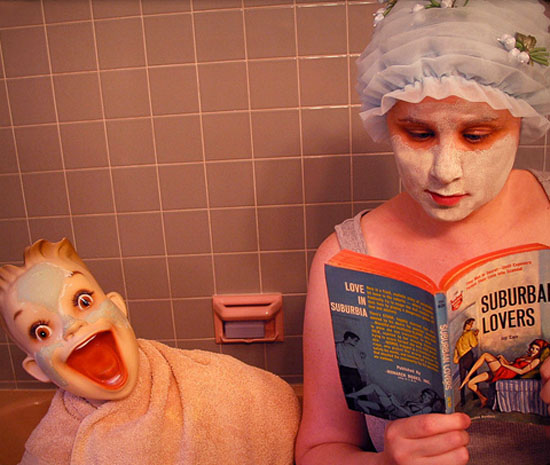 But we'll be prepared! We're getting Jack's face ready for all of those close-ups and I am studying the great novels so that I'll be ready to write movie scripts. I'm sure that Hollywood will ask me to do so.  It will only make sense for it to happen that way.

Posted by Eartha Kitsch at 3:46 PM

thats awesome! You are well on your way to NPR celebrity!!! (and so is your ultra stoked mannequin!)

WOW! That picture is awesome!!
And I'm a little embarrassed I'd never heard of Gregory Crewdson before, but color me obsessed! His work is mind-blowingly eerie and beautiful!

I only wish I was creative enough to think of staged alien photos with clown-faced mannequins. The Lutherans beat it all out of me though, so I'll just have to enjoy yours. I think there's a market out there for tin foil hat fashion! :)

First, congratulations on this lovely recognition; second, I lost it imagining your neighbor looking out the window.

Kudos for owning a mannequin that's going to be featured in my future nightmares. Not that dolls or any variant thereof freak me out or anything.

Congrats are in order, however, because that is such a great photo!

Awesome! I would be proud, too. I love how Jack is equally ecstatic to get a facial with his mommy. What a good boy.

YAY! Jack is back! So happy for your honorable mention!!

I hope Moxie finds a good home, my sister cried when the stray cat that they found left for a new home too and it was only about 2 days :(

Congratulations on the NPR photo!!!! We too did not know of Gregory Crewdson. When we looked him up, Rob found that he saw him in concert with his former band The Speedies many years ago and has their songs on his Ipod!! His photographs are amazing! That is a compliment to be compared to him! :)

awesome! am lusting after your shower cap and the book!

This is so rad! I would poop my pants if NPR ever said anything I did was cool. I love that photo, too. So perfect.

Eartha! That photo should have WON! And the one of you in the tub with the mannequin... All I can say is you are super duper fab!

P.S. I bought my 29-year-old daughter a mannequin for Christmas. I want her to be able to say, when I croak, "My mother was cool. One Christmas she bought me a mannequin." (I actually did a photo shoot with it. Friend me on FB if you want to see it.)

And speaking of photos, my 16-year-old just won second place in the state 4-H photo contest. I should get them on Facebook too... Or at least blog about it. I'm a bad mommy. I'm busy blogging about my grandmother's old glasses and houses that almost killed me.

What the what? Congratulations! These photos are incredible. We like the outtakes, too! Tell us about Jack sometime? Where did he come from? I bet there's a good story there.

That mannequin...is amazing! I love his crazed expression. And that photo is quite eerie, too. And you know me, I love all things creepy and eerie.

Best of luck with the adoption. Even seeing strays along the road as I'm driving breaks my heart.

Congrats on the recognition by NPR. That is so cool. Looks like Jack has had some serious dermabrasion.

Fingers crossed for Miss Moxie! And the Jack pictures literally make me laugh out loud. The tin foil hat! The shower cap! Love.

Oh my I'm hooting with laughter over here! I love your submission (and totally awesome comments from Michael Siegel), but the outtakes are pretty awesome, too.

Hope the new home works out for Moxie!

FAB news, and even Fabber pics. Like mother like dummy I always say (only not so many people can hear me).

I have always loved your Jack photos. I also love that you had this photo in your archives and didn't take it special for the contest!!!

As always, your posts make me laugh out loud in the company of others ("it's a really funny blog" I say). Kudos on your nod from NPR - definitely the classiest news joint around.

The grey and pink tile in your bathroom is the EXACT COLOR COMBO of the one in my parents' house, which I am the biggest fan of ever, and they totally dislike. Also, that second picture of you and Jack is priceless.

I can't believe both you AND Jamie from Owl Really have had these run ins with NPR fame, I want in, I want in! Such a cool picture and I love the NPR description of it...spot on! :) Congrats!

The photo is great!The mannequin is wonderful and horrifying all that the same time.

Ha, congrats! I remember that photo. Not only is it fun, it IS technically wonderful and delightful. Plus I loved that they talked about it at such length! Woo-hoo!

I would love to be your neighbor.. now, where did I put that tinfoil?

Awesome photos! I can see why NPR loved these!

AWESOME!!! Good job!
I can't start a morning without my NPR.

Well, I'm also big fan of both Gregory Crewdson (there's a print of his nightgowned woman in her living room gazing at a circle drawn on her picture window, at the Boca Museum, and I got to hear him talk in West Palm Beach, awesome), and Eartha Kitsch! Nothing brings me more joy than seeing you two described in context. Congratulations to you, and ecstatically happy Jack.

Big congrats........that was always one of my favorite pictures of you and Jack

so cutely scary - you and the boy! I especially love the last shot!!