Those People From The Slides

My Dad sent me a Ziploc bag full of slides that he found in my late Grandfather's things. We have no idea who these people are and so far, I'm not recognizing anyone as family. My Grandfather was a wheeler-dealer and bought and resold everything in the world so chances are, he bought them somewhere and just held on to them. Oh you know...like people in my family do. Ahem. I get it honest. Only three slides from the bunch are scanned so far but here is a sampling of one. 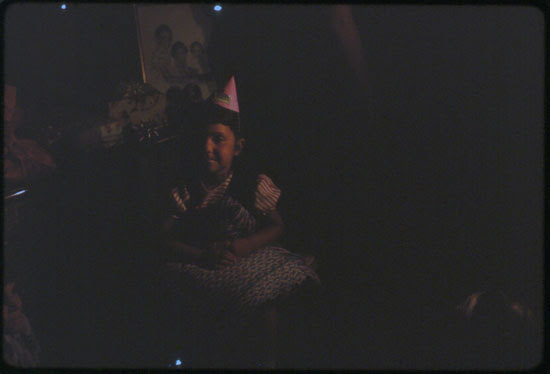 So mysterious, this one. The others are a cute little kid's scene that I need to do some repair work to and one of some sailors on their ship. You KNOW it's going to kill me to never know who these people are - seriously. The slides are in pretty bad condition with scratches and a lot of fading but I can't wait to get the rest of them scanned and see the tiny little worlds that each one holds. I'll be sure and let you see too!

I hope that you all are having a great Wednesday. I'm walking around exhausted today. We were up in the middle of the night, watching the weather reports due to tornado warnings and high winds. I hate, hate, hate being awaken by the drone of the tornado sirens. It's totally creepy. I always take storms really seriously because we have a lot of large trees next to our house. Without my Henny Penny-ing around, Mister Kitsch could more than likely sleep through the sirens and ignore them - thus he didn't wake up when they went off. Nor did he wake up when I switched on the TV to see that the black computer screen with it's automated drone voice was telling us to take cover.

After I called his name a few times without waking him, I decided to shake his arm. The poor guy jumped up screaming and literally catapulted Mr. Kitten Pants who'd been laying across him. I could only watch as that poor cat went flying through the air over my shoulder and landing in the hall with a skid before looking at us like we were out to get him. I'm pretty sure he'd always thought that the broom or vacuum would be his demise so he was pretty surprised at the turn of events. He skulked under the bed with a brush-broom sized tail and wide orange eyes.

After that, we spent a brief stint in and out of the hall closet wearing our scooter helmets and with hasty backup lighting of tiny plastic toy lanterns that we bought for my niece and nephew. Having no basement or storm shelter, we'd cleared out the closet before we went to bed and were now surrounded by it's contents: Christmas decorations. Every time that I heard the house pop and creak, I imagined the authorities finding us like that if things turned towards the worse - the two of us wedged into a 4 x 3 closet  wearing helmets and clutching wee pastel lanterns.  Smiling Santas and crushed ornaments all around us. Mr. Kitten Pants would be interviewed by local news stations and would tell them that we only got what we deserved.

I think you ought to make up names for all the people in the slides and then stick to that story. You could even start asking relatives if they remember Cousin Margaret's birthday party...and show them the slide to "prove" that it took place! :)

we slept through all the warnings last night. we have a radio that travis' dad got us that alerts you to bad weather but I unplugged it a while ago because it goes of at 3 am when it isn't even raining! hah. i'm glad we all made it through!

I agree with Dana, isn't it wonderfully aggravating to stare into someone else past and wonder "what became of them?"

We had sirens/warnings here in Louisville too. It was the first time I ever heard them go off and it took me a few minutes to realize what it was. I, too, spent some time in a closet. Glad you, the mister and Mr. Kitten Pants survived the trauma of the tornado alarms!

I have a bunch of old black and white prints that were first my great-grandma's, then my grandma's, and now mine. I know they are people from the Croatian fishing community in Bellingham, WA in the 20's-30's. They are amazing photos--1st generation immigrants, young, draped on cars, lounging on beaches, posing on ship decks. I have no idea what to do with them other than treasure them, but I feel like I should be doing something.

I apparently signed up for weather alerts on my phone, which rests next to my pillow...so every hour it was startling me awake! I sleep next to a floor to ceiling window yet couldn't muster the energy to even cover my head. Kudos to you for being a storm warrior. I clearly need to borrow some scooter helmets

Oh, the Mister would be so proud that y'all wore the scooter helmets! He is a tornado preparation FREAK. We were down in the basement, sitting in our lawn chairs in the corner for an hour while he obsessed over that storm. I really think they need to make Thunder Shirts for people like they do for dogs. I would buy him one, for sure.

I can't imagine what living in an area where tornadoes are prevalent would be like. We get them here up north on occasion, but its more rare where I live. Glad to see you survived...thank God for scooter helmets!

Re: slides, you grandfather sounds like he was a pretty interesting guy collecting this kind of stuff!

I lived in South Florida years ago and would hear a recording played over a loud speaker -- at first I assumed it was the local high school, but sometimes it would sound on the weekends and into the night. After a few weeks, I asked my cashier at Publix about it and she said it was for the local nuclear power station. Turns out there was one just a few miles away and they were testing their system just in case.

Also, during Hurricane Charley, Miss OLJS and I were alone, so for a hiding place we decided to use my closet. It had to be cleaned out first -- I found that I owned way too many shoes. As the hurricane approached the power went out, so we "hunkered-down" while listening to the radio -- all of a sudden I heard this roaring sound and was sure that it was the hurricane or a tornado spawned by it, but turns out it was Miss OLJS curled up in the corner snoring.

I'm glad you all made it through the storms safely! Poor Mr. Kitten Pants, soaring through the air like Dorothy's house. Has he recovered?

I'm like you when it comes to storms. All of the critters (save Ben, who clings to me like a burr) are herded into the basement 'just in case' when we get warnings. I have even insisted on a Middle Of The Night Event Plan, which we actually needed a couple of times last summer. Zach thinks all of this is hilarious and I shouldn't take the warnings too seriously, but we've several large trees near the house as well.

I like Dana's idea of making up stories about the people in the slides, too. ;)