Since I'm coming to you from Nashville, Tennessee, I'd love to show you a number of the ranch homes of some of the entertainment greats who live and have lived here. There is so much history in this town and being able to see the homes of such great artists really thrills me. I'll never forget telling my late grandfather that yes, I did indeed drive past George Jones' house from time to time! That really tickled him.

First up, I'd like to show you the home of the late, great Patsy Cline. 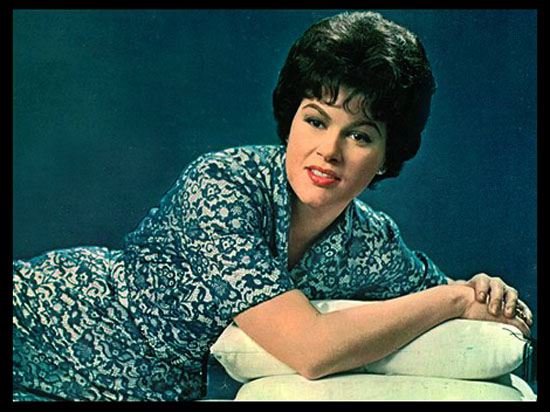 I remember looking at her album covers when I was a young girl and thinking that she must have been one of the most beautiful women on Earth! I still believe that she was. Her talent was equally as splendid. In a time when women normally appeared as opening acts for their male counterparts, Patsy blazed a trail as a headlining act.

I'm sure that most of you are familiar with Patsy's music and her story. She found her fame first off in 1956 in her twenties and had enormous stardom. Sadly, her time with us was short-lived. On March 3, 1963, she was gone at the young age of 30. She passed away in the crash of a private plane that was flown by her manager Randy Hughes, along with fellow stars, Cowboy Copas and Hawkshaw Hawkins after performing in a show in Kansas City. Her friend and fellow entertainer, Dottie West offered her a ride home in her car, but Patsy wanted to quickly return home to her children at her home in Nashville and decided to travel in the plane. The plane went down in a wooded area near Camden, Tennessee - a mere 90 miles from their destination.

Patsy was originally from Winchester, Virginia and moved to Nashville for the music scene. Patsy's dream home is located in a small community just outside of Nashville. The home sits on a mid-sized lot in a quiet subdivision neighborhood. Though it might seem modest by today's standards, at the time, it was Patsy's brand new dream ranch home: 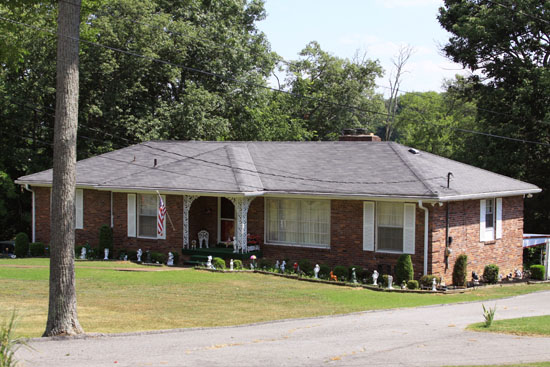 This is what the home looks like today - still a sweet ranch house. I love the wrought iron details around the front porch. I have to admit that kind of like when I went to Graceland, I expected a huge, grand and outlandish mansion in line with today's wealth flaunting style. It makes me happy to see her home looking like a normal home of today.

Success enabled Cline to buy her dream home in Nashville's Goodlettsville community, personally decorated in her style featuring gold dust sprinkled in the bathroom tiles and a music room. Loretta Lynn stated in a 1986 documentary interview, "She called me into the front yard and said, 'Isn't this pretty? Now I'll never be happy until I have my Mama one just like it.'"

Gold dust sprinkled in the tile! How about that? Splendid!

Patsy called her home "The House That Vegas Built" since she was able to pay it off with the money she earned during her time there headlining her own show. That gold dust is a very Vegas (and Patsy) touch.

I'll leave you with Patsy singing one of her many great hits. She is greatly missed and still just as greatly admired.

Until next time,
x's and o's,
Eartha
Posted by Eartha Kitsch at 9:49 AM

Oh Patsy had such a voice! I'm so pleased to see that her dream home was also a cute brick ranch. She's was really decked out in that video too. i haven't seen that much fringe since I walked by the Persian rug shop.

I know! I wish that there was more fringe left in the world. It's so mesmerizing. As is the slow, awkward claps of those in the background of this video. :)

I also love that she had a nice little ranch home. I want to go inside and see if that gold dust tile is still there!

that is sooooo sweet, I want to see if the gold dust is there too!I LOVE HER HOUSE!!!! I did not know much about her until the 80's I heard the popular songs and then I worked with a girl who was OBSESSED with her and she gave me a tape of her music! LOVE HER!

Can you even imagine how totally awesome her house would be on the inside - if it is still original! Totally swoon worthy! I would definitely rather have her adorable house than the mansions of the stars today! Love it! And, it looks like they have some concrete yard animal love goin' on in the front planting beds - too cute!

Wasn't Patsy in a car crash at and she was injured and went through that phase where she wore headbands in order to cover up the scar, yes? She a kind of gold braided one that I always thought was so cool! (Yes it's on Wikipedia -- Dottie West picked glass from Patsy hair after the crash).

Her house is very, very sweet. I'm relieved that it's still there and looking adorable!

Monica: I'm so glad that you love her too! If that house ever comes up for sale, you can bet I'll be in there to see what it looks like - and I'll report back!

Sara: I know! And to be able to say that you live in Patsy Cline's house? Wow. I read somewhere today that the next owner believed that the house was haunted. Can you believe all of that yard art? Love. It.

Charm and Poise: You're good! I almost posted a photo of her with that headband. I read that she used headbands and wigs both. I know right where that wreck was too. Weird landmarks around here, I'll tell ya.

First of all: Hot Damn! You are blogging! I had no idea. I have a month's worth of posts to catch up on--which I am looking very much forward to.

Secondly: love this post! Like you, I was happily surprised to see that Graceland was smaller than the McMansions that have cropped up around our little lake. (Which appear to be inhabited by nuclear families with 1-2 children at most. What goes on in all those rooms?) I love Patsy, and I love that her dream home was this sweet little ranch. With gold dust in the bathroom.

Karen: Well, hey! It's good to see you here! I left Flickr for a bit but am now back on Flickr and also doing the blog. Please come by anytime. Not even I know what is going to happen! :)

And ha! I'm like you - I always try to figure out what people do with all of those rooms. I bet they can't even find each other in there..probably just a lot of hollering into intercoms!

That gold dust in the bathroom is SO perfect for Patsy's dream home. I wish she could have lived there many years.

Straight Talking Mama: Ha! Me too! I wish that I were a more outgoing door knocker. A lot of people would knock on the door and just ask but yeah, not me. If it ever goes up for sale though, I promise I'll get us a full tour.

Oh Patsy... no one sings an aching heart like she did.

I loved visiting Elvis's childhood home in Tupelo. Nice little shot-gun shack on the wrong side of the tracks. Have you been?

Walking After Midnight is a fav. This is a fun little trip - hope to see more 'stars' homes tours! :)

Elizabeth: You're right about that. She really makes you feel it.

You know, I haven't been lucky enough to get to Tupelo yet but I have seen pictures and REALLY want to go!

Heather: That is a great song. And thanks! I have several more homes on tap for the site. The next one up is one of my favorite homes around. Stay tuned!

Such a quaint little house. You really wouldn't expect a star to have such a nice little patch of ranch heaven. =)