The "I Want To Own Him Immediately" Santa

If you've been taking a spin on the Wacky Santa Train (choo! choo!) with me this week, you'll know by now that I delight not only in Christmas but also in the Crazy Creepy Christmas. It was with pure unbridled joy today that I came across this guy: 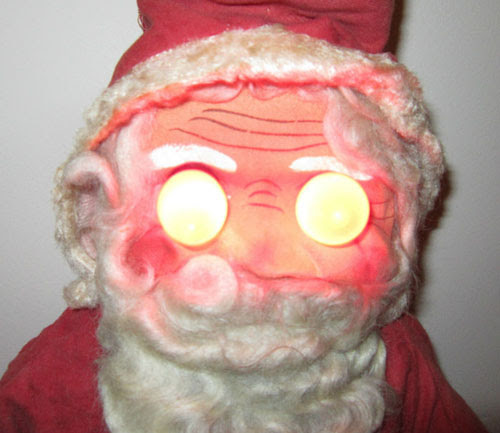 Um, whoa.
And are you thinking what I'm thinking? 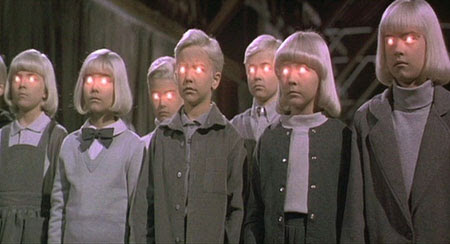 Someone took The Village of The Damned and mixed it with Christmas. Someone who obviously knows the inner longings of my heart.

No, no....unfortunately I do not own him (hangs head in sadness) but it's this shot that makes me want to own him more than anything: Oh my gosh.
Want some more? Because you KNOW you do! 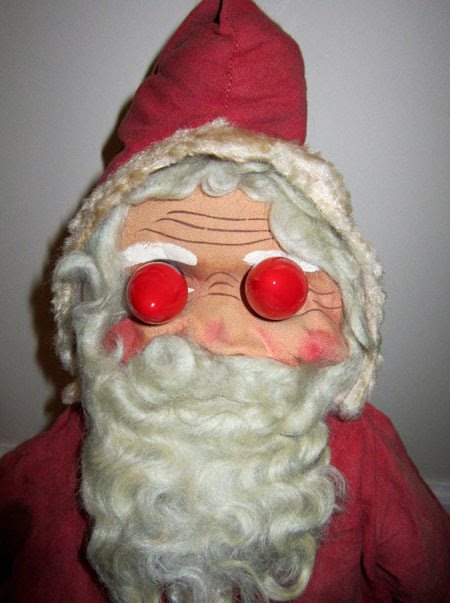 That picture right there makes me want to buy him just so that I can use this shot on my Christmas cards next year. Could I possibly love him more? Because, no..I couldn't.

Here is the text from the eBay auction:

You are bidding on what I believe to be the coolest vintage stuffed Santa in existence. This Santa appears to have been made in the 30s or 40s The body and head are stuffed, the face is painted and he has light sockets for eyes. When plugged in, the eyes flash on and off. All pieces of the Santa suit are present except for perhaps his belt, if he in fact had a belt originally. Both Santa and the suit are in about the condition you would expect of a 60-70 year old item, worn but presentable. This is the easily the coolest and creepiest Santa I have ever seen and I believe it's pretty rare, try to find another on the net. If you've read this far, you know you want him. Look into his eyes...go ahead...bid. It's true - he is rare. And I've never seen one before as if I had, I'd still be talking about it even if it were years ago. As for now, I will only dream about him coming to Kitschville as all of my "fun money" has to go to things that don't evoke shrieks of glee this year. But if you want to make him yours, go on over and see the super nice seller bertie2330 here: Ho! Ho! Ho!

Holy crap. You win! You win at... something. OMFG, it's kind of vulgar. I can't wait to link back to you for Creepy Thrifted Clo... Santa Sunday!

i would want him too. my husband already things my kron pug lamp is scary, i can only imagine his opinion of that creepy santa!

WTF? I saw Little Orphan Annie in the first pic.

I'd remove the bulbs and leave him with no eyes. Creepy as hell. Buy him.

You know it's not just how creepy it is or that anyone would want him NOW, it's that once upon a time this was made and sold as a non creepy holiday addition to the home. I'm speechless. Mostly because I'm afraid that thing is listening.

I want my mommy.

Hands down scariest muther f'n Santa I have ever seen. I bet there is another one like this out there, but it is a clown. Together they oversee a special place in hell for all those 'naughty' children. You better watch out!

i am the most afraid of that guy. eek!

I think he looks most scary when the lights are off! Eeeek!

I am going to have nightmares about this. Just Wrong on So Many Levels. Sometimes you are one scary dude, EK.