Hey all! Two things that I'd like to tell you about today. First, there is a bake sale tomorrow in East Nashville to raise money for a nice young couple who have been handed a $2700 vet bill for their kitty. Ouch. That's a lot of money and they have two small daughters to take care of as well. Their poor cat swallowed a sewing thread and it got wrapped around his intestines, stomach and esophagus and he was in a lot of danger there for a bit. Neighbors are pitching in to try and help them pay some of that bill. I decided to make cat cupcakes: 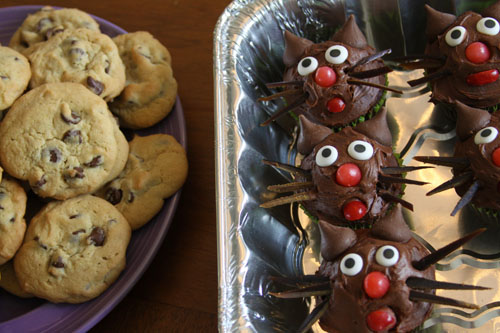 It's okay to laugh. I know that they're truly ridiculous and not at all what I had pictured in my head. I wanted them to look happy but instead, they look like they're in distress. I'm kind of embarrassed to take them to a bake sale for a kitty who's actually been in distress. Would you take them? W.W.Y.D.? Should I just act like they never happened and take the cookies by themselves? Remove their little faces and put on more icing and cover up the whole fiasco with zippy rainbow sprinkles? Do tell! Be my compass, readers.

I'd wanted to use small shoestring licorice for the whiskers but as it's apparently too old timey to be carried in stores anymore, I bought a block of licorice and cut my own. Which don't look like whiskers at all but like maybe the kitties had run-ins with a roving band of porcupines. I put them next to the chocolate chip cookies above to convince you that they are truly baked goods and not just a heinous joke. At this time, I have no comment on their whackadoodle mouths.

If you'd like to come support this nice family and their kitty, the bake sale is between noon and six tomorrow, Saturday the 15th at the Green Wagon. It's at 1100 Forrest Avenue in East Nashville. I promise there will be lots of yummy things to purchase there and some of the local animal rescue groups will be representin'. I hear there will be puppies!

However, you will not find me there as I am going to drop off my pitiful excuse for kitty cat cupcakes and go across the street to my favorite pizza joint, Pizzareal and drown my cupcake making ineptness by eating many, many pizzas.

MAMA HEN MOMENT: I'd also like to take this opportunity to say that we need to be vigilant to make sure that our kitties don't get anything like thread, yarn or string within a mile of them. This goes for curling ribbons too. Anything like that can be quickly swallowed and can be super deadly to them. Now, I know that you've seen all of the kitties illustrated down through history who are playing with yarn - No sir. No ma'am. Don't let 'em. I can't even begin to tell you all of the horror stories that I've witnessed in my time at vet's offices due to strings, threads and ribbons. And last year, Pip swallowed a string and we waited in horror for days to see what was going to happen to her. Fortunately, she was okay but many other kitties haven't been so lucky.

In other pet related news, my pal Barbara needs help if you can. You may be a follower of her blog If I Didn't Have A Sense of Humor. If you're not, check her out. She is hilarious and her specialty is making funny with vintage ads. She's also a really good person who is a real champion for animals. She is currently battling with Bank of America (boo! hiss!) to try and keep her home after some of their shady mortgage dealings. And since bad things often come in pairs, she was told that her beautiful dog Minnie needs $4000 worth of surgery to save her knees. 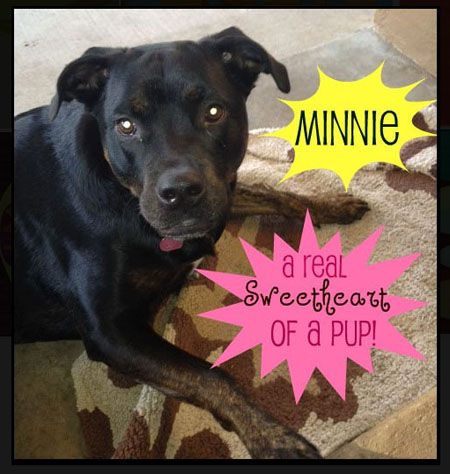 When it rains, it pours, huh? We're trying to raise just a portion of that $4000 and have set up a Chip-In to try to take the edge off of those medical bills. If you'd like to give to help them out, you can click here:

Any amount would go a long way towards helping. I just can't imagine poor Minnie not being able to walk without being in horrible pain and I can't tell you how great of a person Barbara is. She once helped me rehome two little dogs who were left homeless after a drive-by murder left them without owners. She doesn't mind getting in the trenches and helping change lives of animals. She's helped pass the word about so many of my own animal rescue causes and has a true heart of gold. And she sends me wacky eBay links and nice notes and fruits with faces in the mail when she can tell that I need uplifting. She's a good egg.

Thanks y'all! I hope that you have a great weekend!

Until next time,
x's and o's,
Eartha
Posted by Eartha Kitsch at 7:17 PM

Thank you, my precious. I hope you finally used your bundt pan!

String, yarn, thread - all my biggest nightmares for my cats. I have one who will devour a string in 2 seconds flat. She once ate a 2-3" ribbon without me knowing. I came home to find her in the kitchen with her booty up against the wall. For good reason - she'd turned into a feline cat toy, with 2" of the ribbon hanging out of her butt! Any time she moved, my other cats were on top of her. As you well know, you can do damage if you pull string or ribbon when it's coming out that end so thankfully none of the other cats got a good hold on it.

Thankfully it made it through her system okay - I didn't even know she ingested it so I wasn't watching her and didn't bring her to the vet.

But YES and thank you for making a point to tell people this is a very big deal for cats.

Awww, those kitty cupcakes are cute. You must take them! You are so right about the dangers of cats with yarn and ribbon. The poor beasts just don't know any better, so we need to protect them from themselves. I'm chipping in a bit of dough for Minnie's knee. Wish it could be more, but as you know we have vet bills of our own here at my house this week.

That is what you should call them AND please take them to the bake sale!

A few years ago we purchased a memory foam mattress topper and Miss OLJS decided to eat some of it. Luckily we "recovered" most of it within a few days, but now on laundry day we have to keep the bedroom door closed.

Hm, I was going to suggest removing the little mouths, but I kinda like the "Scaredy Cats" idea! But if you are uncertain, maybe remove the mouths and frost over the spot. Do you have sprinkles or anything like that? You could make little kitty mouths with those, I guess...Frosting in a tube (or baggie w/the corner cut off?).

The whiskers are cute, IMO.

Also, told one of my other Nashville galpals and she and a girlfriend are going to try and swing by the bake sale. I would if we were there, but now I'm just sending surrogates. ;)

I really am a fan of the Scaredy Cats...

I think the kitty cuppiecakes are precious! Don't do a thing to them... Makes me wanna make some. Love your posts

oh gosh that freaks me out. i have gotten on to travis a million times about living spools of thread out. that is my nightmare. we're going to be out and about tomorrow morning so i'm planning on stopping by for one of those cupcakes! i think they are cute! but i'm a weirdo. haha.

The kitty cupcakes are definitely cute. My heart goes out to those poor animals and their humans. Wish I could help every single animal in distress.

You should absolutely take the cat cupcakes, they are PERFECT as is. No cat likes to go to the vet, which could reinforce your message of making sure cats have safe (stringless) homes.

I had a cat who liked to play with pecans (in the shell) and avocado pits. Both roll wonky and he really liked that. Better than string.
Kate H

I would definitely eat one of those kitty cupcakes!