Oh, Spring... I'd love to say that I love Spring. That I run around in cute little sundresses with no shoes, gathering wildflowers and..

Okay, I can't stand Spring. Let me count the ways.. 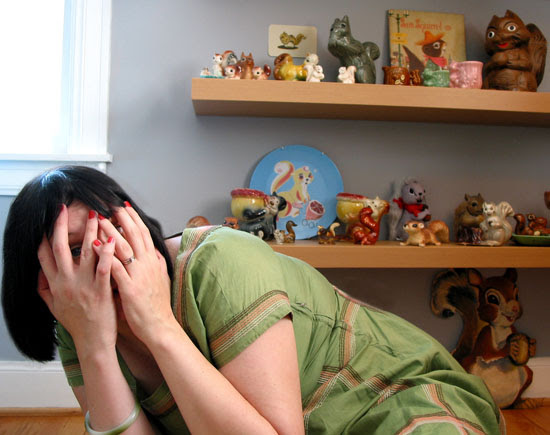 1. Pollen: Last year, I went to an allergist who shoved needles into my skin which were covered in every kind of allergen known to man. I learned there that I am not allergic to Spring pollens like most people are. Yet somehow, I have been completely killed off by the pollen this year. The florescent yucky yellowness has coated everything and I was in bed all weekend, coughing and whining. And watching International House Hunters on Hulu which always makes me embarrassed to be an American. When I finally unraveled and began to cough-shriek at a woman who didn't understand why tiny Taiwanese apartments wouldn't hold her precious king-sized bed, the Mister came in and intervened by putting on season one of Mad Men. God bless him. And his cough syrup pushin' ways.

Related: I want this. I REALLY want this:

2. Ssssssnakes: The other day, I was in my garage and needed an extension cord. I bent over to grab one from the floor and as luck would have it, I noticed at the last minute that oh my gosh, there was a snake there too! Okay, can you imagine if I had picked up the snake instead? Dear lord. So, I started screaming. Not a quaint little scream but a full fledged "I am in a horror movie and a man is chasing me with a machete through the woods" scream. I don't know where it came from but out it came. The Mister heard me all the way on the other side of the house and came running. And don't believe it when people say, "They're more afraid of you than you are of them." I was the only one screaming and running, people. Mister Snake had done copped himself a squat and wasn't going anywhere. In fact, I think he had called room service and was waiting on a lunch menu.

I jumped into the Toyota and slammed the door and screeched at the Mister through the closed window as he pursued the snake and got it into a cardboard box and took it way back into the wooded area. Now, going into my garage seriously freaks me out. I don't mind snakes in their own element. But not in MY element. And not when they pretend to be extension cords. However, I'm glad that I learned that I am actually one of those people who can let out a scream when terrified and not be rendered mute like I sometimes am in my nightmares.

3. Spiders: Tennessee is spider country. We have these S.O.B.s here called Brown Recluses whose bites will rot your skin out if they get ahold of you. 'Nuff said about those guys because as I have learned in the past, much like Beetlejuice, the mere mention of their name brings them forth.

Related: Because I refuse to post a video with real spiders. And Joi is a scream.

Whoowhee..Did you see that cobra? I think I used to date that guy. Thanks Match.com!

Now onto something happier. Blog stats!

I learned that some folks found Ranch Dressing this week by looking up these phrases:

Truly, number four makes me shudder the most. Only two of the four listed above have ever been mentioned here on Ranch Dressing. I sometimes wonder how many people I fail by not having what they come here for. Especially the dinosaur semen people. Sigh. I predict that it will be a long time before I have anything to offer the dinosaur semen folks.

Until next time,
x's and o's,
Eartha
Posted by Eartha Kitsch at 1:31 PM

uuuhhh sorry i'm having a hard time reading this with all of those squirrels in the background of that first picture!!! i have a poster of that cannibal kingdom squirrel pushing the ham that i need to get framed!

Ooh good job at putting me off EVER going to the South. I've always fancied the lemonade-y porch-y, cute accents side of things, but I'm attached to my flesh and really don't enjoy spiders. Might go and watch Beetlejuice now though.

Your blog stats are possibly even more bizarre than mine, which is impressive! I got 'piss cross stitch images' recently, which was a wee bit unnerving (pun intended)
x

Ugghhh! That whole snake thing...gives me the the shudders!Glad you got out of there pronto! And you are right, that is the BEST profanity editing EVER!!!

And the Brown Recluses, lord have mercy - makes me almost happy we have scorpions here. :D But we have tons of Black Widows too. eeks!!!!

You seriously get the best searches ever - Dinosaur Semen!?! K-Razy!!!!

oemgeeeee. you're not the only spring hater out there. we get squirrels in the ceiling and groundhogs in the garbage cans. i'm awful at being outside. the other day a finch flew in to my shin. A BIRD FLEW IN TO MY SHIN!!!! rilly. wtf.

lol! lol! dino semen???i mean really, i think your hubs is secretly doing the searches because that is just too good.

the thing about the snake story that is the most amazing is that you were looking for the extension cord! not like a wrench or something non-snakey which makes it literally a nightmare.

Oh my gosh, I almost blew rootbeer out my nose watching the Snakes on a Plane TV edit. SO stinken hilarious. I love watching my favorite movies on TV and watching for how they edit out the cuss words.

In unrelated news - one of the words I have to type to prove I'm not a robot is "roingled" hahah. What?!

I'm laughing my socks off right now. God, you're brilliant.

Anyhoo, a big, BIG thank you for the Joi Lansing vid. How have I never seen her before? I must go and look for more. That routine has EVERYTHING!

Sorry you're not enjoying Spring. For us northeners it's wonderful to leave the short dark days of winter behind. Also here in the UK, we only have one poisonous snake (the adder), and they're pretty rare, so I guess the experience is very different!

Ugh, I hate it when spring comes early! Allergies, bugs, etc... The only thing I do like is the warmer weather. I normally don't mind spiders, especially since they kill other bugs, but those spiders you mentioned sounded nasty!!

Oh yeah, we have the brown recluses down here as well. Whenever I see an ugly brown spider I console myself with the logic that if I can see it, it's not being reclusive. Therefore it can't be one of those, and therefore not terrifying. See what I did there? Also, "monkey-fightin'" is now my new favorite swear word! So thanks for that. :)

Scratch Tennessee from bucket list of places to visit in America. Brown recluse?! Snakes?! I now have both legs crossed indian style on my chair.

Hello - I'm new here - Vickie's my name and I would like to state right clear I did NOT find this place by way of a search for dinosaur semen :- )

Fun blog & I shall be back often if y'all will have me.

OH MY GOD,guess what movie I watched yesterday on THIS? Remember http://en.wikipedia.org/wiki/SSSSSSS ? That was one of those movies I saw on TV all the time as a kid in the 70's and it scared the crap outta me! It was so cool seeing it again

Trust me,in Texas,we dodge scorpions,brown recluses,snakes,and everything else you can think of. It's like Mutual of freakin Omaha up in here