But when they're parking their cars on your chest, you still got a view of the Summer sky

So, the last time that you all heard from me, it was Friday night. I had just finished spending the day making cupcakes and was wondering if they were too creepy to take to a fundraiser bake sale. Oh, ho ho...those were such innocent times, my friends. Such innocent times.

When I went to bed on Friday night, I'd decided (thanks to the encouraging words from my Ranch Dressing friends) to take them to the sale and to be proud of them. Sure, they looked a little creepy but they still looked like cats and that was the goal. Done. Contentment.

Saturday morning, I woke up and all Hell broke loose. My alarm clock was beat to the punch by that distinct sound that can not be mistaken for any other. You cat owners know where I'm going with this. Oh yes, that's right. Kitty cat throw-up. I sprang to my feet to find Pip in the bedroom floor unleashing the fury of last night's dinner. Uggh. In my groggy haze, I managed to clean that up and went to the kitchen to get the morning rituals started. But oh no.. Before I could even get my morning cup of wake-up, I heard the sound again. This time, it was Mishka back in the bedroom for a repeat performance of Pip's perfect storm. Seriously??

Not to worry - I didn't document this part of my morning with photos. Though, I do have this one from a thrift store that fits perfectly. 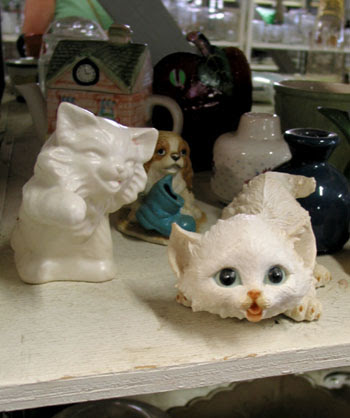 In the above scenario, that's Mishka laughing at Pip but little does she know that minutes later, she too will be tossing her cookies. Sobu would be the dog in the background offering one of my shoes to throw up into instead.

After clean-up, I went to the kitchen, hopeful for a restart to my day. Then I noticed them. The cat cupcakes. They had completely destroyed themselves overnight. 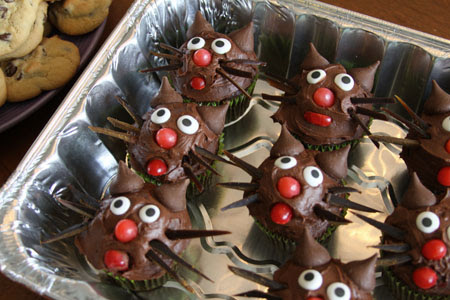 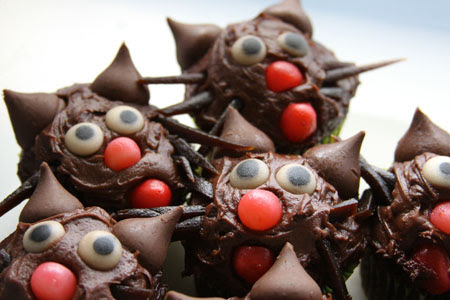 The moisture from the all-natural licorice had wicked into the cupcakes, leaving greasy pools in the icing - which was then partially soaked up by the little candy eyes which were now bloated, brown and gooey. The whiskers slid from their faces like mud slide debris and their expressions which were once comical now seemed to cry out for help. 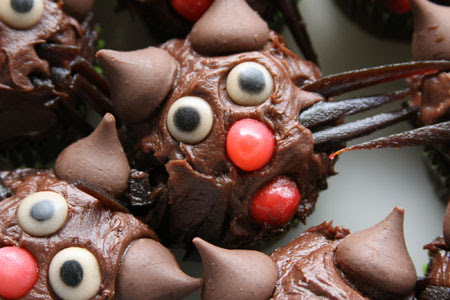 
Twenty little faces...all staring at me with horror in their eyes. But I'm pretty sure that it was nothing in comparison to the horror in my eyes. I'd spent half a day making them and the bake sale was starting in a few hours. I felt pretty lame after promising to bring cat cupcakes and I'd signed up to bring two items and now only had one. After a bit of whimpering and whining, I jumped into action and found that I had barely enough ingredients in my house to make oatmeal raisin cookies. Those would have to do.

I made the dough and popped the first batch into the oven, only to find that the ancient piece of junk was malfunctioning and shooting up a hundred degrees over what it was set to. Over the course of a couple of hours, I somehow managed to get the cookies made. But not without a complete crying jag with the Mister long distance over the phone and having chest pains. Oh, and with Pip deciding to absorb my stress and bite my legs over and over as I worked. It was one of those mornings when everything was falling on top of me. I pulled myself together as best I could and decided that I would deliver the cookies to the bake sale and come back home, draw the curtains and watch movies for the rest of the day. I seriously needed some "me" time before I snapped.

I was in my car and about ten minutes from the bake sale when oh yes, I saw two dogs running down the middle of the road, barely being missed by traffic. I pulled over and opened my car door and called to them. The black lab of the pair leaped into my car and started bounding across me happily. I threw my car into park in someone's driveway, closed the dog inside of my car and went after the other dog, who was completely terrified of me and now running like lightning up the road.

I sulked back to my car to see that the black lab was in my back seat, running back and forth across my baked goods. Of course. Two days of work and the bake sale was now officially history.

And then there was this girl who was looking to me to fix things. 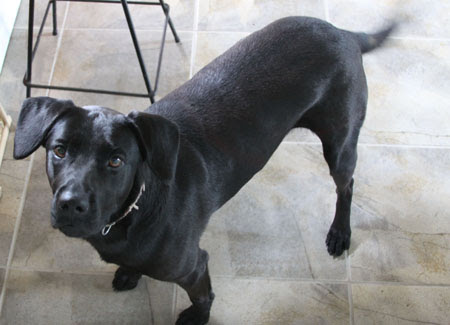 Pretty cute, huh? She had a collar but no tags. Nobody knew her. I took her to the vet and they found no microchip either. I knew that I could either release her back out onto the street (which wasn't going to happen) or take her to the pound where she would most likely never make it out alive - so we headed to my house. I set her up on my sun porch with some pretty whacked-out cats staring at her through the window. Two of them have never seen a dog before and I'm pretty sure that their minds were blown.

I spent the next eight hours contacting rescues, placing ads, making phone calls and trying to keep her calm. Which didn't work. She was completely spazzing out, barking and wanting to go home. I couldn't leave her alone for a second. Every time that I took her for a walk to do her business, she literally dragged me around the yard. Two days later and I can barely use my left hand due to leash bruises.

Late that night, she was reunited with her Mom (who she also dragged around like a rag doll on the leash) and I learned that the other dog had been found as well. I went home to spend the next couple of hours cleaning up mud from my sun porch floors, walls and windows. And of course, eating crushed cookies for dinner. I then fell into bed. Yesterday, I worked trying to get muddy paw prints off of my car upholstery. I've yet to have that "me" time. That's what I get for even telling the universe that I was planning to do so.

And since the universe seems to be eavesdropping: TAGS WITH PHONE NUMBERS. MICROCHIPS. EVERYONE. DO IT. NOW. SOMEWHERE THERE IS AN OVERTAXED ANIMAL RESCUER ABOUT TO SNAP.

On a happier note, thanks to those of you who have donated to the Chip-In for Barbara and Minnie. We really appreciate it!

And I'll leave you with the video for the song that my post title came from. A Saint Bernard saves the day. Do any of you remember that cartoon where the Saint Bernard comes to the aid of Yosemite Sam, only to mix a martini and get drunk and leave him? I'll attach that one too.

oh god those cat cupcakes! so freaking scary!!!
you are a sweet heart for picking up that dog and getting her out of traffic. both of ours are micro-chipped and tagged though i'm not sure how far from home they could get, haaha.
what a freaking day. you definitely deserve some R&R after that.

OMG, I am so sorry - those sad cupcakes made me laugh. Made me think of, "The best laid plans of mice and men often go astray."
thriftshopcommando.blogspot.com

Oh gosh, I love your cat cupcakes - even after they had melted a bit I thought they were still cute.

I am sorry for your awful weekend, glad everything turned out ok with the pup though!

Here's to a less eventful weekend next go round! :D

That is one fucked up day, Missy.

I can't even bring myself to crack a joke about it.

Well it might not have turned out how you planned, but any day you get a dog out of danger and reunited with his owner has to be pretty good. And the cakes looked great, even after their metamorphosis.

But perhaps you deserve a little rest now, huh? Go have a lie-down, maybe?

As a woman who once had merry Santa-face cupcakes melt into psycho-killer bloody-eyed santa cupcakes, my heart went out to you. Go peruse the blog at cakewrecks.com until you laugh, because there are far more freakish things out there that people did on purpose. And I hope you have a spectacular day soon to make up for this one. Oof!

Sorry you had such a rough day...your good deeds will not go unpunished eh? Hope you get your "me" time

This was the first blog post I read this morning - laughed out loud! You poor thing.

The waterlogged eyes on those cupcakes look like filmy old cataracts on elderly kitties. You could have told the bake sale folks you were celebrating senior animals.

If someone found my beloved, muddy, escaped dog (which will never ever ever happen, knock wood), I would totally pay to have her car detailed.

How sweet of you to rescue that dog. I love hearing stories of rescue....too bad about the bake sale though.

WOW, you heard me about to snap all the way from Arizona? You've got some keen ears, lady!

I have to admit I rather liked the kitty cat cupcakes after they melted into mutant felines, just because they look so confused & bedraggled! There is something cute in that, I think.

I love, love, love your blog! I run a dog rescue and each day is more eventful than the last... I usually catch up on your blog right before I get ready for bed (like I am doing tonight) because you always crack me up & after a long day I sure need that! :)

Too funny,I just now saw this after my angry rant about tags with phone numbers the other day! "overtaxed rescuers" indeed!

phew! what a trip! looks like we're hanging out in the same gross place this week!