You ever have one of those days...

When you search your house for an hour and a half looking for Bundt cake pans and just can't figure out where you put them? 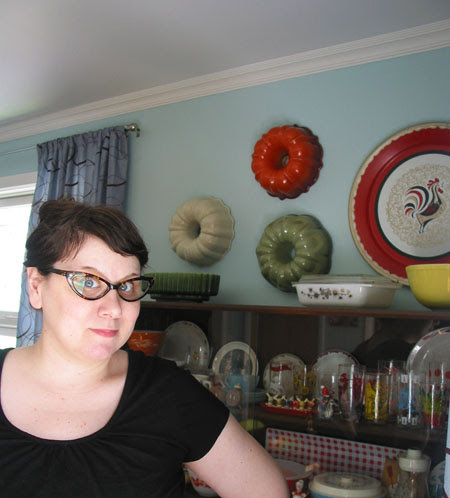 Hmm...now where can they possibly be?

Like my grandma used to say: "If they'd been a snake, they would have bit you!"

(She'd probably also say "Don't leave the house without a dime for the pay phone" and "Don't post photos of yourself with no makeup" and "What did you comb your hair with? A rake?")

Those pans have been on that wall for three months now. This coming from the person who gets upset if she adds a new knick-knack to a display and the Mister doesn't notice immediately when he comes home. "It's the squirrel with the glitter vest! You don't love me!!"

I felt so old and senile when I finally noticed where the pans were. And too tired to even bake a cake anymore. I'd walked all over the house, going through every cabinet and cupboard. I searched the garage and even the closets while declaring to myself, "I KNOW that I have Bundt cake pans!" And as I always do, I wondered if perhaps someone had come in and taken them. Because Bundt cake pan thefts are on the rise.

But maybe it's not actually old age setting in. I've been pretty addled since I saw this ad on Craigslist:

Someone, somewhere is pantyhose crafting. Kind of makes the blood run cold, doesn't it? When this ad was posted, other people replied with accusations that pointed fingers at the poster for being a "pervert". They accused them of using crafting as a cover for wanting to sniff and do dirty things with hosiery. But what if they were wrong? I'm sure they had no idea of truly how deep a "pany hoes" perversion can actually run. 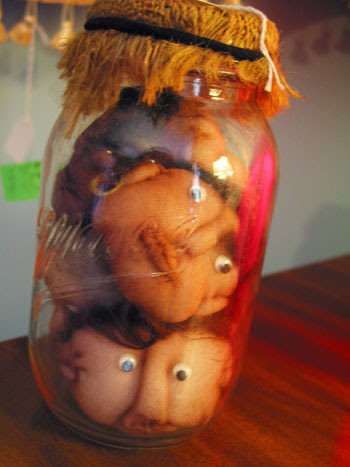 An actual item that someone was asking actual money for.

Someone recently asked me if I felt like a hypocrite for raging against pantyhose crafting when I'm some chick with "kitsch" in my name. And no.

Lord have mercy...where was I? Oh, that's right! My old age! My walking around in circles and searching today reminded me of this word play that I found a few years ago: 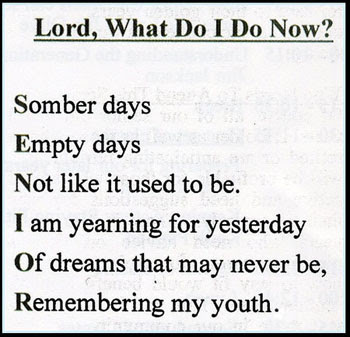 See what they did there by taking the word "senior" and turning it into a cry for help? Pretty joyous, huh? This was sent to me from a church who obviously thought that I was a senior citizen whose life had gone down the toilet. They had hoped that it might somehow encourage me to join their senior's group. Sure thing. Right after I get my head out of the oven.

You ever start reading one of my posts and wonder where I'm going with it? Me too! We'll just nip this in the bud right now. But not before this: 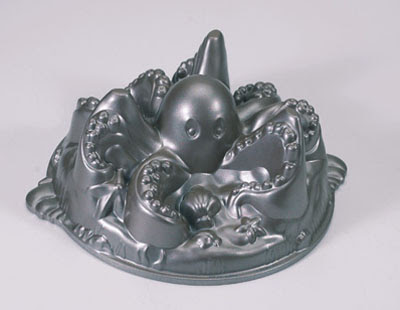 Octopus Bundt Pan!!
Apparently out of stock all over the world. Sigh.

it's so nice to see your face! now i know what you look like so i can spy you at goodwill or an estate sale. :) you look adorable! love your glasses! and i'm cracking up that you couldn't find your bundt pans. that's something i would do!!

And you can help me if you see me fighting some other old lady for a half used can of Comet from the 60's!

See I just wouldn't care about that - if someone gets their kicks out of old tights, well who am I to take that sunshine out of their day? Pany hoes sounds like some kind of ghetto slang that will take a few decades to reach the white youth of Croydon but will then be constantly muttered on the tram to girls out shopping.

What comes after the SENIOR acrostic - EUTHANASIA? Cheery!

So nice to see a picture of you! My co-worker and I read your blog all the time. We love it. You are a hoot!

Lakota: That's the way I am too. If it doesn't hurt anybody, then go ahead and do it. Unless it's pantyhose crafting! And yes, I think that the seniors are to confess all of their sins, give their money to the church and just wait for the angels to come get them. Oh, and you're showing up on my dashboard!

Stacy: Thanks! I'm pretty shy about the self portraits but today I was too tired from all of the pan hunting to fight it. Thanks to y'all for reading my blog! :D

hahah, i always play "guess what i bought today!" with travis, and he usually can't tell and i get so upset. you mean you didn't see the weird little handmade clay whale i put on the bottom shelf of the bookcase in our bedroom????(this happened last week)
panty hose crafts are one of the few weird things i'm not into. I do have a terrifying thing made of yarn, styrofoam balls, and a plastic baby face and hands that i need to post about. maybe i can sell it on craigs list.

That first pic is like a little I Spy game. Fun! So ... I spy with my little eye at least one Hazel Atlas Fantasy drinking glass (with groovy spaceboy images!).

Rae: Ha! That whale thing! :) And you KNOW that we have to see this mysterious terrifying thing!

Yay! I'm so happy to see what you look like. Your glasses are super cool <3

Arghh I need that octopus! No wonder it's out of stock everywhere, it's amazing. Hope your bundt cakes come out well! xx

Your bundt cake pan search thing happens to me all the time it seems, I guess it's all downhill from here Huh? I had better see if there are any openings in the senior assisted living center down the street from me......I'll be back to let you know how it went....if I can remember what blog I left this comment on that is. :D

That bit about missing the bundt pans (did the same thing, mine is hanging on the side of the cabinet ABOVE THE SINK in front of a WINDOW, for Heaven's sake) made me feel better till I read the poem, Eartha.

And that BUNDT! We have a Meijer just up the street! If they have any I'll snap 'em up and send one to you!

I washed my car windows last weekend and wondered why they were not cleaning up very well. Looked down and discovered the spray bottle in my hand was Febreeze. I feel your pain...

Oh, and the Pany Hoes person might want to devote less time to crafting and more time to learning to spell....

I would find this funny if not for the fact that you are my baby girl.
Oh yeah, im giving all my money to the church. dad

I love your blog, you are so funny!

I was spending the summer with my Aunt Ruth in Eastern Tennessee sometime in the 80s when we came across these panty hose potato people at a craft show. I guess they are supposed to look like a jar full of potatoes. With faces.

Aunt Ruth decided that we could make potato people with her old panty hose that very afternoon! The results were horrifying. Aunt Ruth laughed so hard she peed her pants. She later admitted that she wanted to make them because she knew the results would be amazingly entertaining. And she was right.

She might still have them somewhere. She is a hoarder. The very best kind of hoarder.

That is totally something I would do. Except maybe I'd be holding the bundt pan, wondering where I put it.

That octopus pan is so amazing, my head may have exploded a wee bit. Scary shrunken head pantyhose heads, however, eek. I am glad I haven't seen one of those in ages!

OMG that whole post was so effing hilarious...where to start?!?! Pantyhose can also be used for gardening. Tying tomatoes up and such. Maybe pantyhose are what old people use for a little senior bondage fun? I doubt it's for sniffing. The nose goes along with the rest of the body in old age or so I'm told.
You're really lovely...thanks for the eye candy of ye. Are you wearing pantyhose by any chance? Heeeeee

Panty hose crafts are almost as scary as spelling it "pany hoes." Maybe. Not as scary as the day I spent a half hour looking all over the house for my glasses and finally realized they were on my FACE. Not perched on top of my head (the way Barbie wore her sunglasses) but on my face. Still, please don't sign me up for the senior group. :-)

Thanks for the laugh--love reading your stuff.

1. I'm gonna need a red velvet octopus cake STAT
2. I also have many times posted makeupless pics online. I like the idea of setting people's expectations for what i really look like low.
3. my granny used to make sock dolls, I can imagine those panty head faces in a jar were also in her bag of tricks.

this post was all kinds of awesome. and as others have pointed it, it was nice to finally sneak a peek at the lady behind the blog ; )

Your comments, I love. GAH. I love. And can you believe it? I HAVE the octopus bundt pan. Oh yes I do. A 2007 Williams-Sonoma purchase.

Amazing to find such a reliable source of laughs! My husband is concerned about how much I keep crazily giggling at your blog! Thank you!

Just like the others, I like seeing your photo to pair your face with your writing. Love your cute glasses, home items and the adorable grandmotherly thoughts.

You came to mind recently when a older customer, at the garden center where I work, bumped her cart into something and remarked that she was "breaking up housekeeping!"

hello,any Southern gal should know that Bundt pans are ALWAYS on the wall. MOTHER OF GOD I want that octopus pan!